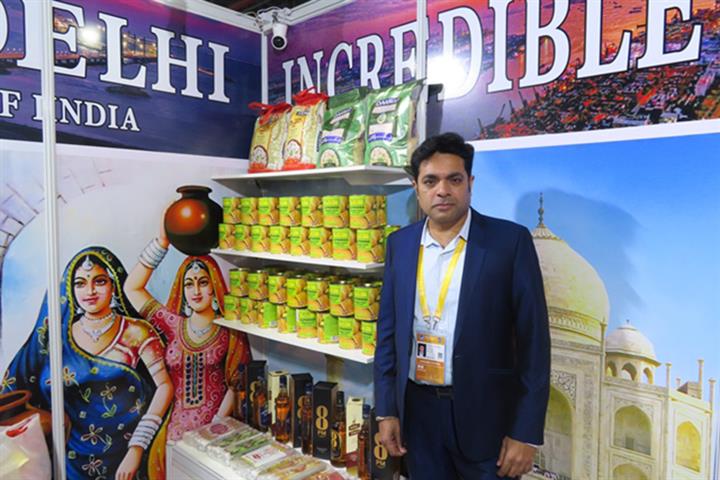 (Yicai Global) Nov. 10 -- Indian foods, such as sugar and mango juice, are gaining traction at the China International Import Expo and the two countries should get closer in business, according to an Indian merchant.

India needs a lot of Chinese products, and Indian products also sell well in China, so the two countries and their people should have more cooperation, Vikrant Jawharkar said to Yicai Global during the trade expo that is held in Shanghai.

Jawharkar has been working in the small commodity market of Yiwu for nearly 20 years but this is his first year at the CIIE. He brought Indian specialty foods such as sugar, rice, mango products, and wine to the expo, hoping to further expand in the Chinese market.

Du Yuegang, Jawharkar's partner in Yiwu and the head of Tony Logistics who has been doing business in India for more than 10 years, said that many customers are interested in Indian foods at the CIIE with preliminary purchase intentions. But Indian foods taste different from common Chinese foods, so platforms such as the CIIE are needed for consumer feedback, he added.

More than 70 percent of Du's customers are Indian business people. Tony Logistics aims to build a bridge to make trade between China and India simpler while helping small and medium-sized enterprises on both sides to promote and sell their products more smoothly, he added.

At the booth, Jawharkar is serving visitors mango juice from India. This is one of the most popular Indian products in China but customers also like mango jam, he said. Originally, Jawharkar only exported daily goods from China to India, but in recent years, his partners suggested he should also import Indian goods to China. Today, imports make up an increasing share of 40 percent of his business.

Among the products Jawharkar is displaying, the most popular one is sugar. Indian sugar is of good quality and low price, and it can be purchased in small amounts, he said, adding that he imports about 20 tons of sugar from India each month. The Indian government has recently implemented a system of sugar export quotas but Jawharkar has applied to join the program so the new policy has had a limited effect on his business.

Not all of Jawharkar's attempts have been successful. For example, Indian rice has mainly been attracting Indian and Middle Eastern expatriates in China but not so many Chinese clients. In the future, the businessman intends to bring more high-quality Indian products into China according to the needs of local customers.