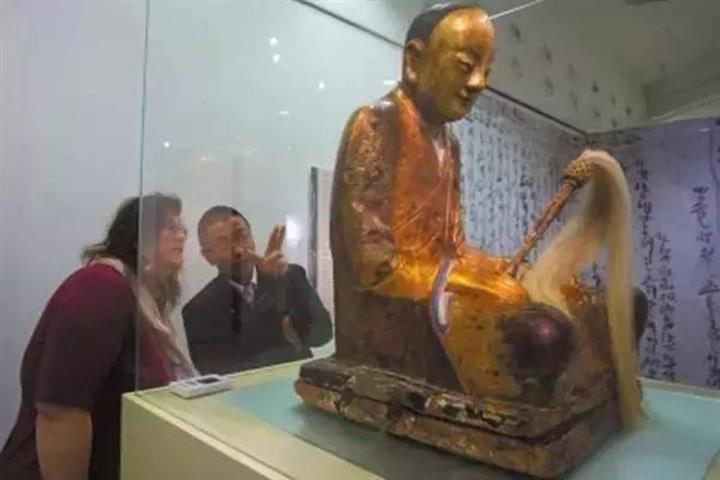 (Yicai Global) July 19 -- A Chinese court made a public verdict today on the case of a 1,000-year-old Buddha statue containing the mummified remains of a revered monk, upholding its original ruling ordering Dutch art collector Oscar van Overeem to return the relic which was stolen from a village shrine in 1995.

The Fujian High People’s Court said the statue, which contains the mummy of Song Dynasty Buddhist monk Zhang Liuquan, known as Patriarch Zhanggong, was stolen and illegally exported. The court cited van Overeem as saying he bought the statue in Amsterdam in 1996, but he did not provide any evidence of the transaction.

The statue was taken from a shrine in Yangchun village in the city of Sanming in China’s southeastern Fujian province. It should be returned to the village according to the law and in view of the relic’s emotional significance, the court said.

Lin Kai’an, a representative of the villagers, thanked the Dutch collector for keeping the statue in perfect condition for many years and looked forward to Patriarch Zhanggong coming home to Puzhao temple. “He’s like one of our relatives, and is also what we believe in,” Lin said.

Outside the courtroom, Fan Dingbao, a lawyer representing the villagers, said he hoped van Overeem would obey the order and return the statue as soon as possible.

In October 2014, the Hungarian Natural History Museum held a ‘Mummified World’ exhibition and one of the exhibits, a statue containing the remains of a Chinese Buddhist monk from about 1100 CE, drew the attention of overseas Chinese living locally and the media.

In March 2015, reporters from China’s Global Times and other news outlets who visited the museum believed the statue was the missing artifact after close observation and comparison. As a result, the museum announced on March 19 that the statue would be removed at the request of the collector.

The media also found out that the statue was in van Overeem’s possession and was exhibited via the Drents Museum in Assen, and had been on display for half a year as of 2014.

On March 24, 2015, China’s historical and cultural artifacts agency identified the ‘Buddha statue holding a monk’s mummy’ that was kept by the Drents Museum to be a “stolen relic.” The National Cultural Heritage Administration of China subsequently launched a track and retrieve procedure

The villagers filed lawsuits and claims for compensation in Fujian and the Netherlands in 2015 and 2016, respectively. In December 2018, a court in Amsterdam issued a written ruling stating that the case was inadmissible.

In 2022, van Overeem was cited as saying that the statue had been traded, but lawyer Fan believes there is no evidence to prove the deal.