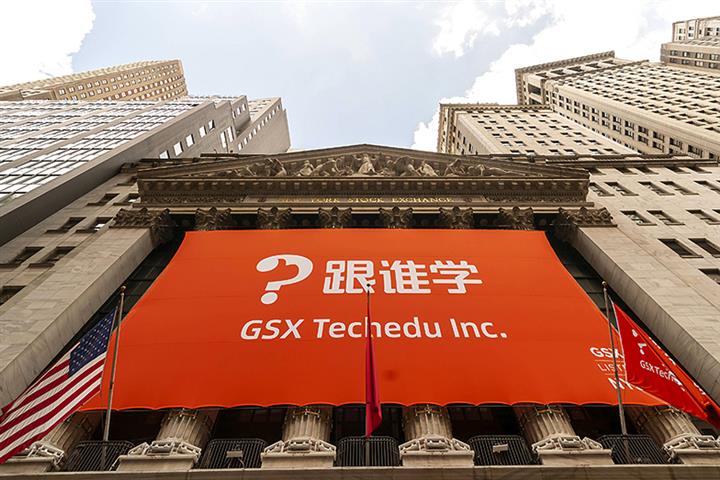 (Yicai Global) April 15 -- The stock price of Gxs Techedu, a Chinese online education firm targeting kindergarten to 12th grade, plummeted yesterday after US short seller Citron Research claimed the company overstated its revenue in a report. This is the second short seller Gxs has faced in one week as Grizzly Research claimed the company was guilty of accounting fraud last week, which triggered a slide in its share price.

Gsx responded that Citron Research knows nothing about the firm's business and sources of income.

Citron noted in its report yesterday that it detected a huge number of fake accounts among Gsx's users after tracking more than 20 percent of the e-educator's lessons, adding it estimated that Gsx's revenue was overstated by 70 percent last year.

The short seller claimed Gsx said in its annual report that its income rose by 432 percent last year, but the education company is rarely mentioned in Chinese media in the e-education sector, and it therefore questions this figure's credibility.

Gsx shares [NYSE:GSX] slumped over 8 percent yesterday after Citron released its report. The stock swiftly rebounded shortly after, however, and closed at USD31.2 today, down only 0.64 percent, giving it an overall market cap of about USD7.4 billion.

Gsx said Citron used much of Grizzly Research's content, which had been refuted by the company's management team with proof to counter its accusations. The report also indicated ignorance of the fact that much of Gsx's K12 business income is from its Gaotuketang brand, Gsx said.

Founded in 2014 by Larry Chen, a former executive president with leading Chinese educational institution New Oriental Education and Technology Group, Gsx listed in the National Association of Securities Deal Automated Quotations in the US last year.

Short seller Grizzly Research released its report in February, in which it claimed the e-educator exaggerated its 2018 net profit by three-quarters during its initial public offering by overstating the number of its students and purchase orders.

Gsx disclosed its financial details for last year in an investors' conference call on April 9 to disprove Grizzly's short-selling report. The Chinese e-educator's business revenue grew annually by 432.3 percent to USD304 million last year, with corresponding net profit increasing by over 10-fold to USD32.5 million, the 2019 annual report it released on April 3 shows.