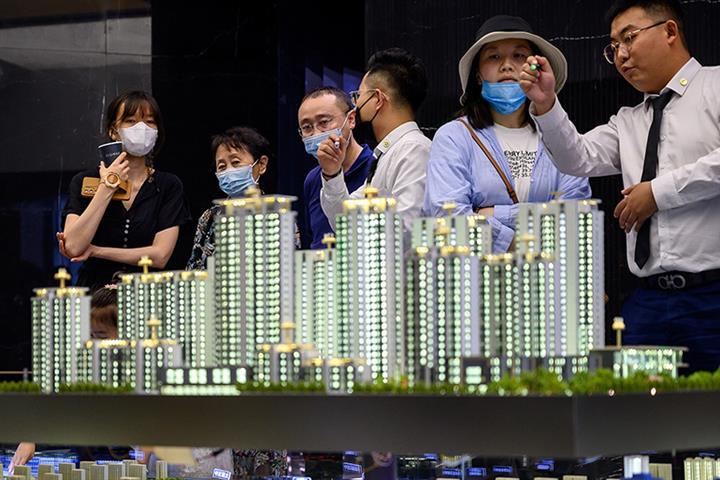 (Yicai Global) Dec. 2 -- Just 20 real estate developers in China are expected to reach sales of CNY100 billion (USD14.17 billion) this year, down from 43 last year, due to the resurgence of the pandemic and weak market confidence, The Paper reported today, citing a report released by CRIC China.

Among the big listed property firms that publicly disclose annual sales targets, most had achieved less than 80 percent as of the end of November, and for many it was below 70 percent, with some seeing a drop of more than 20 percentage points from a year earlier, the report said.

Commercial housing sales may shrink to less than CNY14 trillion (USD1.98 trillion) this year. Government relief policies have been “exhausted” and they have had a limited effect on the promotion of sales, CRIC China said.

The country’s state-owned enterprises and high-quality private firms are benefiting from the gradual recovery of credit, bond and equity financing, but most developers are still facing heavy debt repayment pressure, and the key to improvement for them lies in sales. While sales remain weak, developers can only wait for demand to improve, the report said.

Looking to the future, CRIC China believes that confidence will eventually rebound and potential home buyers will emerge, with the market likely to bottom out in the second quarter of 2023.

The situation in first- and second-tier cities remains stable, with better-performing second-tier cities such as Hangzhou and Chengdu getting a boost from local policies to lift purchase restrictions to support market confidence in the short term. For the weaker second-tier cities and most third- and fourth-tier cities, the pace of housing market recovery will lag behind significantly.