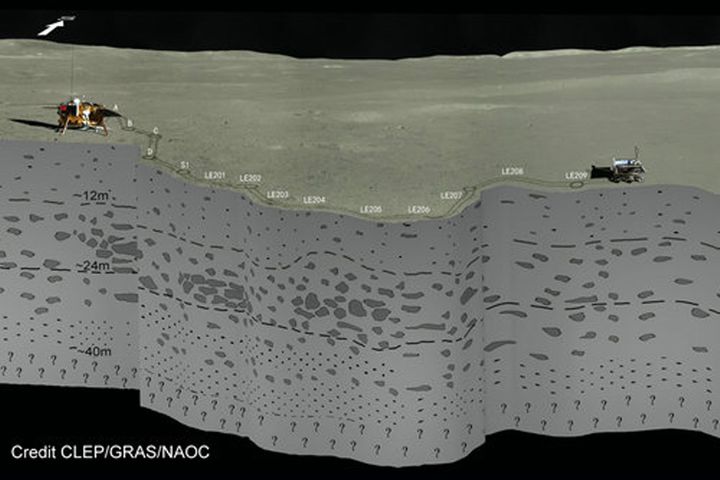 (Yicai Global) Feb. 27 -- A team of Chinese scientists has become the first to uncover the underground secrets of the far side of the moon.

A research team at the National Astronomical Observatories found that the moon's internal structure consists of three distinct layers after China's Yutu-2 lunar rover used radar to probe 40 meters below the surface. The discovery will provide significant data for research on the geological evolution of the moon.

The team said the findings are very significant for understanding the transformation of the lunar surface by meteorite impacts, as well as the scale and history of activities linked to craters. The work has also laid the foundation for research into the geological evolution on the moon's far side.

Chang'e-4 was launched into space on Dec. 8, 2018, carrying Yutu-2, which became the first rover to land on the moon's dark side on Jan. 3 last year. On Feb. 18, Chang'e-4 ended its most recent lunar night hibernation and entered its 15th lunar daytime work period. It is the longest-running probe on the moon's surface.

China initiated its lunar exploration project in 2004 and named it Chang'e Project after a mythological figure. The country has so far launched two moon-orbiting satellites and two unmanned rovers. It plans to launch a third unmanned rover around the end of October, which will automatically sample and return from the moon for the first time.