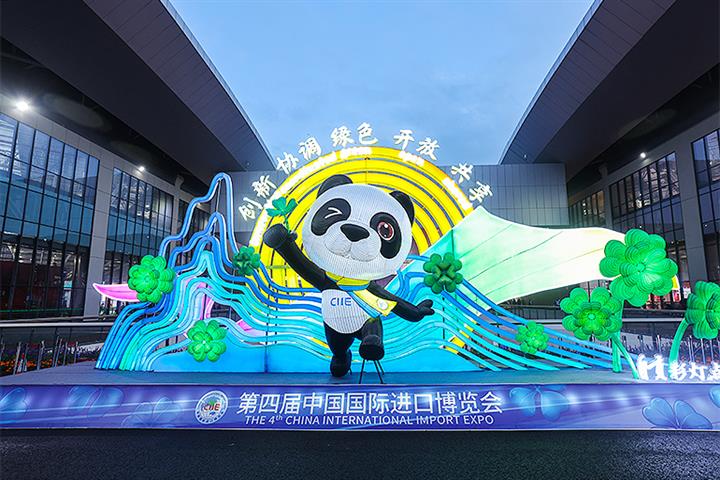 (Yicai Global) Nov. 10 -- Faced with multiple challenges, such as the Covid-19 pandemic, climate change and raw materials shortages, multinationals are speeding up and deepening their localization strategies in China.

The fourth China International Import Expo, which concluded today, has seen these enterprises upgrade and adjust their business strategies in the country.

Take Dutch health technology giant Philips for instance. With its Chinese headquarters in Shanghai, Philips has four global manufacturing bases and many research and development bases in the nation.

The Philips Medical Imaging China Base in Suzhou, Jiangsu province, is an important example of the company’s localization strategy in the country and is its only comprehensive imaging product base worldwide, said Li Tao, vice president of Philips China.

The base specializes in developing and producing imaging systems which meet the needs of domestic and worldwide needs.

Li said that Philips China is talking with the company’s headquarters about locating the global HQ of some businesses in China to set up product, system and software centers by integrating global and local resources to improve the firm’s ability to innovate in the country.

France’s BioMerieux set up its regional center and foreign-funded research and development center in Shanghai in recent years. Lu Guoping, the firm’s vice president of Public Affairs and Market Access, told Yicai Global that many of its products are “tailored for China.” For example, a drug sensitivity card based on Chinese doctors’ prescribing habits.

In the technology and equipment exhibition area of the CIIE, five products developed by Japan’s Nachi-Fujikoshi together with Chinese high-tech firms were on display. They included an automation solution for nucleic acid detection sample pipetting developed with Shanghai BioCSi Tech, and a self-planning, ultra-high-speed flexible flying robot camera co-developed with Changzhou Micro Intelligence Tech.

Nachi-Fujikoshi sells its products in 17 countries and regions, and China is its largest overseas market, accounting for about a half of its overseas sales. The CIIE is a comprehensive expo and brings the firm not only orders but also cross-industry customers, who are more important.

As the biggest exhibitor in daily-use chemicals that has attended all four CIIEs, L’Oreal announced in March that it would upgrade Shanghai as its North Asia headquarters to expand the French group’s brands and products in the Chinese market.