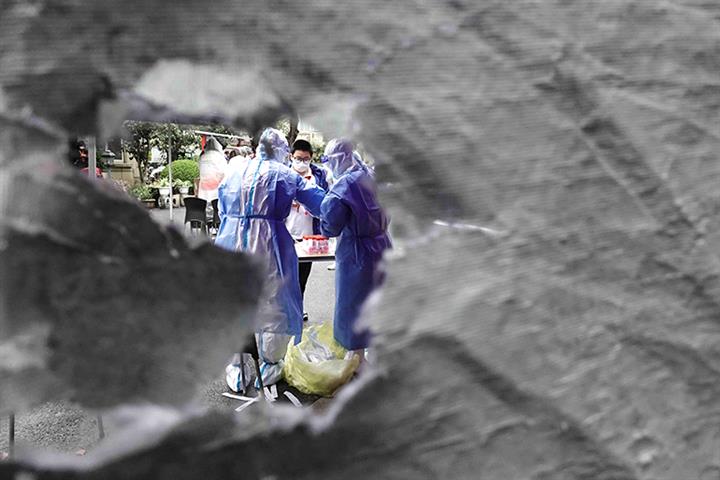 Covid: A Tale of Two Cities

We are locked down again.

Last week, our compound was locked down for 24 hours so that we could all be tested for Covid. We got our results quickly and, since everyone was negative, we were free to go about our business. This week, the entire Tangqiao district in which we live is locked down for testing.

Throughout the month of March, Shanghai’s Covid cases — almost entirely of the asymptomatic variety – have surged to close to 1000 per day (Figure 1). The outbreak has led the local authorities to redouble their efforts to contain the virus’s spread. 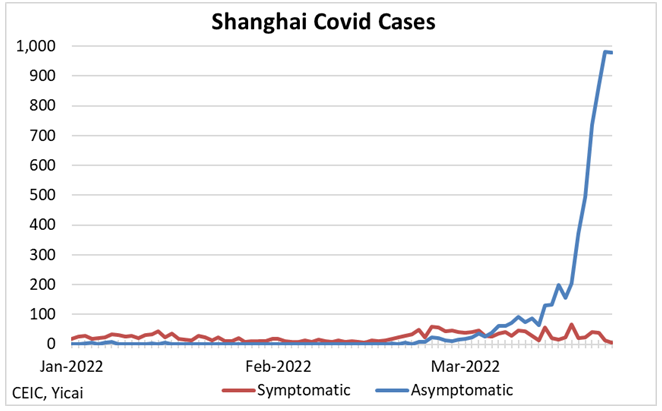 On March 23, Wu Jinglei, the Director of the Shanghai Municipal Health Commission, held a press conference at which he discussed his strategy for screening and control on a “district-by-district, neighborhood-by-neighborhood and building-by-building basis”. He appeared to suggest that a city-wide lockdown was not necessary.

Many residents are frustrated by the unpredictability of the city’s Covid management procedures. Some point to the mild nature of the asymptomatic infections as evidence that China’s "zero-Covid" measures are no longer necessary and suggest that, like many Western countries, China should learn to live with the pandemic.

Our family, including my wife’s 95-year old grandfather, is locked down in different parts of the city and we are unable to support each other during the outbreak. Thus, it is easy to sympathize with the sentiment that strong Covid management measures are too troublesome. Nevertheless, I think things could turn out much worse if China chose to implement a more lenient policy response.

Asymptomatic cases have become the dominant form of infection in Shanghai because the Omicron variant is more transmissible but less virulent than previous strains. In addition, the rate of vaccination is high here and the vaccines are better at mitigating the severity of the infections than preventing them altogether.

It is certainly positive that people can go about their lives normally while suffering from asymptomatic cases of Covid. Still, these people are able to extend the spread of the pandemic, in large part, because they don’t know that they are infected and they do not take measures to isolate themselves. Infections spread by asymptomatic individuals can still damage the health of the very old, the very young and those whose immune systems are compromised. So, these asymptomatic cases need to be taken very seriously.

A tale of two cities– Xi’an and Hong Kong – well illustrates the difference that public health measures can make in controlling Covid. Xi’an and Hong Kong are both large cities with populations of 13 million and 7.5 million respectively and they have fairly comparable per person levels of beds, doctors and nurses.

In Xi’an, the authorities acted forcefully to bring Covid under control. As the number of infections grew, they implemented a mass testing program designed to evaluate each of its residents. On December 23, 2021, the authorities locked the city down, forbidding unnecessary travel. Every two days, a single person from each household in uninfected neighborhoods was allowed to shop for the family. High-risk areas were sealed. The authorities maintained the lockdown for a full month. The Hong Kong government did not implement mass testing nor did it impose a city-wide lockdown. It relied instead on a series of more ad hoc measures, which were often poorly communicated to its residents.

It is hardly surprising, then, that Xi’an’s and Hong Kong’s experiences with the virus were very different. To compare outcomes in the two cities, we track Covid’s trajectory from the day after a 20 new-infection threshold (seven-day average) is breached. In Xi’an that occurred on the day the lockdown was imposed. In Hong Kong, it occurred on January 24, 2022. Both of these dates are indicated as Day “1” in Figure 2.

Infections in Xi’an peaked eight days after Day “1”. In Hong Kong, the peak was reached after 40 days. Moreover, peak infections in Hong Kong were 200 times as high as they were in Xi’an and cumulative infections over the first 58 days were just over 1,800 in Xi’an and over 267,000 in Hong Kong. Even now, Hong Kong reports close to 1000 new cases a day. Some of the difference in the infection rates is likely due to Xi’an having been hit with the Delta variant, while Hong Kong battled Omicron. Sadly, there were 6,356 Covid-related deaths in Hong Kong in the period depicted in Figure 2, while there were none in Xi’an, even though the Delta variant is more deadly.

Things did not work out perfectly in Xi’an. The lockdown imposed huge logistical difficulties on the city. Shortages of food and other daily necessities were reported. It was sometimes hard for people to obtain medical care. Despite these hardships, the outcome in Xi’an was vastly superior to that in Hong Kong and it demonstrates the benefit of strong public health measures.

Preserving public health also has an economy-wide cost. This month, China’s mobility measures show a significant reduction in traffic congestion, compared to March 2019 and March 2021 (Figure 3). This points to a lower level of economic activity this month, compared to a year ago.

The traffic congestion measures we use here come from Amap (高德), a Chinese mapping, navigation and location-based service provider. We compose an index from the readings for China’s 30 largest cities. Each city is weighted by its economic importance. 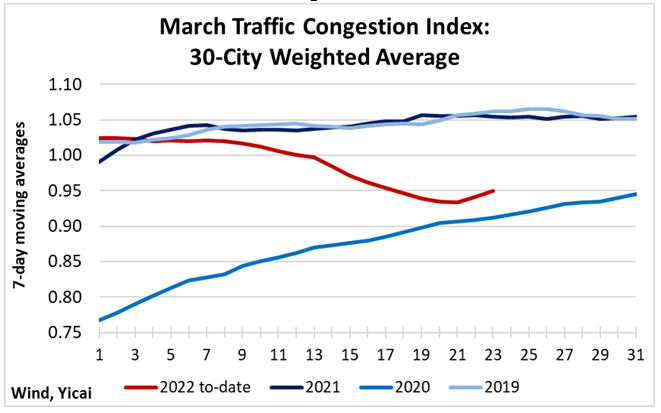 It is good to see that the mobility indicators are turning up. Still, their decline in the first three weeks of the month, suggests a slowing in our monthly GDP proxy for March, likely to below 4 percent. Given the strong outturn in January-February, GDP growth for the quarter as a whole would still come in at close to 5 percent.

The near-term outlook for the Chinese economy depends crucially on how fast the new Covid outbreak is controlled. The market currently expects Covid to have a fairly small effect and the economy to recover rapidly. Respondents to Bloomberg’s latest survey now expect China’s GDP growth for the year to come in at 5.1 percent, or only a touch lower than the 5.2 percent they forecast at the beginning of the month.

We are told that if none of the residents of our compound is infected, we will be able to resume our normal lives in a couple of days. Indeed, we are looking forward to a rapid recovery in our personal lives as well.