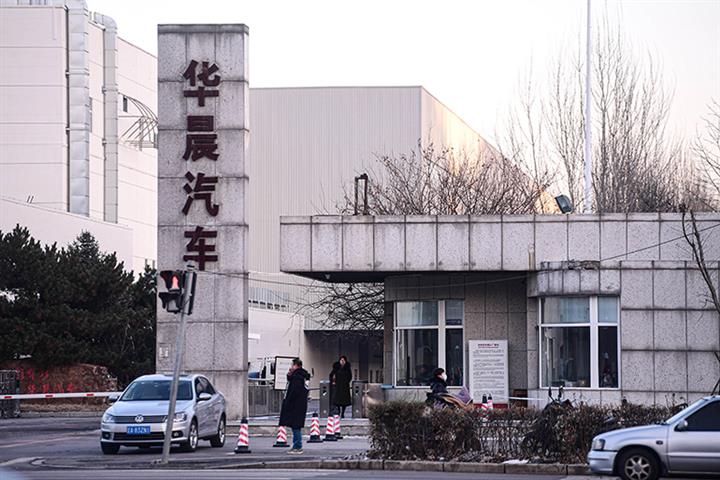 (Yicai Global) Nov. 26 -- Bankrupt Brilliance Auto Group’s headquarters in Shenyang, northeastern Liaoning province are a hive of activity as creditors line up to claw back funds, a visiting reporter from Yicai Global said.

China Merchants Securities, Hana Bank, Huaxia Bank, Harbin Bank and Shengjing Bank had all signed into the building within a period of one hour on Nov. 24, a few days after the carmaker was declared bankrupt, the reporter said. There were many vehicles parked outside, including police cars, he added.

“It might have already gone in liquidation,” an employee at a subsidiary firm told the reporter.

"We have visited Brilliance Auto and have been informed of the current state of affairs,” a member of the credit department of the Shenyang branch of a joint-stock bank said. “We are not yet at the stage of debt collection,” he said, adding that the process is proceeding smoothly.

Another representative from the Shenyang branch of a foreign bank went to the building, but is not too concerned as the bank has only lent a small amount to Brilliance Auto, he said.

No one from Brilliance Auto’s financial department was available for interview. It is certainly unusual for staff to refuse to face the media and to have no comment to make, other employees told the reporter.

Brilliance Auto, which has CNY52.4 billion (USD8 billion) in liabilities, was plunged into turmoil last week when supplier GZ Tooling Group pulled the plug and applied to the People’s Court in Shenyang for its bankruptcy and restructuring. The application was accepted on Nov. 20 and the firm was declared bankrupt.

The insolvency will not involve subsidiary firms, including the joint ventures with German auto manufacturer BMW and French carmaker Groupe Renault, which are independent entities, a company insider told Yicai Global earlier.

However, it has shaken unit Shenhua Holdings, itself heavily in the red, which on Nov. 23 announced that it was to sell its stakes in seven wind and solar energy plants in order to free up some cash as the Shanghai-based firm has guaranteed CNY446 million (USD67.8 million) of Brilliance Auto’s debt.

Brilliance Auto is expected to bounce back after the restructuring and make up some of the losses to creditors. The firm is heavily dependent on its JV with BMW, its only profit-making business. In the first half, BMW Brilliance Automobile contributed CNY4.4 billion (USD671 million) in net profit, while the group’s total profit came to CNY4 billion, indicating that the rest of the company’s businesses ran up a deficit.

Brilliance Auto has three car marques of its own, Zhonghua, Jinbei and Huasong, and two JV brands, BMW Brilliance and Renault Brilliance.

The Jinbei and Renault Brilliance factories are in the same industrial park as the parent firm’s headquarters. Work seemed to be continuing as normal, the reporter said.

The situation, though, was quite different at the Zhonghua plant across the street.

“Zhonghua is in chaos,” an employee told the reporter. Workers are only getting basic wages. The company has not paid the provident funds of some staff. Some have taken on part-time jobs, such as ride-hailing car drivers and food delivery men. Others have already jumped ship to the Renault JV, he added.