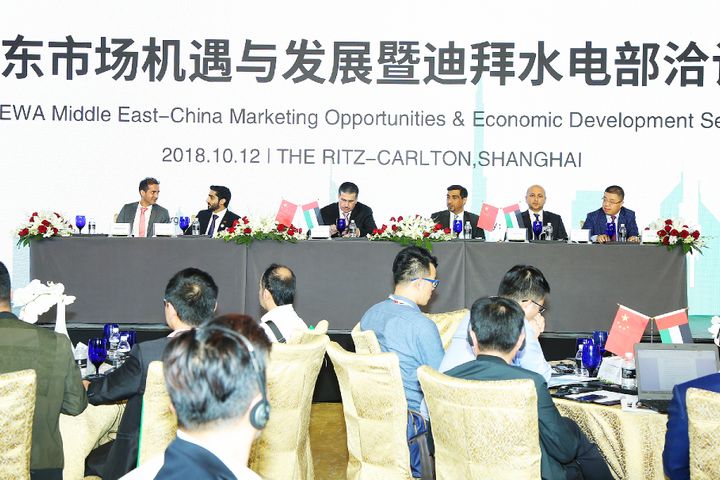 (Yicai Global) Oct. 15 -- The Dubai Electricity and Water Authority, which exclusively supplies the capital of the United Arab Emirates, is looking for Chinese partners as it moves ahead with plans to generate more power from green energy sources.

China and Dubai have strong ties and the Middle Eastern city wants to enhance them as China pushes forward with its Belt and Road Initiative, DEWA's Managing Director Dr. Saeed Al Tayer said on Oct. 12 at an event held in Shanghai to promote Dubai to Chinese companies.

As well as helping China with its plans to build an extensive trade route across multiple continents, developing new partnerships will bolster Dubai's efforts to become one of the most sustainable cities on the planet.

Over the next 30 years, DEWA plans to invest around AED30 billion (USD8.2 billion) into the Dubai Clean Energy Strategy 2050, said Waleed bin Salman, executive vice president of business development and excellence. It expects to generate a quarter of its power from solar by 2030, and by 2050 it hopes renewables will account for three quarters of its electricity output.

The city has already made steps toward becoming more sustainable and its ruler, Sheikh Mohammed bin Rashid Al Maktoum, commissioned the world's largest single-site solar park for Dubai in October 2013. The facility, which is named after him, aims to have a 5,000 megawatt capacity by 2030, with a fifth coming from concentrated solar power.

The event was organized by MIE Events DMCC, an exhibition, trading and consulting organization.

On behalf of DEWA, MIE held DEWA Middle East-China Marketing Opportunities & Economic Development Seminar in Shanghai which brought a rare opportunity for Chinese companies to do business with DEWA purchasers face to face in China.

Concentrated solar power uses mirrors and lenses to focus large areas of light into a smaller area to generate heat that drives a steam turbine or starts a thermochemical reaction. At 260 meters high, the park hosts the world's largest mirrored solar tower. It also produces electricity at 7.3 US cents per kilowatt-hour, cheaper than anywhere else on the globe.

Only a few countries have perfected the technology, and China proved its worth in the sector last week when it became the eighth nation to open a concentrated solar power plant. The 200 megawatt-hour facility is located in the Gobi Desert in Qinghai province, and is one of 20 solar thermal plants that China's National Energy Administration plans to build in the country's western provinces.

"We want Dubai to be the smartest city in the world," Waleed said, and the city is so far making good on that goal. It opened the first ever 3D-printed office building in 2016 -- which took just 17 days to build -- and DEWA built a 3D-printed research lab last year, which will be used to study the technology that created it as well as unmanned aerial vehicles, better known as drones.