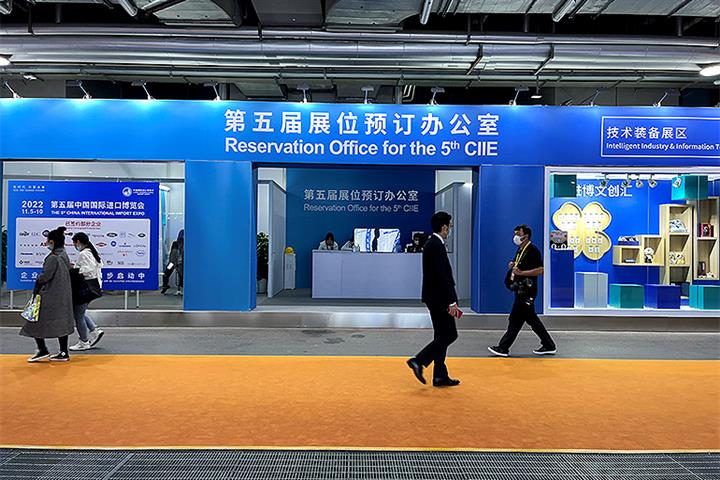 (Yicai Global) Nov. 11 -- The value of signed contracts decreased during the fourth China International Import Expo amid the Covid-19 pandemic but that hasn't stopped many exhibitors from signing up for next year's event.

Enterprises have booked more than 150,000 square meters of exhibition area, which is more than the reservations made when the trade event finished last year, according to Sun. On the second day of the 2021 expo, some 50 firms and institutions, including Danone and Swarovski, penned agreements to participate in the next CIIE.

The nationwide trade event has made foreign companies increasingly interested in China.

"We are a participant and a beneficiary of the CIIE," Liu Guoping, chairman of Japanese financial service giant Orix Group's Chinese branch, said to Yicai Global. Orix will increase its investment in China, he added. The CIIE will attract more international capital to China, Liu predicted.

TUV has never stopped investing in China, said the CEO of the firm that has participated in all the past CIIEs. Even when the Covid-19 pandemic was most rampant, TUV kept raising its investment in China, said Fübi. Chinese companies have the largest overseas layout, with the largest scale of investment, which will be even larger in the future, he added.

This year’s CIIE attracted companies from various different backgrounds. The number of Fortune 500 companies and industry leaders attending the expo tallied 281, and nearly 40 of them were first-timers. More than 120 of the group have been part of all the four CIIEs, said Sun.

In some ways, the event was bigger than before. Some 2,900 companies from 127 countries and regions participated in the business exhibition this year, with an exhibition area reaching 366,000 sqm, a record high. They were showcasing more than 420 new products and services. The product launch zone accommodated 123 new releases done by 62 firms with global debuts making up a high share of the total.