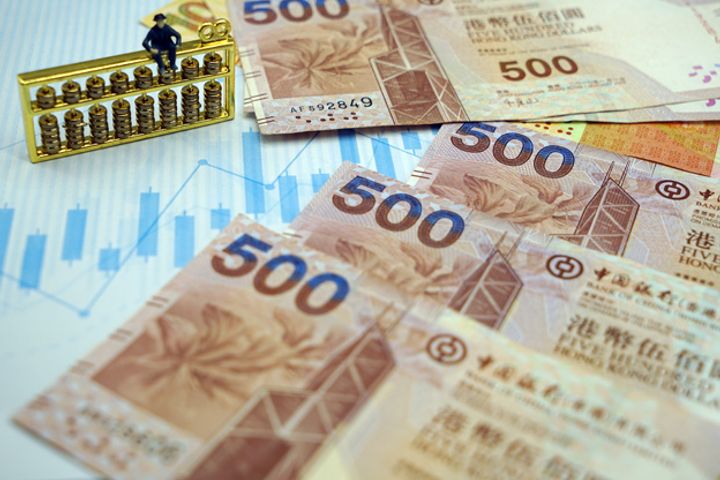 (Yicai Global) Aug. 15 -- Hong Kong's monetary authority intervened in the exchange rate of the Hong Kong dollar for the first time since May after the rate hit the lower limit today.

The Hong Kong Monetary Authority bought HKD2.159 billion in the market, which exacerbated concerns about liquidity and caused downward pressure to the Hong Kong bourse.

Hong Kong's Hang Seng Index began to fall rapidly after opening. At the close, the benchmark had declined 1.55 percent to the lowest point since early October last year.

"From the recent rapid expansion of the London Inter-bank Offered Rate and the Hong Kong Inter-bank Offered Rate spread, and the decline of emerging market currencies against the US dollar, the lower limit to trigger HKMA to defend its linked exchange rate system is likely to continue in the future," Zhao Wenli, chief strategist at CCB International, told Yicai Global.

CCB's Hong Kong liquidity index has deteriorated again, Song Lin, a strategist at the company said. "Capital outflows occurred in 17 out of 24 industries. Among them, the sectors with the largest capital outflow are software, automobile, and transportation."

The intervention by the HKMA may be just the beginning. In the future, the US Fed's continuing interest rate hikes, a stronger US dollar, and capital outflows from emerging markets are likely to continue to put pressure on the Hong Kong dollar, market analysts predicted.

"The key issue is interest rates," Zhou Hao, an economist at Commerzbank, told Yicai Global. The special administrative region follows the US monetary policy so the Hong Kong dollar's interest rate should theoretically follow the rise in the Fed rate hike cycle. However, the current situation is exactly the opposite. The Hong Kong dollar interest rate has been in a downward trend this year, while widening the interest spread between the two currencies.

The Hong Kong Special Administrative Region government has implemented the linked exchange rate regime and the currency board system since 1983. In the past 30 years, it has successfully stabilized the currency despite encountering repeated crises.