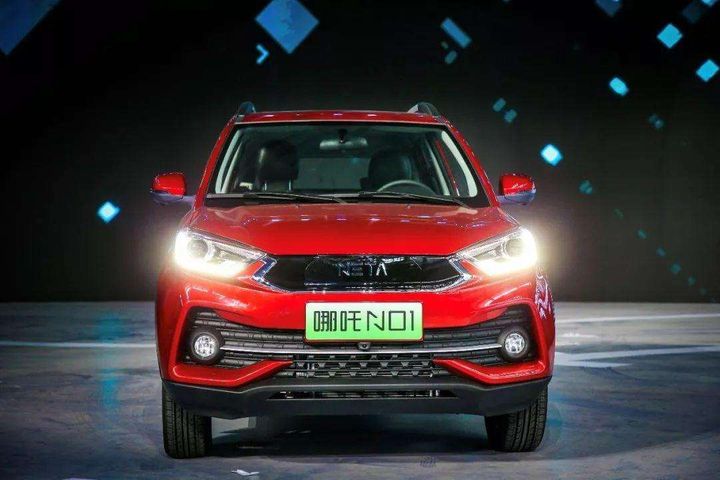 Hozon revealed its first sport utility vehicle Neta N01 at a factory in Tongxiang, the Zhejiang-based electric car firm said in a statement. The sales are expected to start by the third quarter this year.

Hozon's goal is to sell more than 100,000 cars in total by 2020 and strive to rank among the top ten new energy vehicle manufacturers and among the top three new auto firms in China, company President Zhang Yong told Yicai Global.

Rivals in the Hot NEV Market

This year marks a milestone for China's online order-based car startups as Qiantu Motor, Xiaopeng Motors, as well as NIO who all have begun to mass-produce their first models. Two other competitors, Byton and Singulato Motors, are still gathering their forces to produce en masse.

Hozon's second and third models will enter the market by the end of 2019 and by 2020, Zhang said. The cars that the firm will roll out in the next three years will be able to stretch up to 600 kilometers on one charge and the power consumption for 100 km will be as low as 10 kilowatt-hours. Neta N01 can go over 300 kilometers on one load according to the New European Driving Cycle test and recharges up to 80 percent within 30 minutes.

Hozon has received over 54,000 supply orders for Neta N01, while 42 percent of these orders are for corporate clients and the rest is for individual consumers.

The target groups range from well-off urban populations, including migrants, who value freshness and new user experiences, as well as youth in small towns who are upgrading their consumption habits, Zhang said. The prices start below CNY200,000 (USD29,400).

Hozon's Tongxiang factory was completed this May, with a planned annual capacity of 80,000 vehicles through an investment of CNY1,2 million (USD170,000) during the first phase.

Hozon has an independent production license, which is a major advantage in comparison to rivals who mostly rely on manufacturing through contracting. Whether the firm will become successful, the market will be the final judge, Luo Lei, deputy head of the China Automobile Dealers Association, told Yicai Global.

Consumer response will be the top priority following the debut of a new car, Luo said, adding that for instance Tesla gained more popularity after the deliveries kicked off.