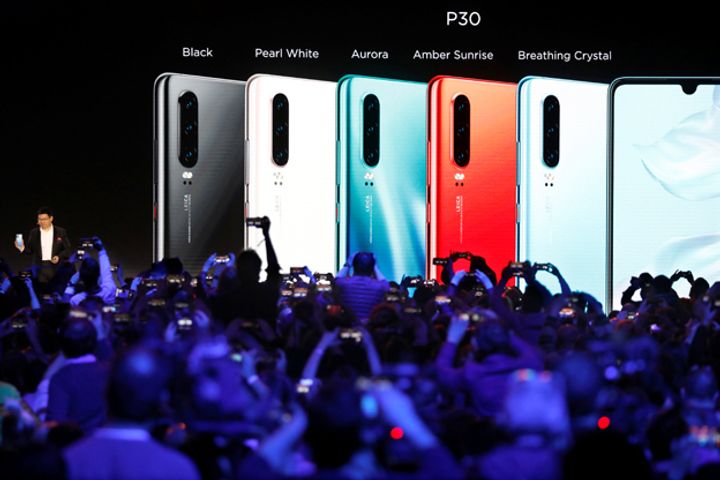 The Shenzhen-based company launched the P30 and P30 Pro at a major event in Paris yesterday. With a starting price of EUR799 (USD903), they use both ultra-sensitive sensor and periscope lens and allow 10-times hybrid zoom and a maximum zoom of 50 times.

Photographic zoom technology has become a hotspot in the sector and the focus of research and development by phone makers this year. Annual shipment of the P30 range may hit 30 million-plus, a market insider forecasts, adding that the versions with 10-times zoom may account for one-third of the total and the entire sector may expand very quickly under Huawei's influence.

The P30 Pro has four ultra-sensitive Leica lenses: an ultra-sensitive lens, periscope telephoto lens, ultra-wide-angle lens and time-of-flight lens, according to the company.

The main advantage of periscope lenses is that they save space so the handset can be slim while ensuring zoom function. The periscope lens also has more optical conversion components than other lens types and can, achieving very high optical zoom ratios.

At the start of this year, Chinese rival Oppo Electronics demonstrated its latest 10-times hybrid optical zoom technology at the Mobile World Congress in Barcelona, Spain.

As mobile phone makers push ahead with upgrading their handset cameras, the market is expected to grow to USD45.7 billion in 2024 from USD27.1 billion last year, according to a recent report by Tianfeng Securities. With periscope lenses becoming the norm, that market is likely to reach 400 million units in 2020 and be worth CNY150 billion (USD22.34 billion) based on an average unit price of about CNY400 (USD60).

Although the mobile phone industry, as the lens sector's downstream, is seeing slow growth, its market size is huge and there is still space for further development. The risk is that the yield of periscope lenses will be smaller than expected, with potential price and quality issues also affecting shipment and sales, Tianfeng Securities added.