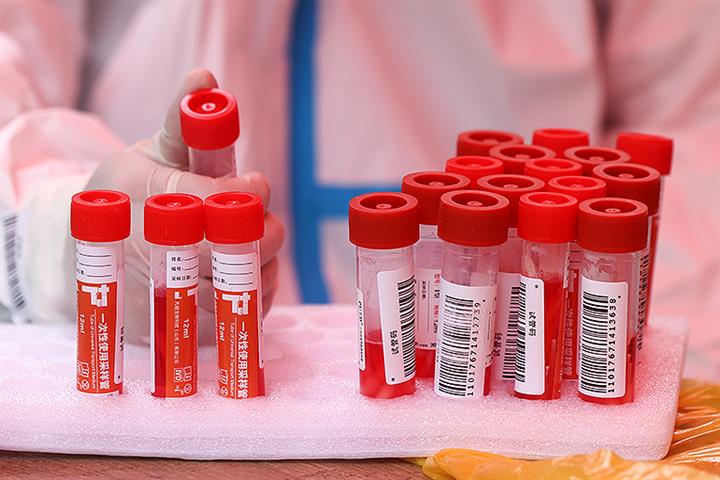 (Yicai Global) July 18 -- Shanghai Kehua Bio-Engineering, Lepu Medical Technology and other Chinese Covid-19 detection kit manufacturers are forecasting an up-to-90-percent plunge in profit in the first half from the same period last year as the Chinese government calls for prices to come down more and steps up the monitoring of quality controls.

Kehua Bio-Engineering’s first-half profit could crash as much as 90 percent from the year before to CNY35 million (USD5.1 million), the medical device maker said on July 14.

Net profit at Lepu Medical may sink between 20 percent and 30 percent over the period to between CNY1.2 billion (USD180 million) and CNY1.3 billion, the Beijing-based company said the same day. Of this, income from its Covid-19 testing businesses could dive 80 percent.

In May, the Chinese government asked testing agencies to further cut the price of nucleic acid tests to no more than CNY16 (USD2.40) each, less than half what they cost at the beginning of the year. And last month, the country’s cabinet ordered a nationwide probe into testing agencies following the frequent reporting of inaccurate test results. Some 238 labs have been told to smarten up their acts and 15 have had their licenses revoked so far.

“Tighter oversight and stricter quality control requirements have pushed up the operating costs of novel coronavirus testing laboratories while revenue is shrinking,” said Lu Hongzhou, president of the Third People’s Hospital of Shenzhen. “This will cause some smaller labs to withdraw from the industry.”

Even though the market share of EasyDiagnosis Biomedicine’s test kits is increasing, pricing was lower in the second quarter than in the first quarter, the Wuhan-based medical reagent maker said on July 15.

To make up for the lack of manpower and testing labs, automated facilities, such as nucleic acid sampling robots, mobile testing vehicles, detection gas membranes and makeshift labs, will be on the rise. “It is urgent to improve the automation of lab testing as the higher detection efficiency and fewer man-made errors means it has a promising future," Lu said.