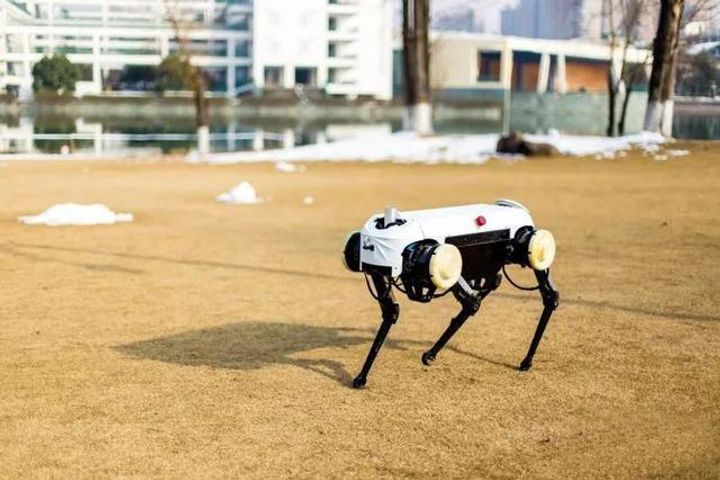 (Yicai Global) Feb. 13 -- A research team at Zhejiang University has released a video of a newly developed type of quadruped robot, and aims to rival more mature products like the BigDog, developed by former Alphabet Inc. unit Boston Dynamics, in the future.

The university, located in Hangzhou, provided a demonstration of its four-legged robot Yuejing, named after a famous warhorse in ancient Chinese history, in which it climbed over obstacles and walked through snow.

Jueying is capable of carrying 20 kilograms and can walk up to six kilometers per hour with a total battery time of two hours, said team member Dr Li Chao.

The quadruped currently requires manual control through human direction, though there are plans to develop an intelligence brain system this year so that it can move autonomously and gain awareness of its environment and potential obstacles.

The robot could be used in a range of practical applications in the future such as security patrols and search-and-rescue operations in natural disaster areas, said one of the project's leaders Professor Zhu Qiuguo, adding that one day such robots could be used to explore other planets.

Separately, U.S. firm Boston Dynamics, a world-leader in the development of advanced mobility robots, has also released a new video of its best-known quadruped BigDog quadruped, in which it is able to hold open doors for others. Originally funded by the U.S. military, the company was owned by Google parent Alphabet Inc. until the middle of last year when it was sold to Japanese conglomerate SoftBank Group Corp. for an undisclosed amount.