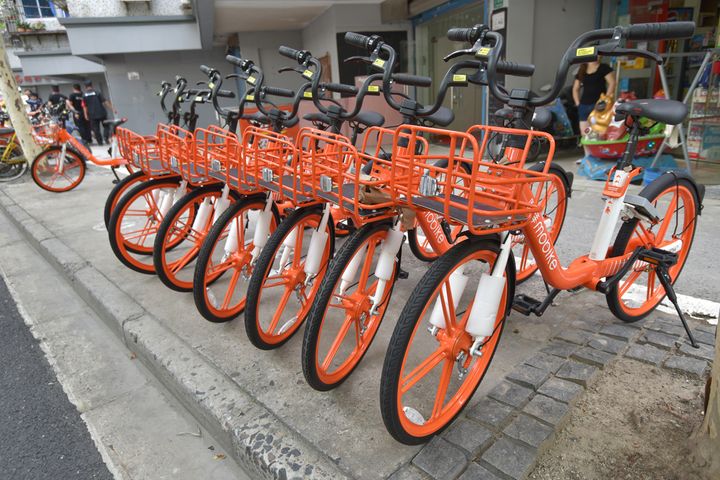 (Yicai Global) Sept. 6 -- Beijing Mobike Technology recently upgraded some of its no-parking zones in Shanghai, replacing them with electronically-fenced enclosures that automatically impose USD0.75 penalties for parking infractions in Shanghai.

This technical upgrade will stop users from locking bikes within no-parking areas. Those flouting the rule will have to pay a set 'bicycle management fee.'

Seven no-parking zones have been designated -- one near the National Convention and Exhibition Center -- in the first phase of the pilot program, state news outlet The Paper reported.

Users may station bikes in the no-parking zones once without paying any extra fee. From the second time onward, they become liable for the fine, which is deducted from their balance. If this subtraction pushes a user's account into the red, s/he will need to top it up before s/he can use the service again.

If, however, a customer unlocks a bicycle parked in a no-parking zone, but then moves it outside the electronic fence and locks it within two hours after paying the penalty, the system will automatically refund it and send a notification.

The company erected the e-fences in June based on no-parking areas police designated. These areas appear as gray blocks on the Mobike app. If a user parks and locks a bike in these areas, she will receive a text message from the system with a warning to move the bike to a recommended site marked with a 'P' on the map or other location where bicycles may park.

The frequency of parking offenses fell 30 percent on average in areas where the new e-fence system has been in place since its inception about two months ago.

Help may thus be riding to the rescue of China's urban centers, which have been overwhelmed in recent years by a multicolored flood wave of the popular rent-a-bikes, which now so clutter sidewalks as to often block them to pedestrian traffic.