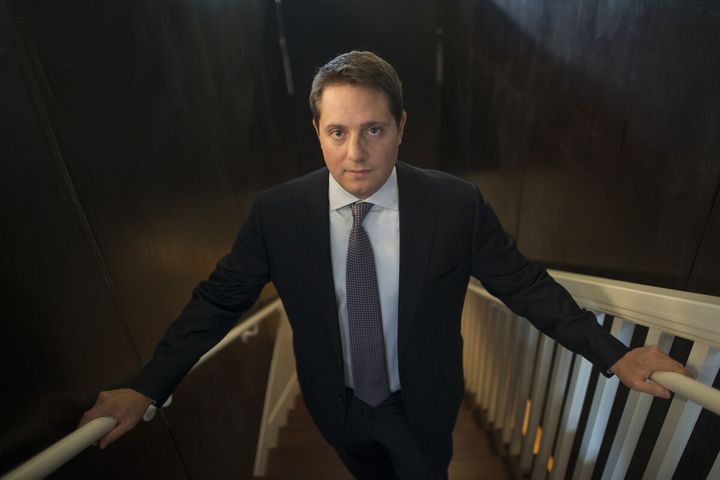 (Yicai Global) June 8 -- Mere mention of the famous US short-selling agency Muddy Waters Research, which has shorted China Concepts Stock several times, instills a deep sense of trepidation in many listed Chinese companies. Carson Block, Muddy Waters' founder, has always kept a low profile, and his story is not well-known.

Carson Block has been interested in stock research since childhood. His father, William Block, was a stockbroker on Wall Street and established WAB Capital in 1997 [Block hereafter refers to Carson]. WAB Capital focuses on studying medium and small-cap stocks in the US and other countries.

Block encountered setbacks before success. He started up enterprises that ended in failure. After changing jobs a few times, he established Muddy Waters Research.

He grew up in New Jersey and attended the University of Southern California, where he studied finance and Chinese, CNBC reported. Later, he received a law degree from the Chicago-Kent College of Law.

He worked at Jones Day's Shanghai Office in 2005. After working as a corporate lawyer for a while, he got tired of his job.

Block decided to start a business and ran a private warehouse called Love Box Self Storage in Shanghai where white-collar workers could store sundries in 2008.

The largest private warehouse was about nine square meters and its monthly rent was USD545 (CNY3,700), Carson Block said in a Shanghai TV interview in 2009. That kind of money could pay the rent of an apartment in the city center.

Even after writing Doing Business in China for Dummies, Block felt he his China career was unfinished. He said in an interview that he put himself at the mercy of others when doing business in China. As a result, he lost money and learned a lot of painful lessons. "All entrepreneurs go through an experience similar to mine," he said.

Block's career improved in 2010 when his father asked him to help investigate a Chinese firm as a potential investment destination. Block and his friends traveled to China and visited the company's headquarters.

Block found that the entire company was full of broken machines and rubbish. After his trip, he immediately wrote a report describing what he had seen. He encouraged investors to sell the company's stock, and he short sold shares.

The short-selling of stakes in the group, Orient Paper Inc. [NYSE:ONP], put Muddy Waters Research on the map.

After seeing the potential for profit, Block decided to target 'fake companies.' Questions arose. How does one discover these companies? What kind of people can successfully find them and skewer them one by one?

Block makes a good Chinese business investigator, a market participant told Yicai Global. He has lived in China for a long time, and his Mandarin is good. He's on his way to becoming a China hand. Muddy Waters' name was taken from an old proverb "fishing in muddy waters."

Block worked as lawyer in China, where he learned about the commercial and taxation departments and how to obtain information on listed companies' financials. He can handle tasks that might seem complicated to many foreign investors.

He is a mysterious character. Block said that he has received many threatening letters, so he rarely discloses his whereabouts, and never reveals Muddy Waters' specific business model. The interests of investigative firms oppose those of companies that cheat investors out of money, he said.

Block is strong-minded and somewhat eccentric. Former Muddy Waters employees believe he is arrogant, maverick and even irritable. He admitted that he had a self-discipline problem when he was young, and had a hard time controlling his temper.

Block doesn't hesitate when others doubt him or his methods. He continues his career in China, working to look through Chinese company to see their true value.

In the mature financial market, Muddy Waters has been called a malicious short seller. The company calls itself an active short seller, but it is also something more interesting -- a loud short seller.

Muddy Waters does not take a short position and wait passively. It conducts investigations and surveys on a group. Then, it establishes positions and issues reports filled with data and facts to persuade others that the targeted business is overvalued. Its reports are readily accessible, and available for download on its website.

Muddy Waters conducted investigations into Huishan over the course of several months. Investigators visited 35 farms and five production bases (one of them is still being constructed, while another two show no signs of being built). Muddy Waters employed unmanned aerial vehicles to observe Huishan locations, and consulted with three senior diary experts, including two with Chinese diary industry backgrounds. Investigators communicated with multiple traders from three provinces, including Huishan's alfalfa suppliers. Muddy Waters conducted extensive and in-depth due diligence.

"Even analysts at US investment banks don't carry out these kinds of investigations, let alone Chinese securities traders," said Situ Jie, a senior US stock trader.

In a previous interview with Yicai Global, Block said that although Muddy Waters had finished probing Huishan two years ago, he did not short sell the company right after the investigation because the timing wasn't right yet. He didn't say when the right time would be.

Nevertheless, short-selling is no easy task, and targets are unwilling to let go. For example, NQ Mobile claimed Muddy Waters' reports were false and filed a lawsuit against the company. Sino-Forest also spent USD50 million investigating the 2011 accusation made against it.

"You must have seen what Sino-Forest did," Carson Block said of the firm in an interview. "It spent USD50 million fighting back, making our work much more difficult. However, it proved we were right, so we kept our eye on further developments. We need to ask ourselves how we can change the market's perspective, but that could take months. We need to re-iterate the short-selling logic, find out where the problems lie and deal with them."

Block admitted it was difficult to convince investors that their opinions on particular stocks were wrong.

Last year, he said in an interview that there are fewer instances of fraud in China-related stocks, but there is a new trend among listed companies – distorting estimated market value through financial operations. More and more companies are manipulating balance sheets, which paint a picture far from reality.

Block has years of experience in analysis and is adept at sifting through the incomes and expenses of target companies. He also hires external accountants and researchers to assist with data analysis, and has carried out field work himself.

Is the focus turning toward Hong Kong?

As early as 2011, a market analyst forecast Carson Block would turn to focus on the Hong Kong market. Many of the stories about Hong Kong firms are exacerbated, the analyst told Yicai Global, adding that Muddy Waters will follow them closely.  In Hong Kong, some chairmen hold stakes as large as 75 percent, he added, leaving only 25 percent available on the market. That leaves only a small amount to be manipulated, he said.

As of March 31 this year, there were 939 stocks which the Hong Kong Stock Exchange allowed short-selling for, including Huishan Dairy, one of Muddy Waters' target firms.

Muddy Waters released reports on Huishan Dairy in December, said Wang Yunjun, chief analyst at KAB Strategy Ltd., but the firm's stock price hasn't changed much. As short-selling requires a lot of capital, organizations tend to exit if there is little change in the stock price several days after their report.

An interview with Block shortly after Huishan's stock price dived showed he himself, a master in short-selling, also seemed somewhat surprised. "Never has there been a company whose stock price could stay firm for so long after we released the report," he said, "then it just plummeted suddenly without any warning. It was the first such case I've ever seen."

"Tonight is a sleepless night for me, things are going to get interesting," he said the day that Huishan's stock dived and trading got suspended.

Regulators are currently looking into the prevention of malicious short selling. Hong Kong Exchanges and Clearing Ltd. revised the selection criteria for its short-selling list in July 2016. For stock whose market value is more than HKD3 billion, the proportion of its total volume to the market volume must have reached 60 percent over the past 12 months. For stock which has been listed less than 60 days, the market value of its publicly-held stock must have reached HKD20 billion or more for 20 consecutive trading days from the second day it was listed. Previously, the market value for companies listed less than 60 days was HKD10 billion.

This makes short-selling more difficult. Hong Kong's listing rules stipulate that 25 percent or more of the total amount of issued capital stock must be held by the public. So many of the companies which have been listed less than 60 days will be included in the short-selling list only when their market value exceeds HKD80 billion.

As listed companies become more cautious and regulation becomes stricter, whether or not Carson Block will continue to delve in Hong Kong's stock market and maintain his 100 percent record remains a question.