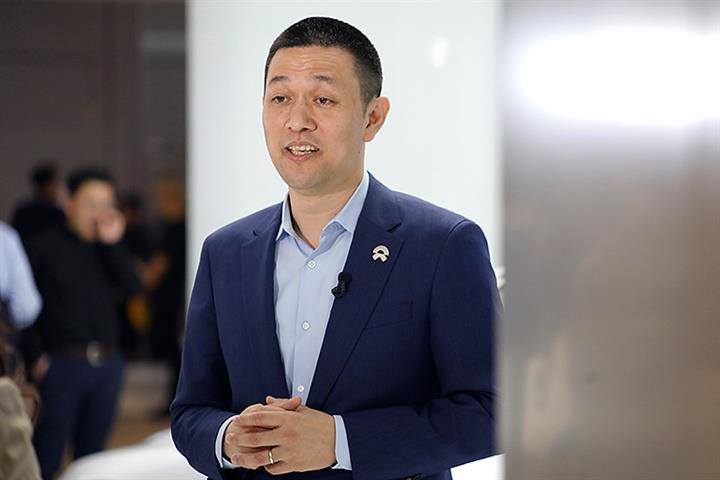 (Yicai Global) Aug. 24 -- Chinese electric car startup Nio’s first battery swap unit, which separates ownership of the vehicle from the battery, came into operation last week. However, customers need time to become acquainted with the new service, so it is not expected to boost sales in the short term, the firm’s chief executive officer said.

"I believe Battery as a Service will urge gasoline car users to choose Nio vehicles out of cars of the same price range in the long run,” Li Bin told Yicai Global on Aug. 20. “I am confident when I say this, but it won’t happen right now. It will take time for users to accept the service," he added.

Nio’s battery swap concept has been a long time in the making and it is currently the only new energy vehicle maker in China with battery swap technology. Consumers can buy the battery with the vehicle or, if they are concerned about battery life, they can choose to rent a battery.

Batteries can also be exchanged immediately, doing away with the lengthy charging times. Nio currently operates 143 battery replacements stations nationwide and had swapped batteries 800,000 times as of Aug. 20.

"Nearly 60 percent of our users have used the battery swap service, and half of them change batteries twice a month," he said.

It costs CNY1 million (USD144,586) to construct a battery swap station, almost 50 percent less than it first cost to build them. Nio intends to double the number of its stations within the next year. The Shanghai-based firm does not need to worry about the expense, it has enough financing, Li said.

China rolled out a series of subsidies and supportive policies early on that have helped it become the world’s largest NEV market. Sales, though, have been dropping since last year. The country sold 486,000 units between January and July, down 32.8 percent from a year earlier, according to the China Association of Automobile Manufacturers.

NEV sales in Europe, though, are on a rise as Germany, the Netherlands and other countries introduce subsidies for the green vehicles. Nio plans to enter Europe in the second half of next year and to expand its market even further in 2022 to 2024, Li said.

"We will evaluate where our products and services are most easily accepted and make flexible adjustments," he said.

Escalating China-US trade frictions, though, have been posing challenges to an increasing number of Chinese companies.

"We believe the Chinese and US governments are able to solve the current situation amicably,” he said. A company always has various possibilities and we believe Nio can tackle all challenges. We, however, certainly do not want to see politics affect the firm’s profitability," he added.