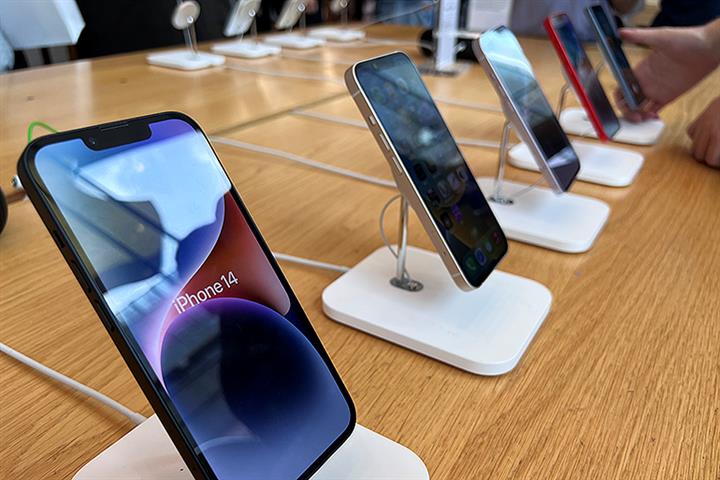 (Yicai Global) Sept. 20 -- The price of an iPhone 14, Apple’s latest smartphone series, has reportedly fallen by as much as CNY1,100 (USD157) in China in the days since the lineup was released because of slack demand.

The new iPhone is on sale for CNY100 to CNY900 (USD14 to USD128) less than its launch price on Sept. 16, International Financial News learned from an Apple dealer yesterday. Premiums on the iPhone 14 Pro and iPhone 14 Pro Max have also dived under CNY1,100 from between CNY1,500 and CNY4,000, according to the latest dealer prices.

During the presale period, supply of the Pro models fell short of demand, with deliveries delayed to next month. There were enough basic models, so buyers could pick them up at physical stores on the first day of sales, the report said, citing two official Apple retailers in Shanghai and Suzhou.

Presales of the iPhone 14 and iPhone 14 Plus were “worse” than that of the iPhone 13 series, indicating that Apple may already have failed to position these products in the market, Guo Mingqi, an Apple supply chain analyst, said in a post.

Sluggish sales of the iPhone 14 are in line with expectations, as the new series is not much different from the previous generation aesthetically, industry analysts noted, adding that it uses the A15 central processing unit, the same as the iPhone 13 series, instead of the newest A16.

Even the daughter of Steve Jobs, Apple’s founder, roasted the iPhone 14 on social media, implying that it is no different from the iPhone 13.

The iPhone 14 Pro models are much more popular than the basic versions. Visitors waiting in line at Apple stores mainly go for the Pro models, the only ones equipped with the Dynamic Island screen function.