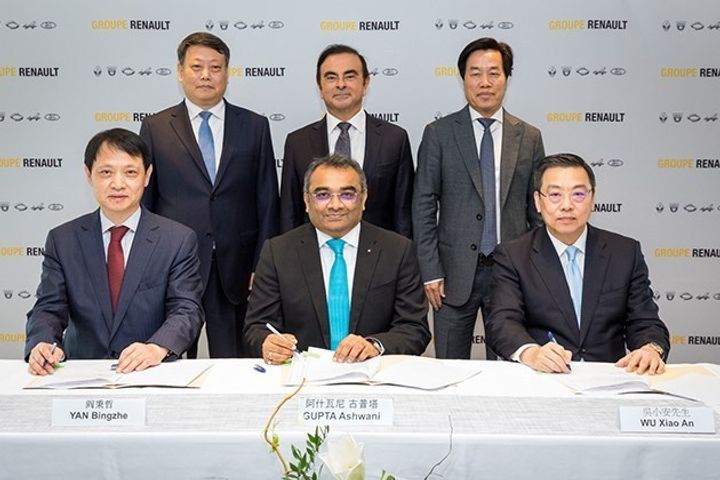 (Yicai Global) Oct. 18 -- French carmaker Renault has inked a deal with a Chinese partner to launch three electric light commercial vehicles within the next two years.

The pair will produce the van models at the plant of Brilliance affiliate Jinbei Automotive in northeastern Liaoning province after signing a deal with the local government at Renault's Paris base, news outlet NetEase reported. Renault and Brilliance first set up a JV to manufacture and sell LCVs last December.

The project between Brilliance and Renault is an important achievement for Liaoning as well as China's auto industry overall, Tang said, adding that capital Shenyang and Liaoning province are committed to supporting vehicle projects, new energy research and development, as well as the promotion of local supply chains and products.

Ten months on since setting up the JV, Renault-Brilliance has set up a local management team and drawn up a development plan for electric vans to boost growth, said Renault CEO Carlos Ghosn. The company plans to deliver seven LCVs for China including three electric LCV models, starting in early 2019.

Renault and Brilliance plan to manufacture and sell the LCVs under the Jinbei, Renault and Huasong brands with the goal of achieving 150,000 in annual sales by 2022, according to a deal signed at the end of last year.

Annual Chinese LCV sales are estimated at around three million units, while the country is the biggest and fastest-growing electric vehicle market worldwide. Liaoning province is one of China's new automobile industrial hubs with over 120 auto and auto part manufacturers setting up shop.

Qi Yumin, chairman of Brilliance China Automotive Holdings, said that the deal will help accelerate the introduction of new products and new models, as well as boost product research and development capabilities.