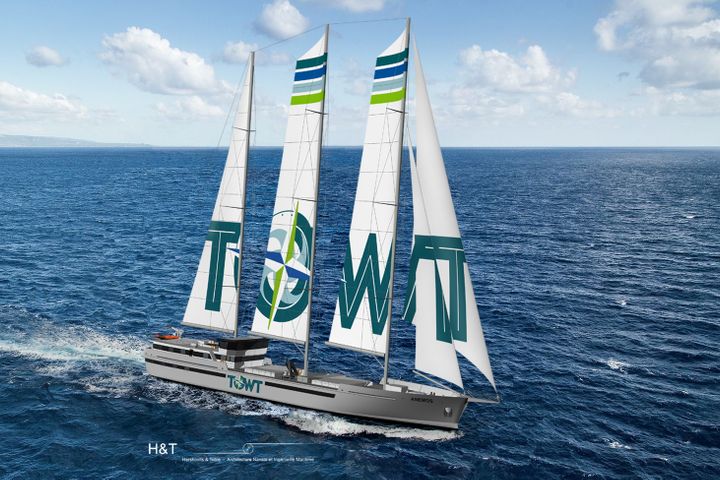 An increasing number of goods are transported by water, polluting both air and oceans. Several French companies are starting to use sailboats to tackle the situation, which is responsible for tens of thousands of premature deaths.

Ninety percent of the worldwide transportation of goods happens on the oceans. The maritime transport sector accounts for about three percent of total global greenhouse gas emissions, not to mention sulfur dioxide and fine particulate matter. According to a 2015 study conducted by the University of Rostock, maritime transport is responsible for 60,000 premature deaths in Europe. That figure could rise, as the sector's activity is expected to grow anywhere from 50 to 250 percent by 2050, according to the International Maritime Organization. Faced with this global predicament, stakeholders in France are aiming to revive sail freight shipping. This ecological solution is particularly effective because it reduces CO2 emissions by 90 percent.

"We charter existing ships capable of carrying 10,200 or 300 tonnes of goods," says Guillaume Le Grand, president of the Trans Oceanic Wind Transport (Towt) shipping company, specialized in sailing. Created in 2009, the company relies on a fleet of four old rigs, 20 to 40 meters in length, to reach England, Portugal, Scandinavia, or even cross the Atlantic.

To identify and promote goods transported by sail power, the group has created the label "Anemos," ancient Greek for "the wind." This logo is stamped onto products, which are also labeled with a tracking travel number. " We provide information on the product's route and carbon footprint, with complete transparency," says Le Grand. "We are offering complete traceability to consumers who can also see, for example, from which cooperative the cocoa beans have come."

Products such as chocolate bars, coffee, rum or tea are labeled, transported, then sold via Towt's online store or directly at its brick-and-mortar store, located in Douarnenez, Brittany. The startup also transports products for other customers, such as Portuguese wine, beer or olive oil for the organic grocery store chain Biocoop.

The idea seems to please restaurant owners, retailers and even some of France's largest companies. "We offer a concrete solution to companies that wish to reduce their carbon footprint and meet consumer expectations," says the founder. Last year, his company reached a turnover of 300,000 euros (USD 340,000).

"In 2016, we transported 120 tonnes of products, then 180 tonnes in 2017 and 220 tonnes last year," says Le Grand, adding that the company has saved 300 tonnes in greenhouse gas emissions so far. "It is still low, but we are the only ones enabling neutral figures in maritime transport," he notes. "We are doing our part."

Even if their activity is growing, it remains a drop in the ocean compared to the 10.5 billion tonnes of freight that traveled via more than 5,000 container ships last year. However, Le Grand believes that his concept has proven its worth and that the solution is economically viable. According to his estimations, sailing freight is only slightly more expensive than conventional transport. As a result, the products are a bit more expensive, too: "Roughly 10 cents more per bottle of wine, for example," he says.

The success of the model has encouraged him to aim even higher, and the company is now building a modern sailboat. The future three-masted ship, which is expected to set sail by late 2021, will measure 67 meters and be able to carry 1,000 tonnes of cargo at a cruising speed of 11 knots – a similar speed as cargo ships that pollute, and twice as fast as the old rigs now chartered by Towt. "Once in the water, the Cargo Sailboat will save more than 10,000 tonnes of CO2 per year and more than 300,000 tonnes over its lifetime," calculates Le Grand.

Towt is not the only group investing in sending cargo by sail. The French company Grain de Sail, which manufactures and markets chocolate and coffee, is building a ship that will sail twice a year across the Atlantic and bring back up to 35 tonnes of goods. The Nantes-based Neoline, which develops sailing and wind-powered cargo ships, goes even further. At the end of last year, the startup signed a three-year partnership with Renault to transport vehicles to the St. Pierre and Miquelon archipelago, south of the Canadian island of Newfoundland. The agreement entails the construction of two 136-meter-long roll-on/roll-off wind-powered cargo ships, able to cross the Atlantic and deliver freight under sail. This will help the car manufacturer achieve its goal of reducing its carbon footprint by 25 percent between 2010 and 2022.

The sailing cargo sector is likely to continue developing. In fact, last year, the International Maritime Organization announced the signing of an agreement to reduce CO2 emissions from shipping by "at least 50 percent" by 2050, compared to 2008 levels. Until the sector invents a new economic model, using wind power to reduce CO2 emissions as well as air and ocean pollution remains the most effective solution.