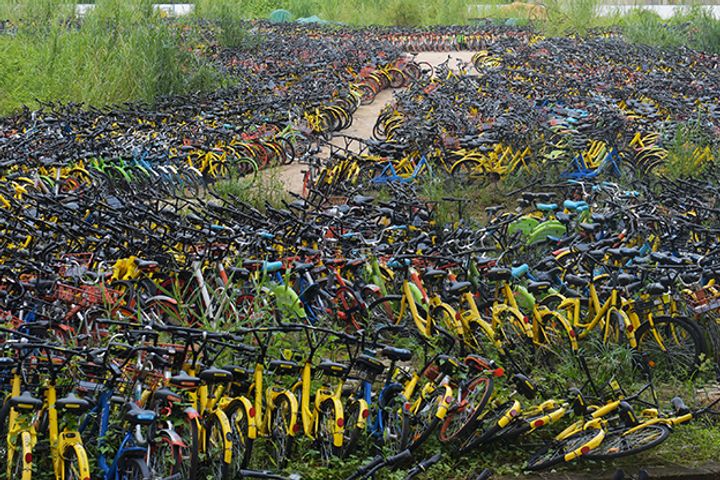 Around 770,000 active dockless bikes ply the roads of Shenzhen next to Hong Kong, with the majority deployed by China's two biggest operators -- Bikelock Technology, which runs Ofo, and Mobike Technology, the firm behind Mobike. Three brands account for most of the castoffs -- Coolqi, Xiaoming and Bluegogo -- all of which have ceased operating and folded, local media Shenzhen Evening News reported yesterday.

After deducting disposal charges, the salvage proceeds will go into the national treasury, city authorities said. Shenzhen is the first Chinese city to adopt this kind of disposal scheme.

Bike-sharing has undergone explosive growth in China in the past few years, with more than 30 firms in the business as of March, though several have since fallen by the way -- Bluegogo, Xiaoming and Coolqi among them -- Sina Finance reported. That's left junked bicycles piling up, quite literally in some cases.

A Shenzhen city official said they had been unable to contact Coolqi Beijing Technology. If the company does not claim or recycle its two-wheelers within a set period, the city plans to recycle them, and will enlist a company to do the job. Chinese ride-hailing giant Didi Chuxing Technology, which agreed to buy Bluegogo in January, is also clearing away such bikes.

Yueqi Information Technology, the Guangzhou-based operator of Xiaoming that has already declared bankruptcy, issued a statement saying it planned to retain China Recycling Development to recover and sell discarded bikes for re-use in cities where it operates to help discharge its debt. Each one will sell for CNY12 (USD1.50).