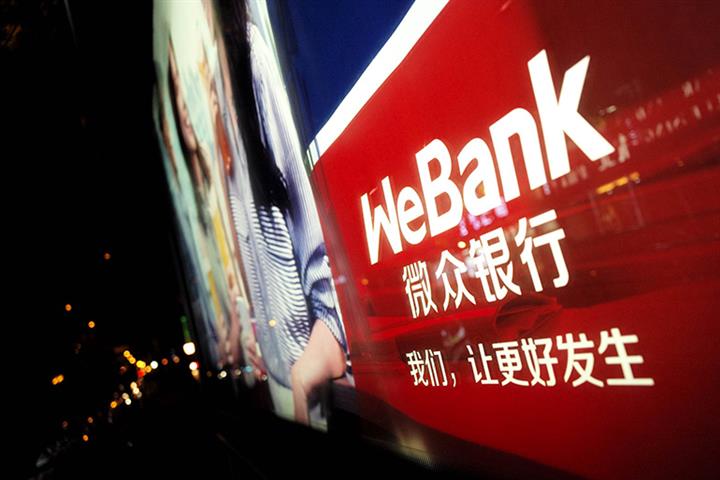 (Yicai Global) Dec. 3 -- WeBank, China’s first private and online-only lender, has offered to extend all its outstanding loans to tenants affected by the early termination of some rental contracts on struggling long-term apartment rental platform Danke Apartment for three years without the need to repay the principal or interest.

WeBank will grant an interest-free extension of outstanding loans to all clients involved in the ‘Danke incident’ and will not ask for repayment of the principal until 2023, the bank, which is backed by internet giant Tencent Holdings, said yesterday. Clients should apply for the extension on the bank’s website and their credit records will not be affected. New plans to protect clients’ rights and interests will be drawn up should Danke fail to turn itself round by the deadline, it added.

The ‘Danke incident’ concerns a number of tenants being turfed out of their lodgings as landlords, fearing that bankruptcy looms at the online realtor, have asked to terminate their contracts early. Yet the tenants are still under a contractual obligation to pay their rent monthly.

Shenzhen-based WeBank, which had extended 161,845 loans to tenants of Danke as of Dec. 1, has not effectively managed the risks in the ‘rental loan’ model and as such has harmed tenants’ interests, according to public opinion.

Lodgers can apply for a bank loan worth a whole year’s rent on signing a long-term apartment lease with realtors such as Danke. The bank will pay the funds to the realtor, who will then reimburse the landlords and the tenant repays the bank in monthly installments.

This operating model allowed companies like Danke to not only take a large cut from the actual rent charged, but to also collect a huge amount in prepayments to fund rapid expansion. However, it can become very risky when there are not enough new renters to keep up its capital flow.

The Beijing-based firm has been growing at a rapid rate, with a 46.8 percent jump year on year in its portfolio to 419,000 apartments this year, and so have its debts. It racked up losses of CNY3.43 billion (USD522.6 million) with a debt-to-asset ratio of 95.78 percent in 2019. Last month operator Phoenix Tree Holdings was not even able to pay its staff wages.

WeBank is a commercial bank and has no obligation to exempt loans, the bank said. It raked in CNY4 billion (USD609.8 million) in net profit last year on revenue of CNY14.9 billion. It has total assets of CNY291.2 billion (USD44.4 billion).