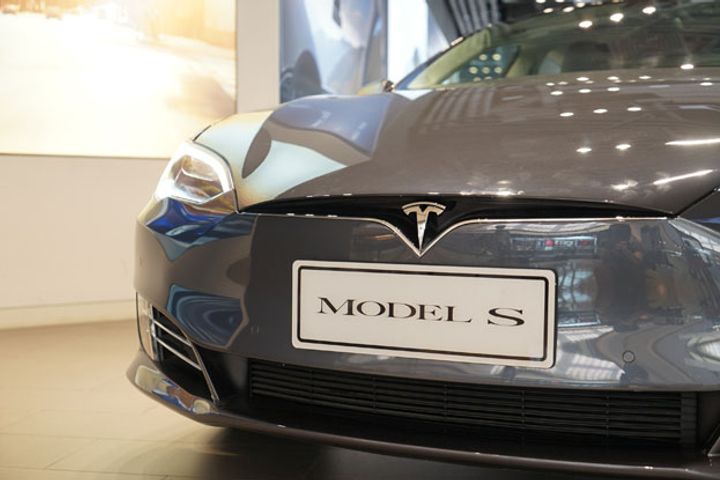 (Yicai Global) Dec. 13 -- Tesla sales in China fell 70 percent annually in October, latest sales data from a trade group show, after the company raised prices twice in July and August in response to tariffs. The company sharply cut prices at the end of last month, which sent its mainstream car models to their lowest price levels in three years.

China raised tariff on vehicles from the US from 15 to 40 percent from July 6, resulting in an overall jump in Tesla car prices. The Model S 75D, with the smallest price mark up, rose by CNY139,300 (USD202,73) to CNY849,900; the Model X P100D with the largest price jump went up by CNY255,600 to CNY1.6 million (USD232,853).
The company instituted a second slight price rise in mid-August, per the latest data from China's National Passenger Vehicle Market Information Association.

Tesla's sales in China fell by 37 percent annually in the third quarter. It sold only 211 cars in China in October, a sharp annual down of 70 percent. Among all the car types it sold in China, its main Model S sold only 50 units, down 82 percent; its other pillar, the Model X, sold only 161 units, down 62 percent.

The company said that the claim of its 70-percent sales drop in China in October is inaccurate, and it does not disclose regional and monthly sales data.

Tesla does indeed not reveal its sales data, Cui Dongshu, secretary-general of the NPVMIA, confirmed to Yicai Global, and said the body's figures were based on external data.

Tesla's sales in China will stop dropping next year, Cui believes, and tariffs are key to arresting the decline and even staging a rebound short term.

China imported 13,970 pure electric vehicles from January to October, down 7 percent annually, and the fall in October was 61 percent, customs data shows.

Tesla announced price cuts in China at the end of November amid a softening auto market. It trimmed the stickers for the Model3 long-life battery dual-motor all-wheel-drive version and the high-performance all-wheel-drive version by CNY40,000 and CNY100,000, respectively, and that of the Model S 75D by about 12 percent. The Model S 100D is CNY954,600, a cut of about 12 percent, while that of the Model S P100D is 1.1 million in a drop of around 26 percent.

The average price of Tesla's top-selling car models in China is the lowest in three years, and buyers can enjoy subsidized interest payments if they purchase cars on credit, a saleswoman at a Shanghai car dealership surnamed Yang told Yicai Global.

Government officials inspected the construction of Tesla's super-factory in Shanghai's Lingang Area last week, Yicai Global learned from the area's administration. The land leveling has been basically completed and groundbreaking is now set to start. The facility is expected to begin partial operations in the second half of next year.

Tesla's short-term price increases are closely linked to tariff changes, while the long-term price decline ties in with the process of its localization, said Ye Liang, an Ernst & Young partner and auto industry analyst.

If the localized Tesla Model3 can be delivered in large quantities in China, Tesla's costs will be greatly reduced, and this will enable it to cut prices.