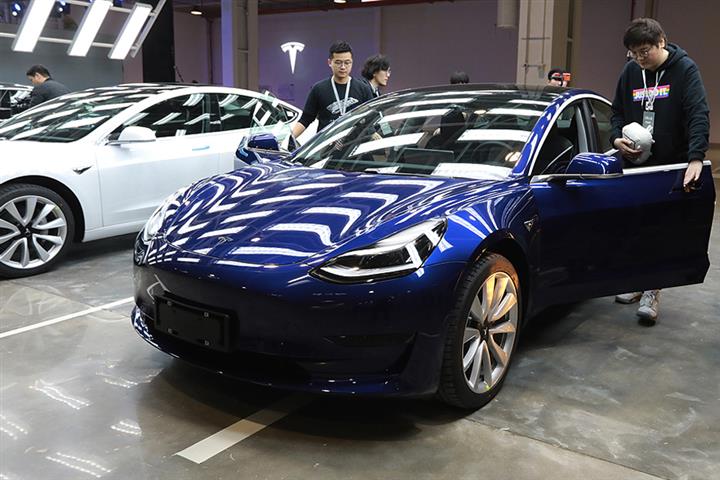 (Yicai Global) April 24 -- US electric car giant Tesla increased the starting price of its Model 3 in China after the government announced an end to subsidies for new energy passenger vehicles priced at over CNY300,000 (USD42,379).

Detailed new regulations on new energy vehicle subsidies came into force yesterday, the day the government released them.To avoid a situation where state aid goes on luxury consumption, eligible vehicles must not cost more than CNY300,000, it said, putting no restrictions on those with swappable batteries.

Vehicles made by Tesla and Chinese electric carmaker Lixiang Automotive will no longer get subsidies based on the regulations. But the ES6 and ES8 models of auto startup Nio, which sell for more than CNY300,000, will because they use swappable batteries. Those of BYD, Xpeng Motors, Beijing Automotive Group and Roewe are also eligible.

Lixiang Auto Chief Executive Li Xiang and Xpeng Motors founder He Xiaopeng both predicted via their personal social media accounts that Tesla will cut its NEV prices to qualify for the subsidies.

Tesla will lower the price of its China-made long range Model 3 to achieve a subsidized price of CNY277,500. That will pressure carmakers that sell vehicles for between CNY150,000 and CNY400,000, forcing price cuts, He forecast, adding that this would be good for buyers and for market growth.

China’s NEV sales have slowed over the past two years after years of rapid growth. NEV sales dropped 56.4 percent in the first quarter from a year earlier amid the Covid-19 outbreak.

Tesla can afford to raise prices because of good sales performance. The company sold more than 10,000 vehicles in China last month, eight times the figure for Nio and 3.5 times that of Nio, WM Motor Technology and Xpeng Motors combined.