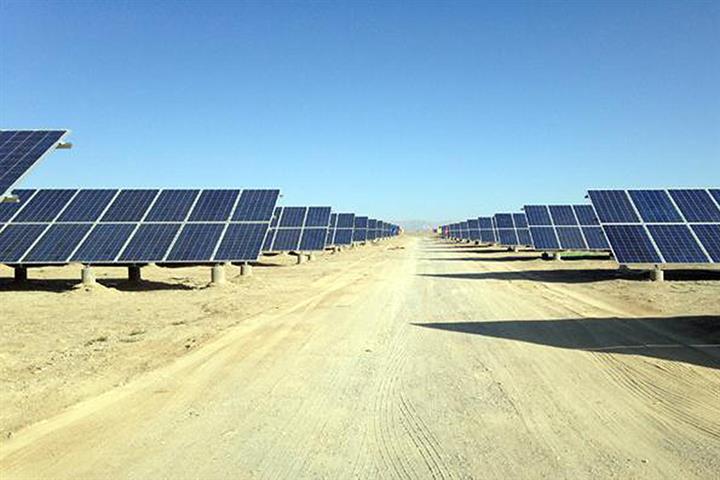 (Yicai Global) June 20 -- Shares in Trina Solar surged as much as 8.4 percent today after the Chinese solar panel manufacturer said it will build an industrial park in northwestern China that will house the full gamut of industries in the photovoltaic industrial chain to help stabilize the cost of raw materials, boost its annual capacity and make its new-generation batteries more competitive.

The industrial park, to be located in Xining in northwestern Qinghai province, will produce everything from industrial silicon, high-purity polysilicon, monocrystalline silicon, silicon wafers, batteries to auxiliary materials, the world’s second-largest solar panel supplier said June 17. It will include a silicon plant with an annual capacity of 300,000 tons and a solar panel factory with a yearly output of 10 gigawatts.

Although investment amounts were not given, Trina Solar said the park will cost more than its available capital. The Changzhou, eastern Jiangsu province-based firm had cash and cash equivalents of CNY6.5 billion (USD974 million) as of the end of last year, according to its latest annual report. Construction will start before the end of this year and should finish in 2025. Around half of the designed capacity will come into production next year.

The rising cost of raw materials has been squeezing the margins of solar panel makers, despite rapid growth in the sector. The industrial park, which puts a strong emphasis on the production of raw materials, will help stabilize the firm’s PV module manufacturing costs. It will also improve the company’s footprint in all areas of the industrial chain, it said.

Trina Solar intends to hike production of solar modules by 42 percent this year from 2021 to 43 GW, according to the financial report. Last year profit surged 46.7 percent to CNY1.8 billion (USD269.6 million) and revenue soared 51.2 percent to CNY44.4 billion (USD6.6 billion).