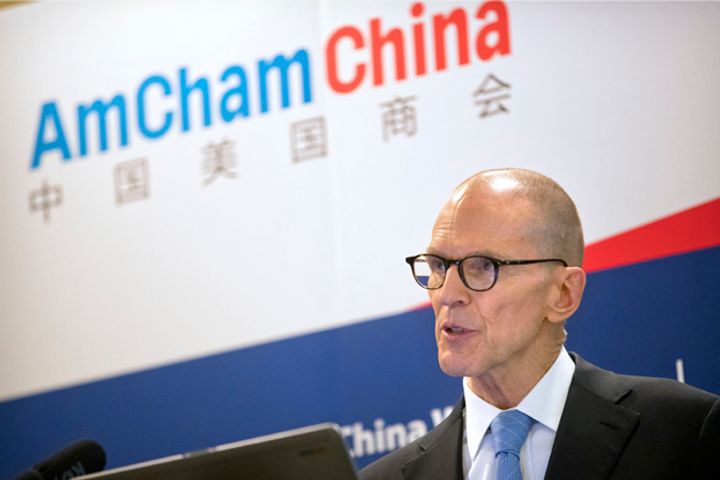 Trump Tariffs May Punish Three-Quarters of US Firms in China, AmCham Says

(Yicai Global) Sept. 20 -- Import tariffs imposed by US President Donald Trump on Chinese products may affect some three-quarters of US companies that operate in the country, according to the head of the local American Chamber of Commerce.

AmCham China members are not in favor of the tariffs, Chairman William Zarith said a day before the US government's formal announcement of a new round of taxes on Chinese imports. Zarith was speaking at a special forum session in Beijing organized by the State Council Development Research Center on Sept. 16, when he released the results of a recent survey of US firms.

Jointly undertaken by AmCham China and AmCham Shanghai, the survey's results indicate that 60 percent of firms are seeing a negative impact on business following the roll-out of an initial USD50 billion in tariffs by both countries in June. An extra USD200 billion in tariffs from Washington and USD60 billion from Beijing could result in the percentage increasing to 75 percent.

Zarith called on the Trump administration to create an environment for fair competition and build an economic relationship based on fairness and equality.

The US will slap a 10 percent tariff on USD200 billion of Chinese goods exported to the US from Sept. 24, and could raise the rate to 25 percent by next January, Trump said on Sept. 17.

The tariffs mostly impact US companies in China because of their supply and value chains, Zhou Shijian, a senior researcher for Tsinghua Center for US-China Relations, told Yicai Global.

Businesses under the American Apparel & Footwear Association have been greatly hit by the levies. Trump's decision to impose them demonstrates his indifference to enterprises, workers and US families, AAFA President Rick Helfenbein said.

Manufacturers and their workers will be more severely affected if China and the US cannot reach an agreement on trade and no one would win a trade conflict, according to Jay Timmons, the president and chief executive of the National Association of Manufacturers.

The US relies heavily on chemical imports from China, said Cal Dooley, president and chief executive officer of American Chemistry Council. Representatives from the sector urgently demanded that the US Trade Representative pays attention to supply chain issues.

Tariffs are unacceptable for chemicals on a global scale, Dooley said, adding that firms in the industry would find it difficult to innovate due to their introduction.