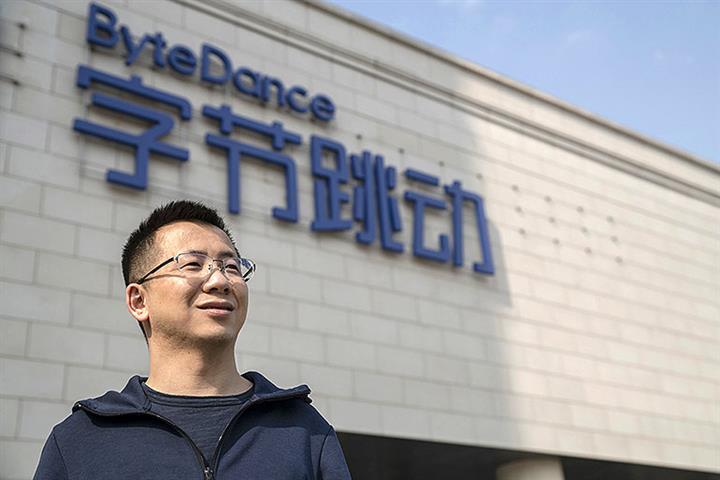 US Wants to ‘Ban TikTok and More,’ Founder Is Reported as Saying

(Yicai Global) Aug. 4 -- The founder of ByteDance Technology, the Chinese tech unicorn that owns TikTok, reportedly said the US government does not really want it to sell the popular video-sharing app’s US business.

“What the US really wants is to ban TikTok and more,” Zhang Yiming said in his second e-mail of the week to employees, according to a report today by tech media 36Kr.

The issue is not about the Committee on Foreign Investment in the United States concluding that TikTok is a threat to national security and that it must divest its US operations, said Zhang, who is also chief executive officer. The true aim is to enforce a total embargo, he said.

US President Donald Trump announced at a White House press briefing yesterday that ByteDance should find an American buyer for TikTok’s US operations by Sept. 15 or face a ban. The Beijing-based company is in talks with Microsoft over a sale. The US tech giant said two days ago that it expects to wrap up negotiations by the deadline.

“Forcing TikTok to sell its US business is not reasonable, but it is part of legal procedure,” Zhang said in his emailed letter. “As an enterprise, we will abide by the law.

“But this is not what the US wants,” he said. “It doesn’t want to see this happen.”

US pressure on the trendy video app operator for alleged threats to the country’s national security has put TikTok under great strain since the beginning of the year. That culminated with Trump announcing on July 31 that, “As far as TikTok is concerned, we’re banning them from the United States.”

ByteDance has more than 60,000 employees worldwide and adheres to a vision of being a trusted and truly global company. Because of its international character, cultural conflicts are inevitable, Zhang told staff.

“We respect other countries’ cultures, and that’s why we’ve attracted talent in different countries to join us,” he said. “We’ve built a good image as an employer in many countries after two to three years of ups and downs.”

In the last two years and particularly recently, some politicians in the US and other countries have been criticizing China and Chinese companies, giving rise to anti-China sentiment, Zhang said. People with a broader perspective have been unable to voice their views. The firm must appreciate the situation that its non-Chinese employees are in and be prepared for more difficulties in the future, he added.

The company must tackle existing challenges with a view to long-term development, Zhang said.

“We must make unremitted efforts to provide customers with excellent products and form a wonderful corporate philosophy,” he said. “We must be open and transparent. We must pursue high standards in protecting users’ rights and interests and take corporate social responsibility. I believe all these can help us win users and give credit to all Chinese firms.”