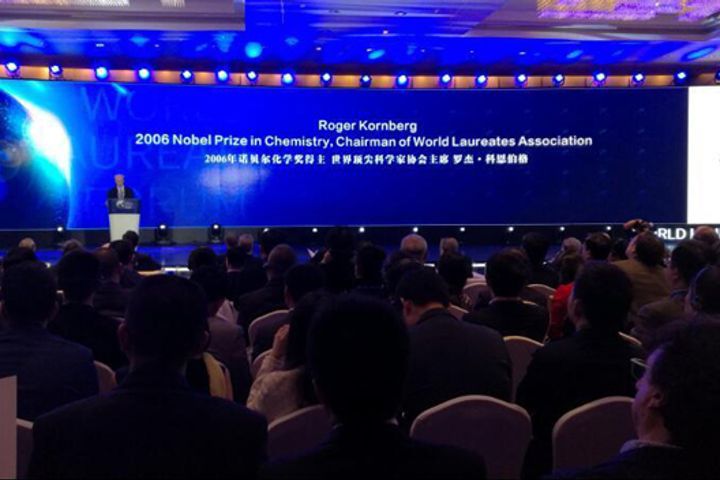 (Yicai Global) Oct. 29 -- A forum attended by 37 top scientists from around the world including 26 Nobel laureates is taking place in Shanghai. It is the first such large-scale gathering of top scientists from different areas in China and is also a global rarity.

The three-day World Laureates Forum hosted by Shanghai authorities is due to run in the city from today.

In addition to Nobel laureates, winners of other prestigious academic awards such as the Wolf Prize, Lasker Award, Turing Award and MacArthur Fellowship whose research areas encompass chemistry, physics, medicine and computer science, are also among scientists attending the event.

They will discuss the construction of a science and innovation center with global impact and jointly promote scientific and technological innovation together with 17 academicians of the Chinese Academy of Sciences and 18 young scientists.

This is the first such large-scale science and technology banquet held in Shanghai. Its most important goal is to build a community of top scientists from different fields and let them get to know each other, Michael Levitt, vice chairman of the World Laureates Association and also one of the forum's founders, explained to Yicai Global.

With growing demand for transnational interaction among scientists, they want to explore the possibility of working with the Chinese government, research institutions, universities and businesses, Levitt said.

He is also one of the initiators of the Global Nobel Prize Scientists Association, which aims to build a platform to popularize scientific achievements, laboratories, startups and incubators. Dozens of Nobel laureates and academicians from multiple countries have joined the organization since its foundation, and it is expected that hundreds of Nobel Prize winners will join over the next several years.

The forum will provide a strong external environment for stimulating innovative impetus and encouraging innovation-driven research, Prof. William Moerner of Stanford University in the US, told Yicai Global.

"Scholars attending the forum represent the frontier of human science and technology and shoulder the important mission of leading the progress of international academic exchanges and the training of innovative talents," said Lin Zhongqin, president of Shanghai Jiao Tong University and an academician with the Chinese Academy of Engineering taking part in the forum.

An honorary professor at Shanghai's Fudan University, Levitt said that colleges like it and Jiao Tong should be built into ones with rich connotations like Stanford and Harvard.

The forum will split into four themed panels, a special sub-panel and a round table under the overarching theme of 'Science and Technology for the Common Destiny of Mankind.' Participants will brainstorm topics like photonic science and industry, life science and industry, innovative drug development and transitional medicine, and brain science and artificial intelligence.