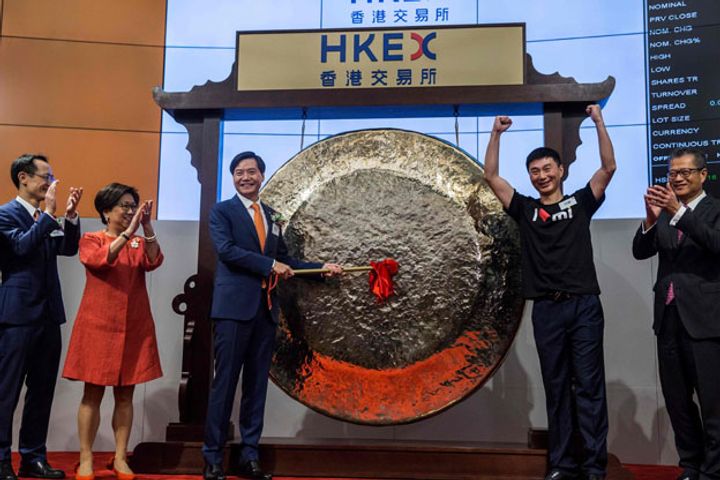 (Yicai Global) July 9 -- Xiaomi's closed below their offer price after the  Chinese smartphone giant began trading in Hong Kong today. Founder Lei Jun pointed to the depressed stock market for an explanation of the lackluster debut.

Xiaomi [HK:1810] closed 1.2 percent lower at HKD16.80 (USD2.14) a share, after falling more than 5.5 percent in intraday trading. The Beijing-based company had priced the shares in its initial public offering at HKD17. The benchmark Hang Seng Index climbed 1.3 percent.

The Hong Kong market as a whole is not performing very well today, Lei said, but the current share price is far better than our expectations. He believes Xiaomi's performance will improve in the long run.

More than 100,000 investors, including Hong Kong billionaire Li Ka-shing, Alibaba founder Jack Ma, and Tencent co-founder Pony Ma, invested huge sums of money to support Xiaomi, Lei said, extending his thanks to them despite the "general downturn" in global stock markets. Amid trade tensions between China and the US, Chinese equities slumped in June after peaking in January.

"We strive for a higher aim than just the listing plan," Lei told employees in an open letter published yesterday. "We are initiating the IPO for a better future."

Founded in April 2010, Xiaomi has grown into one of the world's biggest makers of smartphones under Lei, who is also chief executive, and has expanded into gadgets and internet-connected home appliances such as televisions.

After deducting fees and expenses, the company said it raised about HKD24 billion (USD3.06 billion) in its public offering, which was about a third of what it had earlier targeted. The IPO is the world's second largest so far this year after Siemens Healthineers' Frankfurt listing brought in USD5.17 billion in March.

Two weeks ago, Xiaomi decided to delay a proposed issue of China depositary receipts, which may also have affected its Hong Kong listing performance. Xiaomi had been expected to become the first to take advantage of the CDR pilot scheme, which allows non-mainland-listed companies and firms with dual-class share structures to issue mainland A-shares.

Today, Lei said that after several rounds of talks with the China Securities Regulatory Commission, the company and the regulator had reached a consensus to put the CDR issuance on hold. Xiaomi plans to issue CDRs after its H-shares reach an appropriate level, he added.