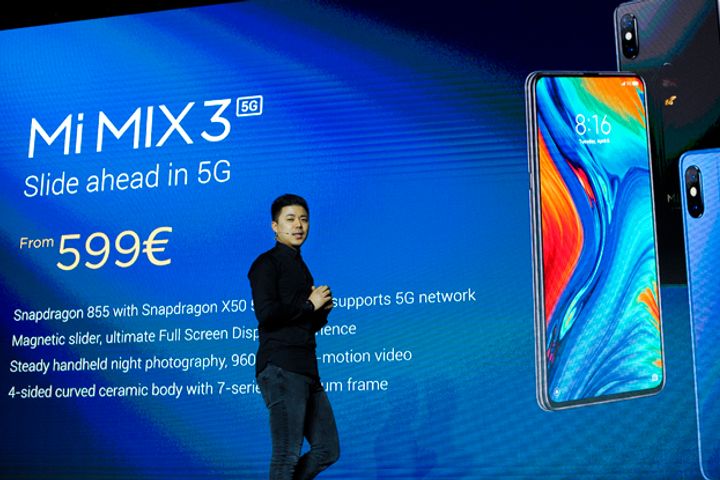 Xiaomi has priced the MIX3 at EUR599 (USD 680) and will have more than seven initial foreign carriers for the handset, the company said without disclosing the timetable for mass production in China.

"Xiaomi was founded only eight years ago. We haven't had any chance to lead the trend in 3G or 4G. Now that 5G has given us the chance, we hope to lead the sector this time around," Wang Xiang, Xiaomi senior vice president and head of its international business told Yicai Global yesterday.

The new technology relates to development of all industrial chains. This is the first time in human history for all non-in-person communications to flow through a single technology system, which will encompass voice, high- and low-speed data, and Internet of Things. The sector thus needs time to study what services consumers really need, as 4G and 5G will coexist for a long time, Wang said.

"5G needs some time to extend across the world, but this year must be the first for 5G application, since the technology has grown mature. European, US and Chinese carriers all hope to speed up their 5G deployment," Wang stated.

According to the work plans of China's Ministry of Industry and Information Technology and China's national team promoting the new technology and the 5G commercial plans of the three major carriers, China started the second phase of its testing of the new network in 2017 and conducted large-scale setup trials last year. The country started to build its 5G network this year based on previous work and will put it into commercial use as early as 2020.

Smartphones running the new technology will gradually become popular and set off a handset trade-in trend, while 5G tech application and its commercial use in cellphones have become recurrent topics at the MWC.

The company has entered over 80 countries and regions. It ranks first in India and second in Indonesia, and with its focus on Europe last year, now places fourth there, Xiaomi founder Lei Jun said at the Xiaomi 9's press release on Feb. 20. The firm will focus on leading the European market this year, so it will put the US on the back burner for the moment, he added.

Xiaomi made its first foray into Spain in November 2017, Wang said. The firm

finished first in the country's open market -- excluding Spanish domestic carriers -- and among the top three in the entire channel in the fourth quarter. The top two were South Korea's Samsung Electronics and China's Huawei Electronics, per third-party market researcher Canalys.

The European and US signal frequencies and demands are different, and the firm will release ever more products with local differences, Wang stated.

The company took in over USD15 billion from overseas in seven years. Its foreign-derived-revenue more than doubled annually to CNY22.3 billion (USD3.33 billion) to make up 44 percent of total income, hitting a record high, per the company's third-quarter financial report. "Overseas income will soon exceed domestic revenue," Wang said.

Intellectual property is a big part of Xiaomi's business model, Wang noted in referencing the patent issues facing Chinese handset makers going abroad. A smartphone may have tens of thousands of patented technologies in it. Today, no company or a person can design and make cellphones independently. The key is balance, he explained.

The firm already holds tens of thousands of patents, and applies for thousands more each year, he said. It has penned cross-licensing deals with Nokia, Qualcomm, Microsoft, and many other technology companies to obtain a reasonable price for its technology, Wang added. "The key is that the cost must be reasonable, and the business model must be sustainable long-term."

The German firm is a non-practicing entity that does not produce its own inventions, commonly known as a patent troll, Li Junhui, a professor at China University of Political Science and Law, told Yicai Global, explaining it sues large companies in the hope of gaining a share of royalties or a settlement.