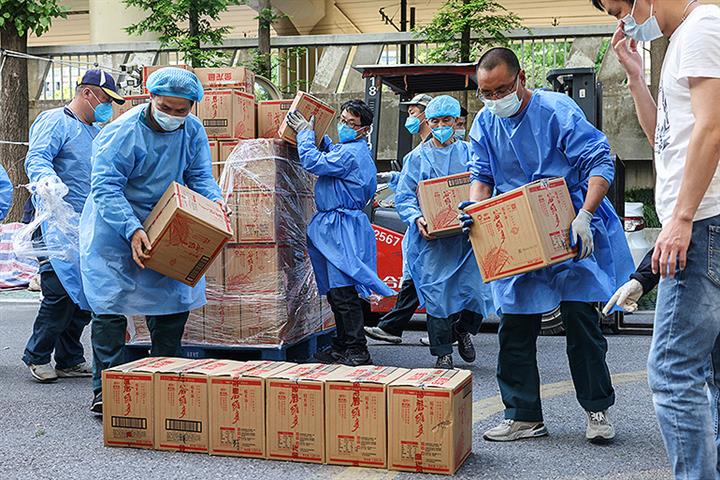 (Yicai Global) May 9 -- Confidence in China’s economic performance is at its weakest since April 2020, weighed down by the resurgence of Covid-19 in the country and greater uncertainty in the external environment, according to chief economists polled by Yicai Global.

The Yicai Chief Economists Confidence Index dropped to 47.6 this month from 47.8 in April, remaining in negative territory for the second month in a row, according to a survey of 19 leading economists in China. The figure was 47.8 in April 2020.

Covid-19 restrictions in parts of China, including citywide lockdowns in some cases, have brought increased downward pressure to bear on the world’s second-largest economy along with the Russia-Ukraine conflict.

Policy support to stabilize growth will continue to be enhanced, as the Politburo focused on the goals of economic growth and jobs at its April 19 meeting, said Ding Anhua, chief economist at China Merchants Bank. Infrastructure, real estate, and the platform economy will be the crux of measures to boost consumption, Ding added.

The economists predicted that the consumer price index and the producer price index are likely to have risen in April by 1.85 percent and 7.6 percent from a year earlier.

China is likely to have issued CNY1.56 trillion (USD232.8 billion) of new loans and CNY2.2 billion of total financing in April, according to the economists. They expect M2, a broad measure of money supply that includes cash in circulation and all deposits, to have increased by an average of 9.9 percent in the month.

Investment, consumption, and foreign trade will be below the levels of the past three months, with retail sales of consumer goods in April likely to have contracted by an average of 5 percent from a year earlier, the economists predicted. Consumption remained a weak spot of the economic recovery, impacted by Covid-19, employment and people’s incomes, said Liang Zhonghua, chief macro analyst at Haitong Securities.

China's export rose 3.9 percent last month from a year earlier, the slowest pace since June 2020 and down from 14.7 percent growth in March, figures released by the General Administration of Customs showed today. The surveyed economists surveyed had predicted a 3.7 percent increase. Imports were unchanged, after dipping 0.1 percent in March, versus a predicted 2 percent drop.

Industrial added value is likely to have risen about 0.9 percent in April, versus a year-on-year gain of 5 percent a month before, according to the economists. Stoppages at some industrial and commercial businesses amid the Covid-19 outbreak are bad for economic growth on the production end, noted Zheng Houcheng, director at Yingda Securities.

The economists forecast only a small possibility of a large depreciation of the Chinese yuan against the US dollar. They expect an exchange rate of about 6.66 this month, with the year-end forecast down to 6.46 from the 6.67 predicted at the end of April.