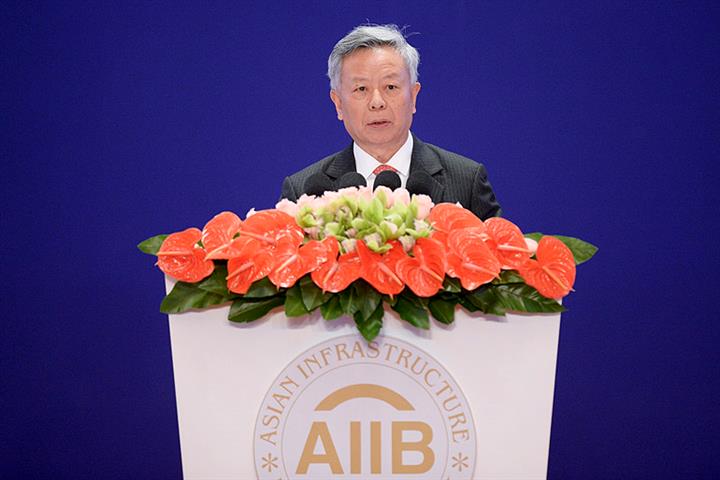 (Yicai Global) July 30 -- Wariness is needed towards the tide of counter-multilateralism, but excessive nervousness is unnecessary, Jin Liqun, the re-elected president of the Asian Infrastructure Investment Bank, said in an interview with Yicai Global amid the increasing pressure on multilateralism since the Covid-19 outbreak. The AIIB took unconventional measures to adjust its businesses in the special era of the pandemic, but will re-normalize its operations when the pestilence comes under control.

The AIIB will revert to its conventional business and will not issue policy-based loans after the pandemic is in check, Jin said. The bank will extend its business into health care, but ensure its proper ratio, he added. The AIIB's areas of focus will remain transport, energy, water supply and urban development.

Covid-19 may delay AIIB's plan to mobilize private capital, Jin noted. The bank aims for sovereign and private funds to provide half of its capital, but fulfilling this target is now beset by temporary difficulties as many infrastructure projects have ground to a halt amid the coronavirus.

The pandemic's impact is indeed present, but responding as quickly as possible with the available tools is key, he said. After the outbreak, the AIIB may need to double its efforts to make up for lost time, he continued. The bank should expend great energies to mobilize private capital.

The AIIB's biggest current challenge is to contain Covid-19, Jin said. Its management thus swiftly adjusted its businesses and resorted to unconventional measures.

For example, it approved a CNY2.5 billion (USD357.3 million) emergency loan program to help Beijing and Chongqing enhance their ability to respond to the outbreak and construct sustainable public health infrastructure. The AIIB's Chinese staffers executed and advanced this program, according to Jin. The bank launched a Covid-19 crisis recovery fund with an initial size of USD5 billion in early April. This reserve now has USD13 billion after several rounds of capital expansion.

Both multilateralism and globalization are eroding, Jin pointed out. This is because the global economy and multilateralism cannot solve all the problems that inevitably arise in the course of development.

Due regard for such a trend is warranted, but excessive skittishness is not, Jin said. Working hard to resolve problems in early-stage development as soon as possible is the reason why the AIIB was founded. As long as the bank continues to run well the world will see the true value and role of multilateral development institutions.

To solve problems in development, AIIB is not considering offering ‘soft loans’ on favorable terms that allow borrowers to repay foreign currency loans in local currency from day one, Jin said. These loans are common with the World Bank and Asian Development Bank.

Multilateral financial institutions that extend these ‘soft loans’ spend more on poverty alleviation and correspondingly allocate fewer funds to infrastructure, so the AIIB opted to focus its resources on this and other productive areas, Jin explained.

The AIIB is financially ready to provide loans in 13 local currencies, including those of India, Indonesia and Thailand that have made corresponding requests, Jin noted. The AIIB successfully issued its first CNY3 billion ‘panda bond’ for pandemic prevention and control on China's inter-bank bond market in June, he said.

The bank is designed to meet the needs of individual members, but does not specifically pander to the interests of any one country, Jin said in reply to a question of whether the bank will help promote yuan internationalization. The AIIB should promote whatever is good for the entire bank and multiple countries, he added.