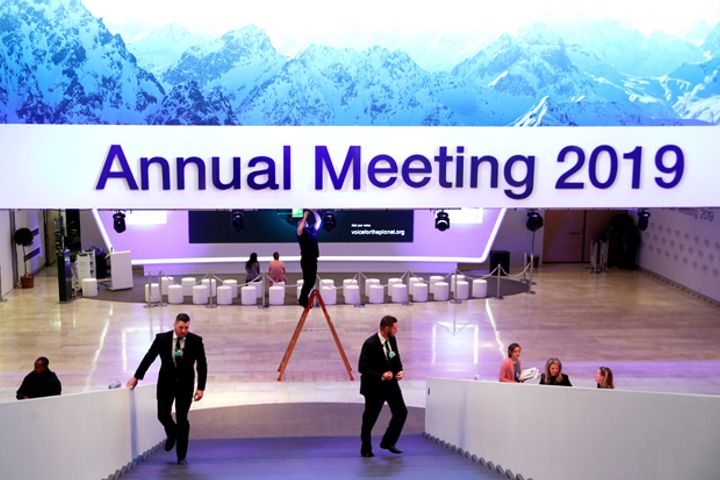 Bliss suffused markets during the forum's annual meeting held early last year at a rare simultaneous global economic expansion, when no inklings of the tumultuous market fluctuations and economic slowdown that would strike in the second half yet glimmered.

The world will face even more challenges this year.

Guests and attendees at this year's more subdued event are fixated on China's economy as much as the stalling global one, even as they mull their future responses.

The progress of China's financial opening-up progress is therefore exercising an irresistible allure on overseas markets.

The synchronous global economic expansion is now a thing of the past, so how to deal with more uncertainties and downward risks in the economy has become a front burner issue at this year's forum.

Exacerbating this trade insecurity, the contracting financing environment and the risk of a 'no deal Brexit' for the UK may induce a downturn in the global economy, the International Monetary Fund said in the global economic outlook it released on the eve of the meeting.

The US, Europe and China will all suffer a slowing economy, so their monetary and financial policies will ease, Ray Dalio, founder of Bridgewater Associates, noted at the meeting.

Expectations are rife that the US Federal Reserve System will hike the interest rate one or two times this year. The Fed has historically cut the rate by 400 to 500 basis points when the US economy is in recession. Whether the rate cut margin will prove sufficient in this round is the question of the hour.

The Fed has enough policy space, at least for now, compared with other countries' central banks, said Axel Weber, chairman of Switzerland's UBS Group, adding the Fed's balance sheet will revert to its pre-crisis state, and the US central bank will proceed with circumspection in shrinking its balance sheet.

The Belle of the Ball

China forms the focus of this year's forum. The country's gross domestic product last year rose 6.6 percent on the previous year, achieving the expected development target of around 6.5 percent for the entire year, official data show. This growth rate declined on a quarterly basis, however.

The nation's fiscal policy could be more expansionary and the central and local governments could borrow much more, Fang Xinghai, vice chairman of the China Securities Regulatory Commission told the forum.

China still has leeway to expand its infrastructure investment, he believes. "The Chinese government has a strong ability to deal with the economic slowdown," he said.

The national economy will grow by 6.2 percent in the next two years, and the government will continue to adopt proactive monetary and fiscal policies, the IMF predicts.

UBS Group will consider raising the shareholding ratio in its joint venture brokerages, Weber said. Opening the Chinese economy and allowing overseas participants marks the true introduction of competition, he added. His firm is ready to raise its investment in China, as long as it sees that the quota system can be more flexible and China can further open up its financial markets, he told Yicai Global.

China has taken a big step in opening up financial markets and services over the last year. The CSRC granted full access to three major types of institutions: securities companies, fund management companies and futures companies.

Opening up is good for China, Fang said. "We hope foreign companies from different sectors will enter China and expand two-way capital flows," he added.

The nation will seek to introduce international medium- and long-term funds into its stock market to inject more foreign capital into the A-share market this year, Fang advised this month.