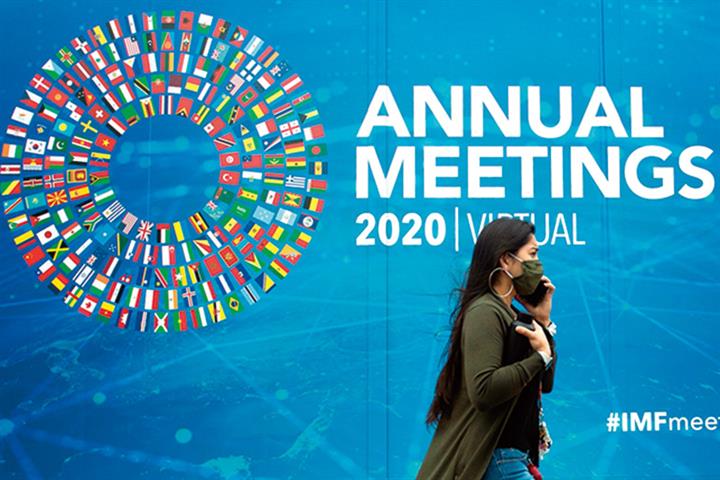 (Yicai Global) Oct. 27 -- So far, thanks to prompt and radical monetary policy, the world has averted a financial crisis despite the tremendous economic fallout from the Covid-19 pandemic, a senior official of the International Monetary Fund told Yicai Global in an exclusive interview.

The policy response by the central banks, by regulators and by finance ministries worldwide has been crucial in making sure that this medical crisis, which has triggered an economic crisis, does not also trigger a financial crisis, Tobias Adrian, the Financial Counsellor and Director of the IMF’s Monetary and Capital Markets Department, said on Oct. 16.

Unprecedented and timely policy response has helped maintain the flow of credit to the economy, creating a bridge to recovery, according to the 2020 Global Financial Stability Report released by the Washington D.C.-based organization on Oct. 3. However, vulnerabilities have increased in the nonfinancial corporate sector, as firms have taken on more debt to cope with cash shortages, and in the sovereign sector, as fiscal deficits have widened to support the economy.

The IMF lowered its annual growth forecast for the global economy to minus 4.4 percent this year from the 4.9 percent decline it had predicted in June.

Excerpts of the interview are given below:

Tobias Adrian: Our overall outlook has improved, but we are still in a very precarious situation. With a sharp contraction globally, we do see signs of recovery. China is leading in that respect, and the epidemic has been contained in China. We also see some acceleration of economic activity returning in other countries.

The policy response by the central banks, by regulators and by finance ministries globally has been crucial in making sure that this medical crisis, which has triggered an economic crisis, does not also trigger a financial crisis. We don't see a financial crisis globally right now, in particular, in terms of financial markets. Evaluations have returned risk sentiment. Prices are back to pre-crisis levels in many countries. The level of borrowing has come down after rising sharply in March. Large corporations can borrow either from banks or from the markets.

We have published a global banking stress test, and even under adverse scenarios where the pandemic recurs and where the economic crisis lasts longer than we expect, banks worldwide appear to be stable.

YG: The equity market is performing very well and has even been described as ‘on steroids.’ We are expecting a new fiscal stimulus package. The so-called Nasdaq Whale, referring to a company swallowing up vast quantities of cheap tech stock options, and other such activities remind us of how speculative and fragile the market is. If Joe Biden wins the US presidential election, tax rises will come in very quickly, denting companies’ earnings expectations. How do you evaluate the vulnerability and overflow effect of the US stock market?

TA: Policy uncertainty is a driver of market volatilities, which are more elevated around election day. Even the sell-off in the tech sector has reverted to some degree. Valuations in technology stocks are still quite stretched as people have been working more from home, using more technologies to work and to shop in response to the pandemic. Besides, the liquidity injections of central banks worldwide have fueled equity valuations. Sentiment can be fickle so it might well be that we see some volatility going forward, depending on positive or negative news about the pandemic, politics and other issues.

YG: How can we differentiate between insolvency and liquidity difficulties faced by small and medium-sized enterprises?

TA: That’s a good question. A lot of policies, including fiscal transfers, credit guarantees, lending schemes from central banks aim to help corporations that have temporary shortfalls in revenues due to the pandemic to weather the crisis. But there is also a structural change going on with sectoral reallocation and some firms might not be viable in the medium term. So in the design of the programs and the support of the public sector, it is crucial to get the funds to the right firms.

YG: The US Department of the Treasury is on track to deliver over USD4 trillion of net insurance in 2020, and corporate bond insurance has already reached USD2 trillion. What is your view of the vulnerability of bonds?

TA: Debt is rising around the world. That’s debt in the corporate sector, corporations are borrowing to weather this crisis, it’s debt in the sovereign sector, as countries are supporting their citizens and their companies to get through the crisis. But it is also the leverage in the banking system that is going up to some extent as banks are supporting economic activity by lending more. So vulnerabilities are rising in the corporate, sovereign and the banking sectors across countries.

This could indeed be risky for some countries in the medium term. At the moment the expansionary and aggressive policies are certainly appropriate, because the majority of countries are still in the midst of the pandemic. The withdrawal of policies that would tighten conditions too early would be dangerous. But once the recovery takes place, say later in 2021, it is certainly important to address these vulnerabilities through prudential policies and the restoration of capital buffers and the banking system.

YG: The US Federal Reserve announced a change to its overall monetary policy framework in August in Jackson Hole, Wyoming. Since then, less information has been coming out. What’s your take on the new policy?

YG: What about yield curve control? Should the Fed introduce this in the medium-term?

YG: China tends to adopt a Keynes approach to support industry investment as compared with the Bernanke methodology adopted by some developed countries to support businesses and households. What is your view on the future of China's policy mix in terms of monetary policy, investment policy and fiscal policy?

TA: China is on the rapid path to recovery. It is the only major economy where the IMF has forecast positive growth (1.9 percent) for 2020 and it forecasts an acceleration of growth (8.2 percent) for 2021. However, growth remains unbalanced as the recovery so far relied heavily on public support, mainly in the form of infrastructure investment, while private consumption has been recovering more slowly amid a gradual improvement in labor market conditions. Exports have held up well on strong demand for pandemic-related goods.

The People’s Bank of China provided monetary support both through rate cuts and other instruments. Financial conditions were relatively stable in February and March, perhaps because there was an expectation that the pandemic will be weathered, and markets were looking beyond the temporary shutdowns. And the shutdowns were very localized in China.

The regulators continue to sharpen regulations and to be very prudent about the banking sector and also the market-based system. The corporate bond market and local government bond market are expanding rapidly. And there's more and more international investor participation in Chinese markets. And that is very important for the development of the financial markets in China.

YG: There have already been great rate differentials between the US dollar and the Chinese yuan, attracting more capital inflow. China is now opening up its bond and equity markets and this propels the strengthening of the yuan. What is your view on the maneuvers of the PBOC in terms of the yuan exchange rate?

TA: I don't have comments about the exchange rate.

YG: China has started to pilot its central bank digital currency in Shenzhen. Will this form of M0, the most liquid measure of money supply otherwise known as cash, quickly move into M1 and M2 broad money supply? What is your prediction?

TA: We are following developments in China closely, including the development of the CBDC. China is really at the forefront of implementing such pilot programs. My understanding is that when there’s a shift of savings into CBDC from deposit accounts there is a drainage of reserves of commercial banks so the shift is neutral with respect to total reserves outstanding. Also, a non-interest-bearing CBDC would come closest mimicking cash, limiting the potential shift from bank deposits to CBDC.

YG: China is piloting the CBDC domestically. Do you think it should also focus on cross-border transactions?

TA：I think that at the moment, the pilot is squarely focused on domestic activity. And my understanding is that the PBOC’s plans for the moment are domestic. Cross border CBDCs would require convertibility.

A few more countries will be coming out with CBDC pilots, and we’ll see what the cross-border impacts of those are. Next week the IMF will publish a paper about this international dimension of digital currencies, as well as private stable coins and their impact on monetary policy and micro activity across borders.

YG: The exchange rate of the yuan has become very strong in the post-Covid-19 era. Is now a good time for the internationalization of the yuan and for capital account convertibility?

TA: I don't have a view on the timing. We are watching closely what authorities in China are doing.