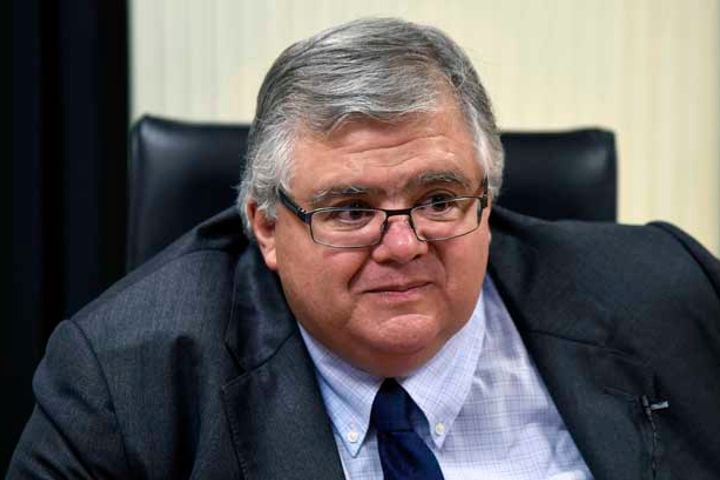 (Yicai Global) Nov. 1 -- The International Monetary Fund cut its global growth forecasts for the first time in the past two years last month. While the global economy is expanding, trade frictions and a strong dollar are having a dramatic impact on emerging markets.

Regressing tax reform momentum, the impacts of trade tensions and interest rates have triggered market concern for the American economy, as evidenced by the frequent United States stock crashes.

How will the global situation change in the turbulent 2018? What are the global risks worthy of attention? Should Chinese policymakers choose to reduce risk or stabilize the economy in the face of mutual transmission of external pressure and internal risks affecting confidence?

Yicai Global discussed these topics with Agustin Carstens, general manager of the Bank of International Settlements, in an exclusive interview. Below is a transcript of the interview.

Yicai Global: The IMF cut its global growth forecasts for the first time over the past two years in October. Though the global economy is expanding, uncertainties such as trade frictions have had a dramatic impact on emerging markets. How do you view the risks these emerging markets face?

Agustin Carstens: The IMF has revised down its global growth forecasts this year and the next to 3.7 percent in the World Economic Outlook report published in October, but it's still a relatively high figure. I think the difference between what we are seeing now and at the beginning of this year is the divergence in growth among advanced economies and declining growth potential in emerging markets due to the trade issues. That's probably the only major news event in the last six months.

The trade issues affect the potential growth of several emerging markets, in particular in the Asian region. The trade dispute between the US and China is escalating, and the interconnectivity of Asian economies with China has been strong.

YG: All US treasury yields have surged and a sell-off in the US stock markets has been ongoing since October. Do you think it indicates the beginning of a certain market change?

AC: Uncertainty created by trade disputes has started to affect investment projects, and generated issues with respect to financing. Besides, I think what is important is that over the past 10 years, unconventional monetary policy has created plenty of liquidity out there in the market, and there has been a lot of search for yield, which has led to lots of assets being bought in emerging markets.

There could be some adjustments in portfolios now due to the normalization process and trade disputes. The main challenge emerging markets face is more uncertainty created by trade disputes and the normalization process. Reducing uncertainties is important for emerging markets now, which means that they need to have much stronger market fundamentals so that the risk profiles they present could be more balanced.

The equity selloff happened not only because of the normalization process and trade disputes but also due to some market dynamics. Usually when the US raises interest rates, certainly there are some adjustments in the market, especially given that there are some stocks that are very richly priced, so it's not surprising that some downward adjustments are taking place. I don't think right now we are in the circumstance where we have to read too much into it, because it is just a part of the adjustment process, but we need to keep monitoring the situation.

YG: The global economy has entered the late stage of its expansion cycle, and people from all walks of life are becoming more concerned. Other countries are affected and their economic momentum is slowing, and the US economy is not immune to this. The end of the expansion cycle and the beginning of the depression often require a trigger. What risks do you think we need to focus on in the future?

AC: Trade tensions have been the most unexpected aspect in the past two years. They have not turned out to be just campaign rhetoric but have materialized. Still, recently some of the trade tension has been eased a little bit because of the United States-Mexico-Canada Agreement. The US is giving mixed signals by reaching agreement with Mexico and Canada but keeping a tough stance towards China. Let's hope that pragmatism prevails, and we can smooth some of the rough edges.

Other geopolitical issues also need to be considered, for example Brexit and Italy's budget crisis. Oil prices have been increasing for some time, and if this continues, it will take some steam out of growth prospects. All in all, although vulnerabilities still need to be watched, the central scenario of a relatively strong recovery holds.

YG: The Fed is raising interest rates against criticism from Trump, who believes this is harmful to the economy. Do you think he threatens the Fed's independence?

AC: The independence is deeply rooted. I think the declarations by President Trump are just generating noise in the market. The Fed needs to keep its course and do what it needs to do. The best thing possible right now is for the Fed to complete the normalization as soon as possible, because this will take some uncertainty away. That will set the base for smoother market performance and better US economic growth.

YG: Market predictions for interest rate increases lag behind the Fed's own forecasts. Once the market anticipates these issues and re-prices, the market may be hit. If the Fed raises interest rates too fast, it may also inhibit the momentum of economic growth. How do you view the risks that the differences between the market and the Fed's forecasts may bring?

AC: The Fed has anticipated these issues and that the way to confront this is with much better communication. I think they have very good communication with the market in providing forward guidance. These days the Fed's moves have been well anticipated. If you look at the Federal Open Market Committee minutes/dot plot and the market expectations shown by the money market, you don't see an alarming wedge. That will facilitate the transition toward more conventional monetary policies without market hiccups. I think as long as the Fed maintains consistency as it usually does, and there are no market surprises, I don't see any major source of concerns.

YG: China's deleveraging process has been going on since 2016. The Chinese government has begun to take measures to stabilize the economy due to China's economic slowdown and booming external uncertainty this year. However, CHina's deleveraging process is underway, and the release of financial risks has not yet been completed, so the current policy space is not as good as it used to be but the economy needs support. How does one strike a balance between deleveraging, reducing economic imbalances and supporting economic growth?

AC: Something that is frequently overlooked is that the process of addressing over-leveraging in China started many years ago, and a lot of progress has been made. Even though the cleansing process still needs to go on for a while, China is doing much better given the deleveraging measures taken by the authorities. A lot of progress has been made in deleveraging and dealing with new credit origination. The banking system and new credit origination should be of better quality because of measures that have been applied. This is important because the additional credit extension should be of better quality than the past. With all these in place, you can have credit contributing to economic growth without generating medium to long-term vulnerabilities.

As for how to balance the need to ease monetary policy to support growth and deleveraging to curb imbalances, I am confident that with the collection of instruments that the People's Bank of China and regulatory authorities have, they can move in the direction of having a supportive stance for economic growth and addressing the legacy issues that are substantial.

YG: The Chinese government and state-owned enterprises are playing an important role in China's economic development because of China's national condition, while market entities in most western countries are private firms. This results in western countries' concerns, discussion, criticism and misunderstanding of the Chinese economic pattern based on fair competition. How can China respond to these concerns through reforms and communication while improving its own development?

AC: One of the things that we've learnt from China is that it's a very dynamic economy. The process of investment, all the headway they have made in terms of incorporating technological developments into the productive systems, the inroads China has made in the digital economy -- these are all impressive. It is facing a difficult situation now with the US. But I think the ability that the Chinese economy has shown in the past decade or more to adapt to the circumstances makes me positive about how China can respond to the environment. It will be challenging, but the flexibility of the economy, the entrepreneurship and the capacity to respond to changes have been remarkable and I'm optimistic China can navigate these waters.

YG: The yuan has fallen nearly 10 percent against the dollar this year, and China's central bank has taken action to stabilize this since August. If the yuan became a free-floating currency, there would be the risk of capital exodus and panic, and it will cost a lot to keep the yuan's exchange rate against the dollar below the politically sensitive level of 7. What would you do if you were the governor of the People's Bank of China?

AC: So far the measures the PBOC has undertaken look quite good to me. I think they have been flexible in terms of drawing from the very rich toolbox they have. They have been using different instruments at their disposal in difficult situations, so that they can achieve the right mixture of policies to attain the different objectives they have now. The PBOC has so many objectives, as they need to take care of financial stability, capital flows and inflation. The rich policy space is enough to handle the circumstances now even though it's challenging. Of course, moving ahead, it would be more difficult if the trade disputes keep growing. But the resilience of China's economy and the instruments they have make me think the risks are not overwhelming.

YG: Trump and other critics think China is manipulating the yuan exchange rate. What is your opinion? Should the exchange rate be put on the list of things China and the US need to discuss regarding their trade tiff?

AC: I can't speak for the US Department of the Treasury, but the minimum to do is just to compare the performance of the Chinese economy and yuan with other emerging market currencies which are subject to similar pressures. The yuan exchange rate is not underperforming with respect to other emerging market currencies, so this is an important factor when making a judgment about the performance of the yuan and the PBOC's intention.

Looking at the data you can see the yuan has been adjusting appropriately. At the end of the day, hopefully the US will feel convinced that the behavior of the Chinese currency is in line with market developments. I don't think there is much reason why this should be put into doubt.