A Shrinking US Economy: What Does It Mean for China? 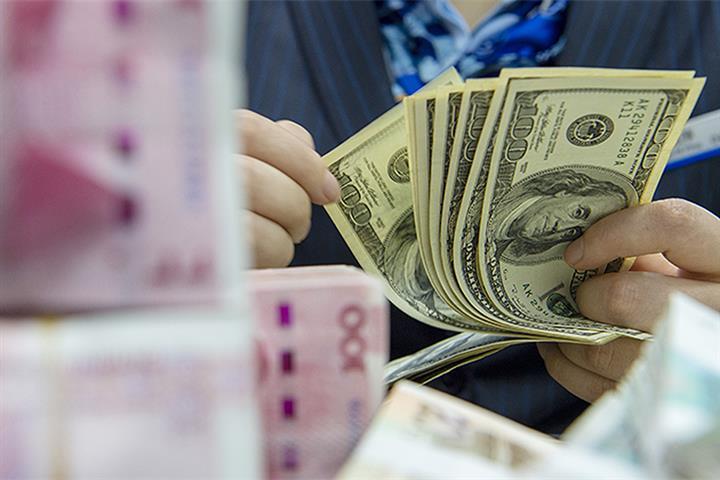 A Shrinking US Economy: What Does It Mean for China?

(Yicai Global) May 5 -- Everywhere I look, the economic news is pretty disappointing.

Here in China, the April Purchasing Managers’ Indices dropped sharply (Figure 1). Combining these data and those for traffic congestion, it appears likely that the economy did not grow at all last month. 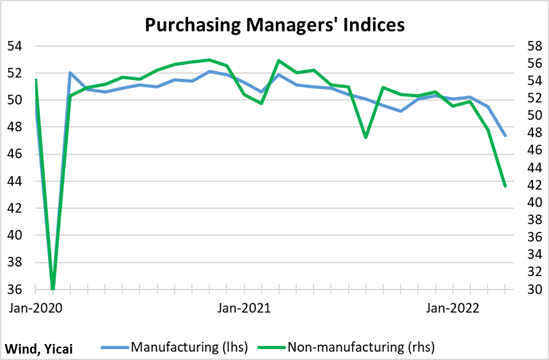 In the EU, GDP growth slowed to 1.6 percent quarter-over-quarter at annual rates. This is below the 2.0 percent it averaged over 2017-19. Europe’s tepid recovery from the pandemic puts the economy some 4 percent below its pre-Covid trend – the equivalent of two lost years of economic output.

The US National Accounts, released on April 28, showed that the economy contracted by 1.4 percent quarter-over-quarter at annual rates. On average, the economists polled by Reuters had expected 1.1 percent growth.

With its economy only one negative quarter away from falling into recession, what sort of risk does a weak US pose to China’s efforts to rebound from the challenges caused by the lockdowns?

Looking beneath the headline figure, the key takeaway from the first quarter’s National Accounts is not that the US economy is unexpectedly weak. Rather, the data show that there is a deep imbalance between robust aggregate demand and anaemic aggregate supply.

Figure 2 presents an add-up of GDP growth by demand component. I have averaged 2020 and 2021 to look through the volatility of those years.

The strength of domestic demand is reflected in the 3 percentage point contribution of final sales to domestic purchasers (consumption plus fixed investment). This was about 1 percentage point higher than over 2019-2021.  The problem was that the US economy had difficulty in servicing this demand, which was ultimately satisfied by increased imports (a reduction in net exports) and an inventory drawdown. 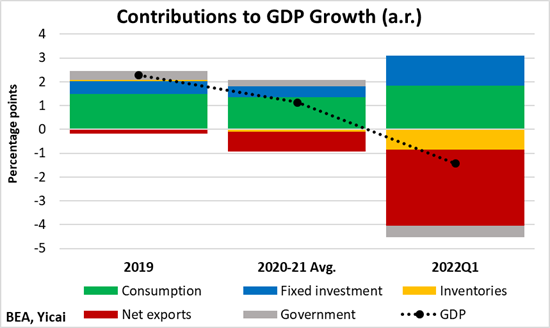 It is not surprising that strong US domestic demand has led to a very buoyant labour market. At 3.6 percent, the unemployment rate is very low. And job openings hit an all-time high of 11.5 million at the end of March.

What explains the US’s labour shortage?

It seems to be fear of contracting Covid.

In March, the job openings rate (vacant positions divided by employment) was 7 percent. Looking across the various industries, the job opening rate was most elevated in high-contact occupations like accommodation and food services (10 percent) and professional and business services (9 percent). Even in manufacturing, the job openings rate is over 6 percent, compared to 3 percent in 2019 (Figure 3). Manufacturing firms’ difficulty in engaging workers weighs on their ability to satisfy domestic demand. And it is one of the reasons that imports have been so strong. 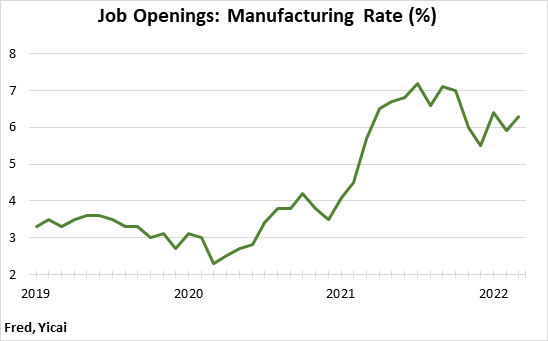 Another constraint on production that US manufacturers must manage comes from supply bottlenecks. The Institute of Supply Management (ISM) has a measure of “Supplier Delivery Times” which is a good proxy for these bottlenecks. 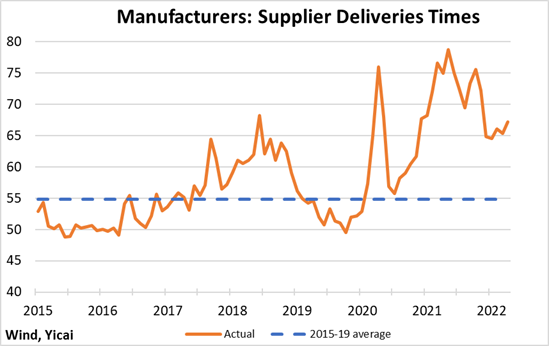 Even as its economy shrunk, the US’s supply-demand mismatch created an opportunity for Chinese exporters. In the first quarter, China’s exports to the US were up 17 percent year-over-year (Figure 5). This strong performance follows on 28 percent growth in 2021. 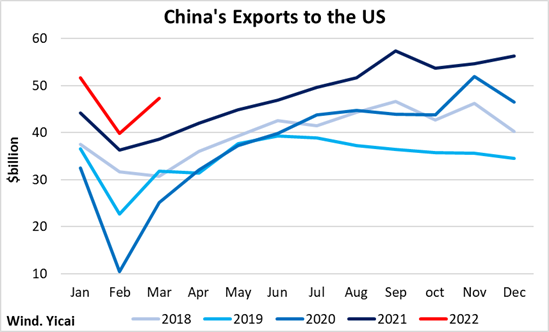 With China now experiencing supply bottlenecks of its own, will it be able to go on benefiting from the US’s strong domestic demand?

The lockdown in Shanghai will clearly constrain export growth. However, China’s massive investment in infrastructure gives it a certain amount of resilience to unforeseen shocks. For example, a friend of mine exports building materials to South America. He had shipped his merchandise out of Shanghai. Now he has re-routed his cargo to Ningbo, 290 km south of here. Comparing traffic congestion in China’s key port cities to last year, we see that the weakness in Shanghai and Dalian is being offset by strength in the other cities (Figure 6). These data suggest that, like my friend, exporters are looking for creative workarounds. 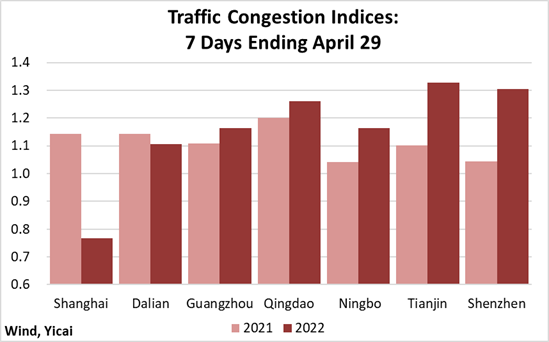 A more important question is how much longer the lockdown in Shanghai will last. The answer will depend critically on the speed with which new infections can be brought down to an acceptable level. As of May 4, they had fallen to just under 4700 or the same as in late March. Thankfully, the Omicron outbreak remains largely confined to Shanghai (Figure 7). 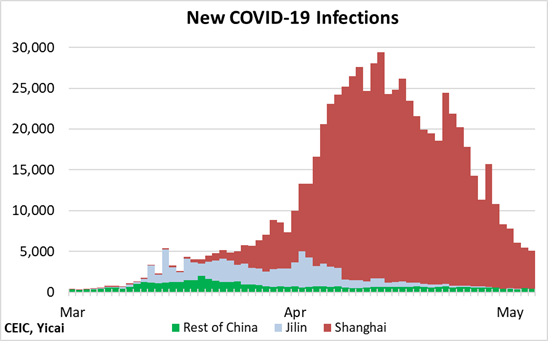 The Federal Reserve continued to take action to address the US’s supply-demand imbalance by raising the Fed Funds rate by 50 basis points on May 4. The Fed’s job is a difficult one. By tightening monetary policy, it wants to bring aggregate demand down in line with aggregate supply. To the extent that the supply bottlenecks and Covid-related labour shortages are temporary, aggregate supply could rise over time and the required interest increase need only be modest. The risk is that the supply constraints are longer-lasting.

The Fed is widely expected to successfully engineer a soft landing, with the Fed Funds rate peaking at just over 3 percent early next year. Indeed, equity markets cheered the Fed’s slow and steady approach to rebalance the economy by jumping 3 percent after the interest rate announcement.

Monetary policy affects the entire spectrum of interest rates. While the Fed Funds rate has only risen by 0.75 percentage points during this tightening cycle, longer-term rates have increased by twice as much.

Higher US interest rates will attract global liquidity and lead to capital outflows in emerging market countries like China. Given its current account surplus, prudent macroeconomic policy and high level of reserves, China should have no problem managing these outflows. Indeed, foreign finance accounts for a very small part of China’s capital needs.

These international capital movements will realign exchange rates, with the US dollar appreciating and the currencies of emerging market countries falling. For countries that borrow heavily in US dollars, such a realignment can be problematic. For China, which is an international creditor and borrows mostly in renminbi, a depreciation will not pose a risk to its financial stability.

Since the US dollar is likely to appreciate against almost everyone, I would expect that China’s trade-weighted exchange rate will be broadly unchanged. Moreover, a modest depreciation versus the US dollar can help Chinese exporters sell into a still-robust US market.