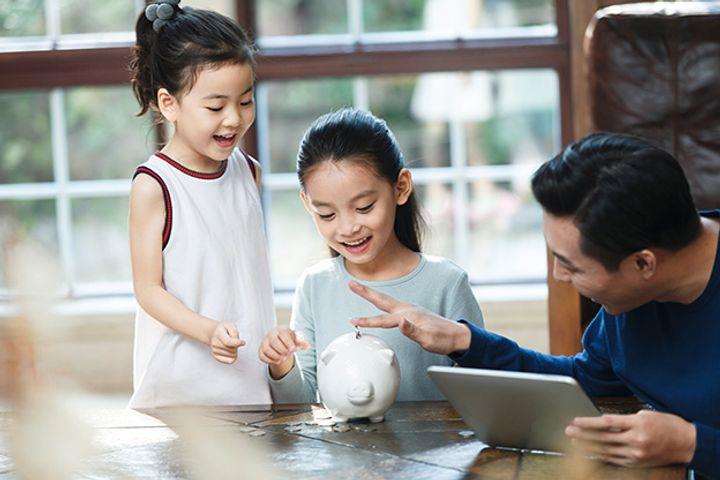 (Yicai Global) May 12 -- There has been a lot of chatter in the press about the Chinese government's setting a growth target for this year and whether or not it will be able to achieve its longstanding goal of doubling incomes from 2010 to 2020.

While this year’s economic prospects are clouded by uncertainty, a recent study by researchers at the People’s Bank of China (PBOC) indicates that China has already achieved its objective of building a moderately prosperous society (小康社会) – at least in its cities.

The study, published in the latest issue of China Finance, highlights the results of a comprehensive survey of urban families' finances conducted at the end of 2019. It reports that median household net worth stood at CNY1.41 million or close to USD200,000.

The US’s own Survey of Consumer Finances was last conducted by the Federal Reserve in 2016. If I adjust its findings for inflation, then median US household net worth was about USD104,000 in 2019. Thus, one can say that the typical US household is only about half as rich as the typical Chinese urban family.

Since per capita GDP in the US is close to five times higher than in China, how can we explain such a surprising result?

The very unequal distribution of wealth in the US is a big part of the story. The graph below shows that while median US household wealth is about half that of Chinese urban families, average US household net worth is about 80 percent higher than China's USD413,000. 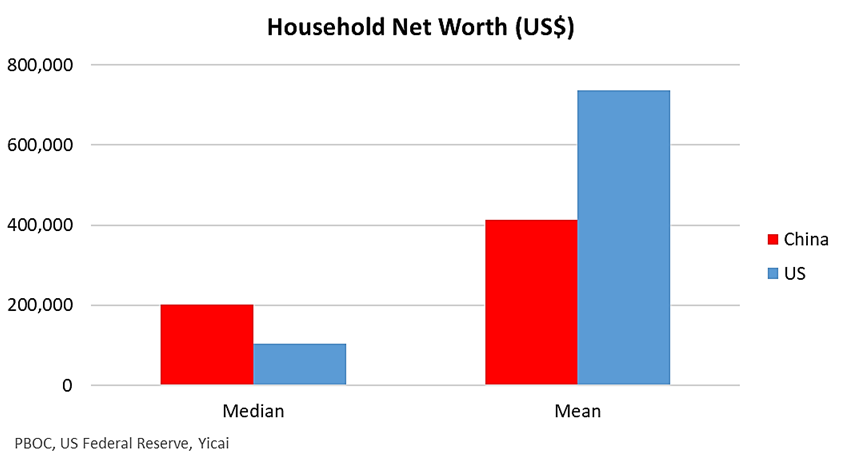 The ratio of average to median net worth is a measure of how equally wealth is distributed. If everyone’s wealth was exactly the same, the ratio of the two net worth measures would be 1.0.  China’s mean household net worth is double its median. The ratio in the US is seven times, pointing to a much more unequal distribution of wealth.

Since it lies right in the middle of the wealth distribution, we can think of the median household as “typical.”Half the families are richer and half the families are poorer than it is. On average, American families are wealthier than Chinese ones. There are a lot of really wealthy American families that pull that average up. But the typical American household remains poorer than its Chinese urban counterpart. Note that I am making these comparisons in 2019 US dollars and am not accounting for the fact that a US dollar buys more in China than it does in the US.

A second reason that Chinese urban households are relatively wealthy is that home ownership is quite widespread. According to the PBOC study, 96 percent of urban households own residential property. The corresponding figure for the US is only 64 percent. The gap between US and Chinese in home ownership is even more striking at the low end of the income distribution. In the US, only one-third of the families in the lowest income quintile own a home. In China, 89 percent do.

In fact, many Chinese families own more than one property: 31 percent of them have two and 11 percent have three or more. On average, each urban family owns 1.5 residential properties.

Chinese family wealth does not simply rest on inflated real estate values. Residential property represents just under 60 percent of household assets, with financial assets and other real assets (shops, productive equipment, vehicles, etc.) each accounting for close to 20 percent. Moreover, from the information in the study, I estimate that the price-to-income ratio of these households’ residential property holdings at 3.7. This is fairly close to the median house price-to-income ratio in the US, 3.6, according to Demographia's most recent survey(http://demographia.com/dhi16-intro.pdf).

The final piece of the puzzle is understanding how Chinese urban households can have such a high rate of home ownership and such a low rate of indebtedness.

Chinese households do have much higher savings rates than their US counterparts and that is an important factor. But more important was the way in which the housing stock was privatized. Up until the late 1990s, almost all residential property belonged to state-owned institutions, which provided low-rent accommodation to their employees. As part of the state-owned enterprise reform program, the government relieved firms of the burden of providing housing for their workers. Urban households were able to purchase their apartments from their employers at reasonable prices, leading to today’s high rate of home ownership and supporting urban prosperity.