How Should We Think About Rising Home Prices?

How Should We Think About Rising Home Prices?

(Yicai Global) June 24 -- It seems like they are everywhere. Mostly male, they are dressed in black trousers, white shirts and dark ties. They typically have whiteboards on which they list apartments’ dimensions, their number of rooms and the asking price.

When I linger to look at the information – I’m a numbers guy after all – they approach eagerly and ask if I’m looking to buy. When I tell them I already have a place, they ask if I want to sell.

China’s always vibrant property market has gone into overdrive this year. The National Bureau of Statistics recently reported that in the first five months of the year, sales of newly constructed residential property were just under 600 million square metres (Figure 1). That’s up by more than a fifth from pre-pandemic levels.

Notwithstanding the surge in sales, the increase in new home prices has been modest. According to the 100-city data compiled by the China Index Academy, home prices were up just over 4 percent year-over-year in May, well below the recent peak of 19 percent in January 2017.

Home prices have not spiked, in part, because developers have been able to satisfy demand by selling out of inventory. In the past three years, the volume of newly-started projects well-exceeded sales, which had peaked in 2018 (Figure 1). With supply exceeding demand, price pressures have been contained. 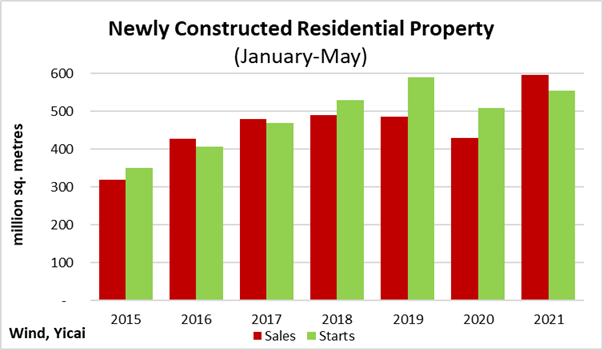 The concern is that this inventory may dry up soon and home price inflation could return to the high rates recorded five years ago. The data show that we could, indeed, be at a turning point.

To illustrate demand pressures, I have constructed a “sales gap” measure, which is the monthly volume of sales minus the volume of starts, expressed as a percentage of sales. I smooth the series by taking a 12-month moving average. An increase in the sales gap implies rising excess demand for housing. The year-over-year change in the 100-city price index has tracked the sales gap fairly well since 2012 (Figure 2). The recent rise in the sales gap suggests that we should brace ourselves for higher home price inflation in the coming months. 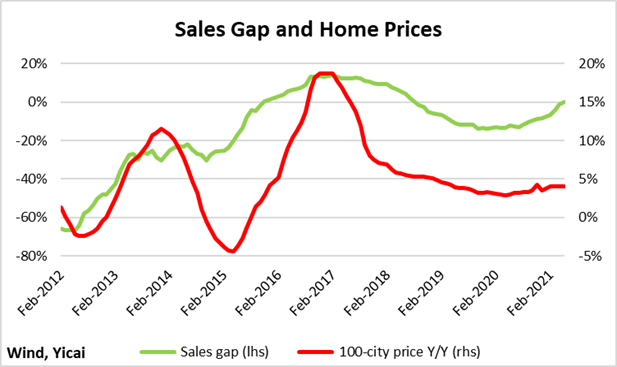 Senior Chinese officials are also concerned about emerging price pressures. Guo Shuqing, the Chairman of the China Banking and Insurance Regulatory Commission, warned of serious real estate bubbles, in some areas, during the recent Lujiazui Forum.

In order to get a more nuanced picture of home price dynamics, we turn to data collected by RIWI (www.riwi.com), which uses patented, machine-learning technology to reach the broadest possible set of respondents by continuously drawing in populations otherwise not included in surveys.

In China, anyone using the Web could be randomly exposed to a RIWI survey. The vast majority of RIWI’s Chinese respondents have never or rarely taken surveys before. Typically, Chinese surveys only draw on those living in key urban centres and on habitual, incentivized survey respondents. Or they use content drawn from social media. RIWI’s surveys are anonymous, continuous, random and do not collect personally identifiable information, increasing the likelihood that respondents will answer authentically.

Between January and June 2021 (and ongoing), we used RIWI technology to randomly engage respondents from China’s Web-using population to answer questions about their economic behavior, including how the value of their homes had changed over the past 12 months. The resulting data were gathered 24/7 and on a continuous basis. The responses came from all over China, including all tiers of cities. RIWI’s respondents are un-incentivized. They answer the survey because the questions seem interesting.

We sorted the sample into six groups by home-price change: those whose prices fell, those that remained the same, and those whose prices rose by 5, 10, 15 or 20 percent and more.  We also divided the respondents into three regions: Beijing, Shanghai and everywhere else in China.

The distribution of the price groups was strikingly similar across all three regions (Figure 3). This suggests that price dynamics are driven by intra- rather than inter-regional factors. Most of the responses cluster around a zero price change. However, the distribution has a “fat tail” with 15 percent of respondents reporting a price change of 20 percent or more. 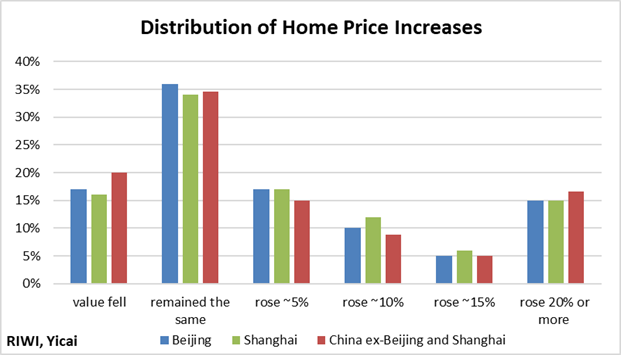 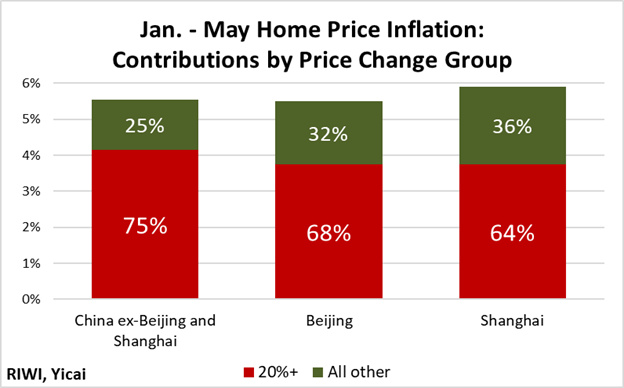 The RIWI data imply the price pressures we are seeing are narrowly based in a relatively small share of properties. What do we know about the people who own these homes?

It turns out that their owners earn higher incomes, are better educated and are more likely to own their own companies than those in the rest of the sample. From these characteristics, we can assume that they live in better housing. The relatively rapid increase in the price of better housing suggests that the demand for upgrades is what’s driving home price inflation.

This is not surprising. Many Chinese apartments are small. Relatively few have elevators, with the six-floor walk up being a popular configuration. And there is a strong demand for apartments in good school catchment areas, which sell at premium prices. With the strong increase in incomes in recent years, it is understandable that Chinese families are willing and able to spend more on housing.

If the demand for upgrades is driving home price inflation, there are implications for policy as well. Implementing broad-based measures may be inappropriate should the authorities want to manage rising price pressures. Instead, they may want to focus more narrowly on policies which increase the supply of and reduce the demand for higher-end real estate.

For many observers, China’s demographic decline means that the country has already reached “peak housing”. However, the implication of the granular data provided by RIWI’s surveys is that the demand for upgrades could be a source of strength for years to come. And that’s good news for all those guys with the whiteboards.