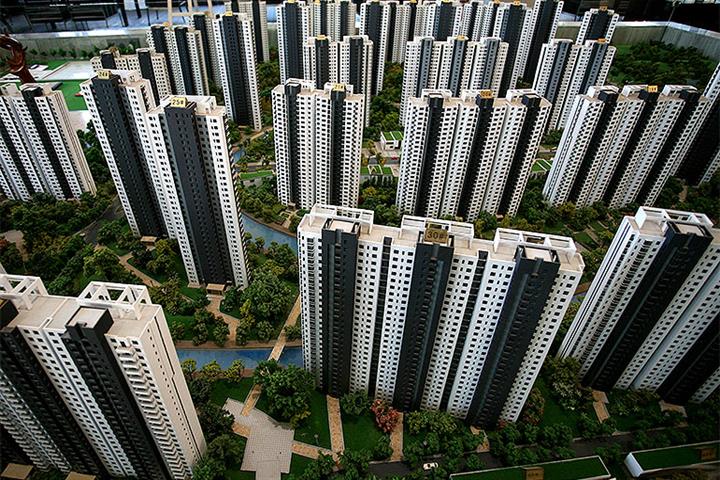 (Yicai Global) July 29 -- Property developers are having a tough year.

In the first half of 2021, there have been several high-profile defaults: China Fortune Land in February,  Chongqing Sincere Property in March and Sichuan Languang Development this month. Now, all eyes are on China Evergrande Group, which is the country’s most indebted developer and whose stock and bond prices have fallen sharply.

At first glance, the timing of the developers’ difficulties seems odd. The market for residential property is red-hot. The volume of new home sales in the first half of the year is up close to 30 percent from last year and close to 20 percent from a pre-pandemic 2019.

But developers’ problems are structural, not cyclical. Their business model involves borrowing large sums to acquire land and then constructing apartment blocks, which typically take three years to complete. Over time, land prices have risen rapidly, increasing the amount developers must finance and putting pressure on their debt-fueled business model.

Moreover, competitive pressure has led to more industry concentration. There are close to 100,000 property developers in China, but the share of sales accounted for by the top-three and top-thirty firms has almost tripled over the last ten years (Figure 1). 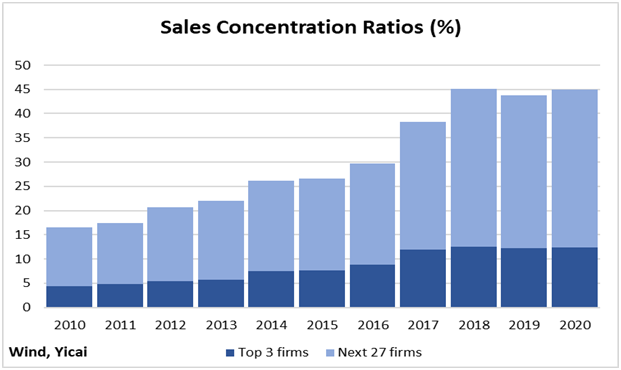 Even as the business of property development has become more challenging, the authorities have become increasingly concerned about developers’ indebtedness and its implications for financial stability.

Last August, Guo Shuqing, the Chairman of the China Banking and Insurance Regulatory Commission, called real estate the biggest threat to China’s financial stability. He referred to it as a “grey rhino” – a highly probable and potentially high-impact risk, but one that attracts insufficient attention.

While the authorities have always been mindful of the property market, last autumn, they asked developers to comply with a series of guidelines to improve their creditworthiness. These guidelines are limiting their ability to borrow and making their financial stress more acute.

How big is the grey rhino? How much do property developers’ owe and who are their creditors?

According to the National Bureau of Statistics, developers’ total liabilities amounted to CNY76 trillion in 2019. That’s a huge number. To put it in context, GDP that year was CNY99 trillion.

It is important to note that a large portion of developers’ liabilities represent advanced purchase payments that homebuyers have made for their apartments. These liabilities do not bear interest. They are a type of interest-free loan to the developers. Moreover, they do not have a specific maturity. The buyers assume the risk for construction delays, which extends the time between their prepayment and move-in dates.

Let’s do an add up of developers’ interest-bearing liabilities, which are largely funded by the banks, the trust companies and the bond markets.

As at the end of 2020, Chinese banks had CNY49.5 trillion in real estate-related loans outstanding. Of these, CNY34.4 trillion were personal mortgage loans. The remaining CNY15.1 trillion – about 11 percent of the banks’ overall loan book – appear to be loans for property development.

Trust companies have a somewhat larger exposure to developers. As at the end of 2020, 14 percent of trusts’ funds were invested in real estate, a total of CNY22.8 trillion.

The International Capital Markets Association (ICMA) estimates that, at end-2020, developers’ outstanding bonds in the onshore market totalled CNY2.1 trillion. According to ICMA, developers also had USD165.5 billion (CNY1.1 trillion) outstanding in offshore bonds. While their exposure in the onshore market is about 6 percent of the value of all bonds outstanding, their offshore exposure accounted for just under a quarter of the entire market.

Adding up the funds raised from these four sources, we estimate that property developers’ interest bearing liabilities amounted to CNY41.1 trillion at the end of last year (Figure 2). This is still a very large sum, equal to 40 percent of GDP and about a quarter of all non-financial corporate finance outstanding. 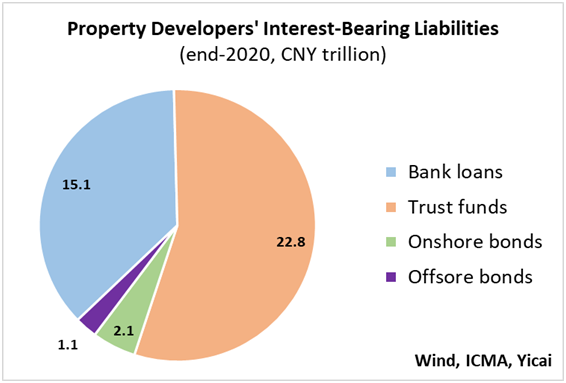 The authorities are concerned about developers’ leverage for three reasons.

First, the sheer size of their liabilities represents financial stability risks – especially to the banks and the trusts. Second, the developers’ ability to borrow increases the cost of housing. This is because it allows developers to bid aggressively against each other at land auctions, driving up the price of land and the cost of the finished apartment. Third, the significant resources currently devoted to property development are not available to invest in projects that are more likely to increase the long-run productivity of the economy.

To address these concerns, the authorities have, for some time, put rules around how much banks could lend to property developers and the uses to which these funds could be put. Last fall, a new and colourful framework was introduced to reinforce the health of developers’ balance sheets.

Called the “Three Red Lines”, this framework links the amount of borrowing a developer can undertake to its ability to respect thresholds for three financial ratios: liabilities (less prepayments for apartments) divided by assets, net debt divided by equity and cash divided by short-term debt (Table 1). 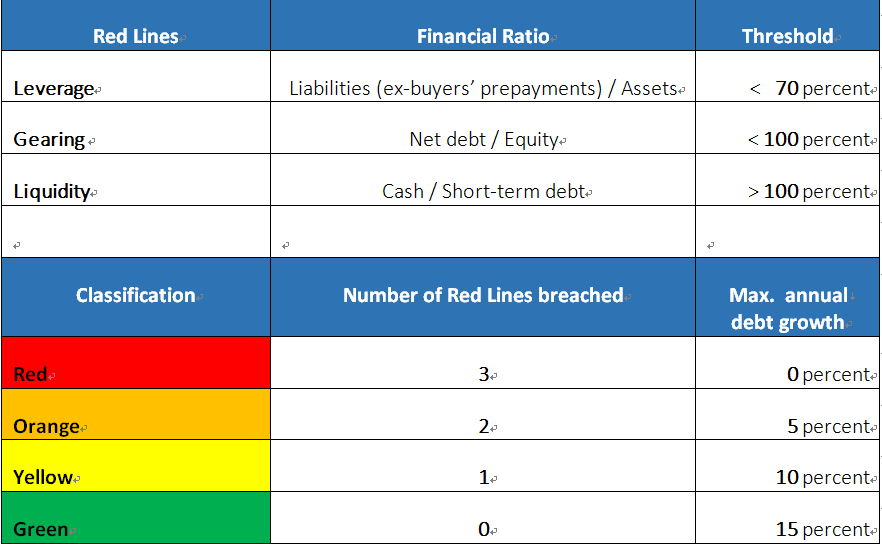 The framework was first applied to the largest developers, which have three years to fully comply with the three red lines. However, it is expected to be gradually expanded to smaller- and medium-sized developers over time.

Developers are implementing the framework by cutting the prices of new apartments to increase cashflow, selling non-core assets and seeking operational efficiencies. Indeed, it appears that they are making progress. In April, Bloomberg reported that 33 of the 66 major developers it tracks met all three of the thresholds. This was an improvement from only 14 developers in October.

Meanwhile, the authorities are taking no chances. They reportedly asked the banks to stress test their exposures to Evergrande and assess the impact on their capital of potential losses on their loans to the developer.

While these are clearly difficult times for China’s property developers, at least they can take advantage of the cyclical strength of sales to facilitate their deleveraging. Moreover, it is a good sign that the macroeconomic recovery is sufficiently robust and China can focus on reining in financial risks.

It’s challenging to protect the system from black swans. By their nature, these risks are hard to quantify and difficult to predict. However, it is only prudent to take aim at grey rhinos once conditions permit.