Q3 GDP: Almost Back to Trend 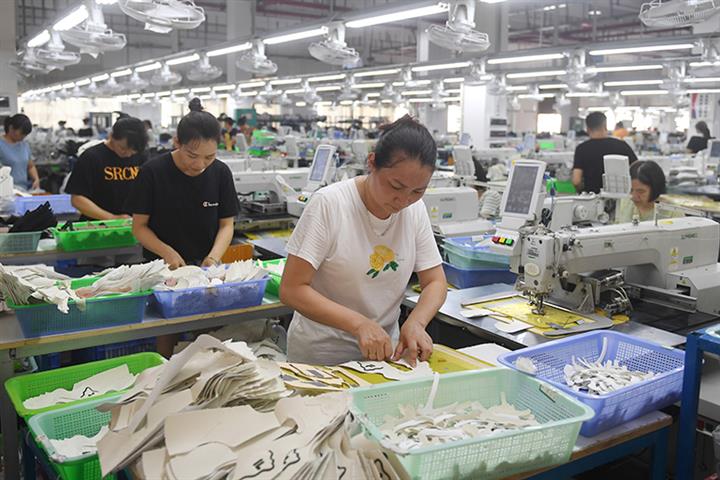 Q3 GDP: Almost Back to Trend

(Yicai Global) Oct. 31 -- On October 24, China’s National Bureau of Statistics (NBS) released its National Accounts for the third quarter of 2022. GDP growth in Q3 came in at 3.9 percent year-over-year, slightly higher than the 3.7 percent predicted by the Chief Economists surveyed by the Yicai Research Institute.

Figure 1 illustrates the quarterly level of GDP and compares it to the pre-pandemic (2018-19) trend. The strong growth in Q3 more than offset the decline in Q2. Moreover, it cut the gap with respect to the trend from 4.2 to 1.7 percent. Should GDP increase by 2.9 percent in the fourth quarter, then the economy’s productive capacity would be back to what we might have expected before the pandemic hit.

Returning to trend three quarters following a sharp Covid-induced decline would mirror the Chinese economy’s experience in 2020, when GDP fell sharply in Q1, recovered strongly in Q2 and was essentially back on trend by Q3. 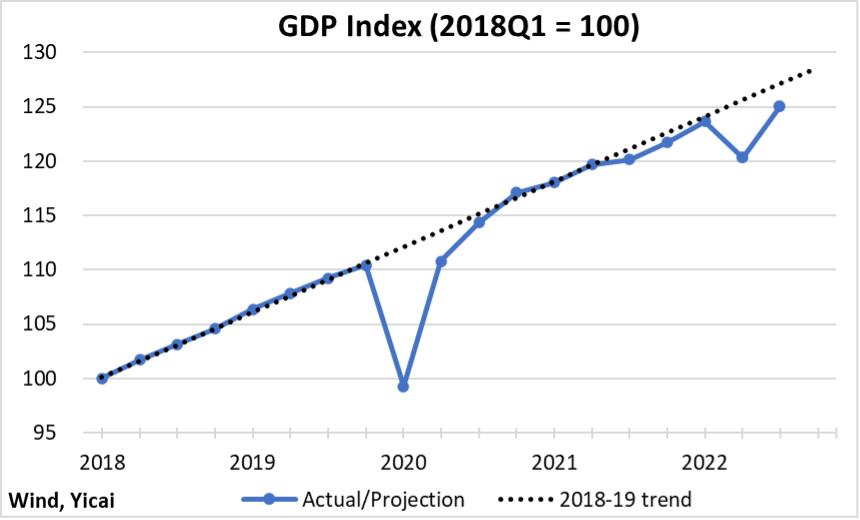 Many analysts focus on the economy’s year-over-year growth rate. Should GDP return to trend in Q4, the economy’s annual growth rate would be 3.8 percent, 1.7 percentage points below the 5.5 percent targeted at the beginning of the year.

However, the weak growth in 2022 provides a “low base” for 2023. If we assume that the economy grows at the pre-pandemic trend next year, then 2023’s growth would come in at 6.5 percent and cumulative growth for the two years would reach 10.3 percent.

While GDP could return to trend next quarter, there will likely be significant changes in the composition of aggregate demand compared to what we saw in 2019.

Figure 2 shows the contributions of the three broad sources of demand, so far this year, compared to the 2020-21 average and to 2019. While the contribution of net exports has been resilient, those of consumption and investment have shrunk considerably. 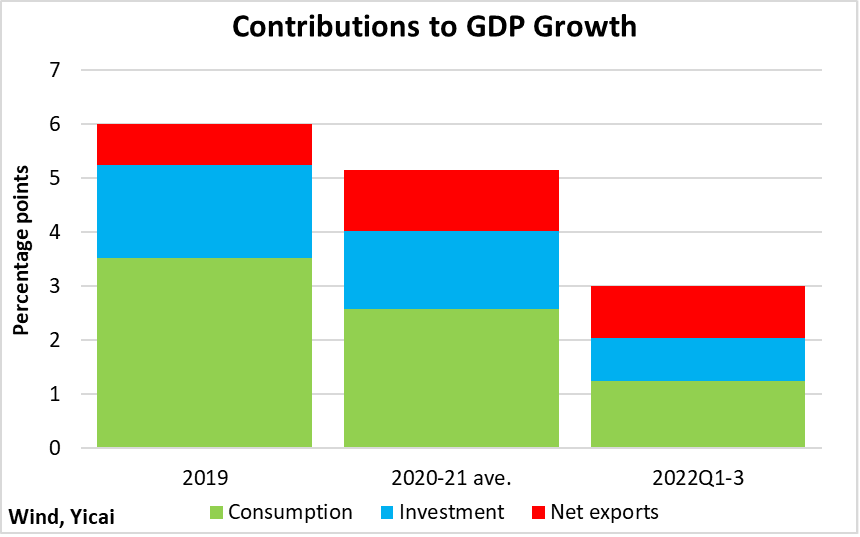 In real terms, personal disposable incomes only rose by 3.2 percent year-over-year, so far, in 2022. This is only about half as fast as during 2018-19 (Figure 3). Slowing income growth affects consumption directly. 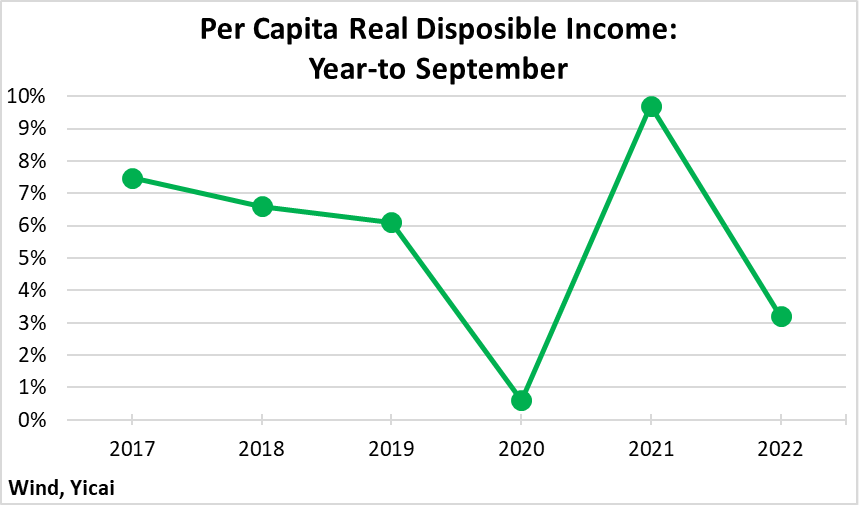 Moreover, consumption is also suffering from the indirect effect of consumer caution. The latest survey from the People’s Bank of China (PBOC) shows that, despite the strong recovery in Q2, consumers remain quite apprehensive about their futures. Sentiment toward both current incomes and future employment ticked up but remain well below pre-pandemic levels (Figure 4). 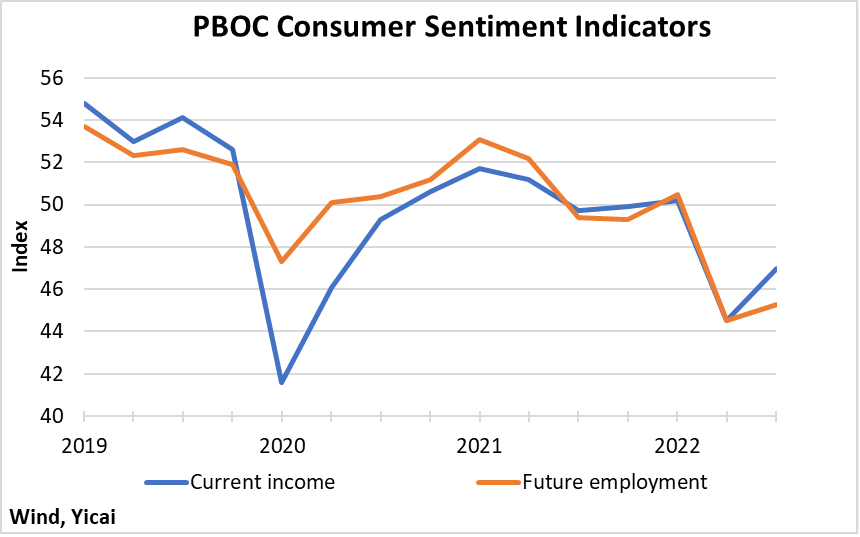 Uncertainty over incomes and employment is leading households to increase their precautionary savings. The PBOC’s survey shows that the share of respondents that indicate that they will increase their savings, rather than consume or invest more, remains very high, at 58 percent. 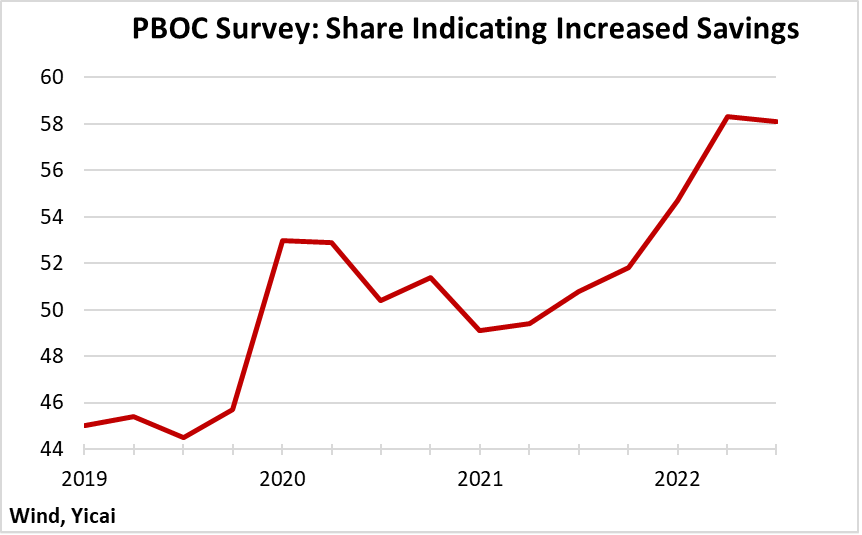 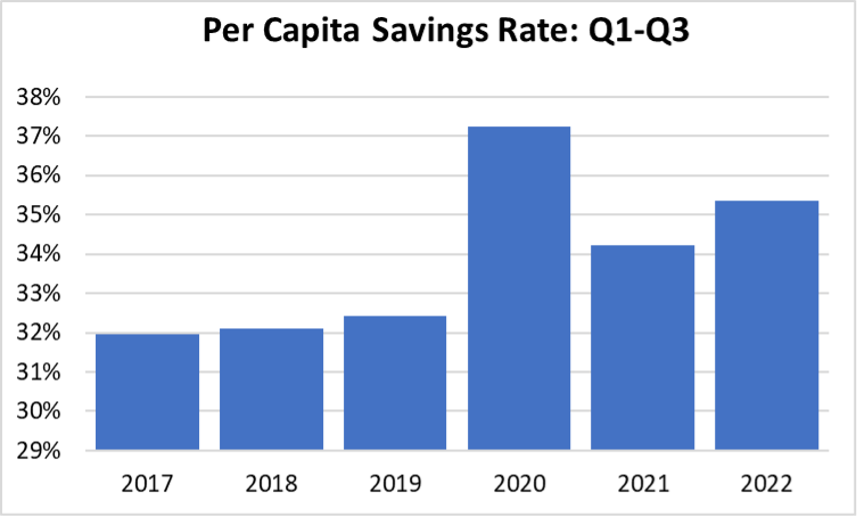 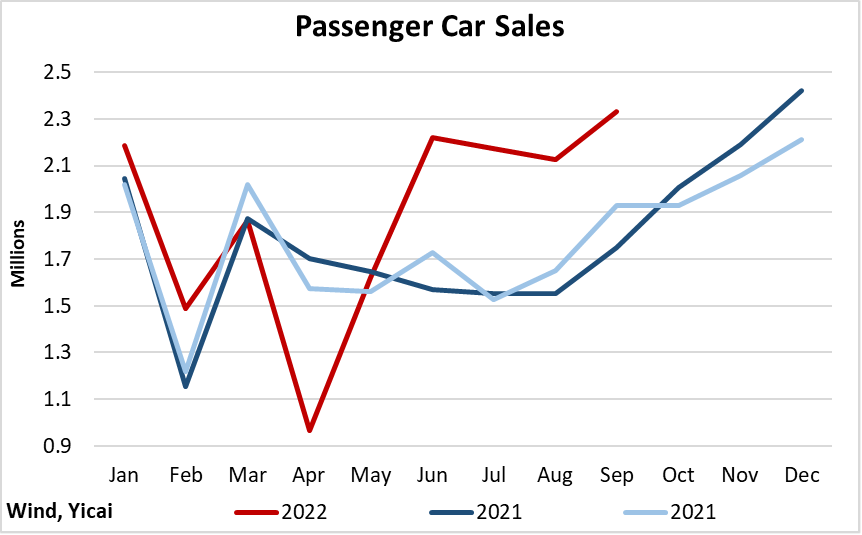 Notwithstanding the negative consumer sentiment, the labour market is holding up well. The unemployment rate in September was 5.5 percent, somewhat higher than pre-pandemic levels (Figure 8). The increase in the unemployment rate has come from youth unemployment. This appears to be primarily the result of increased labour supply (a large number of new graduates hitting the job market) rather than depressed labour demand. 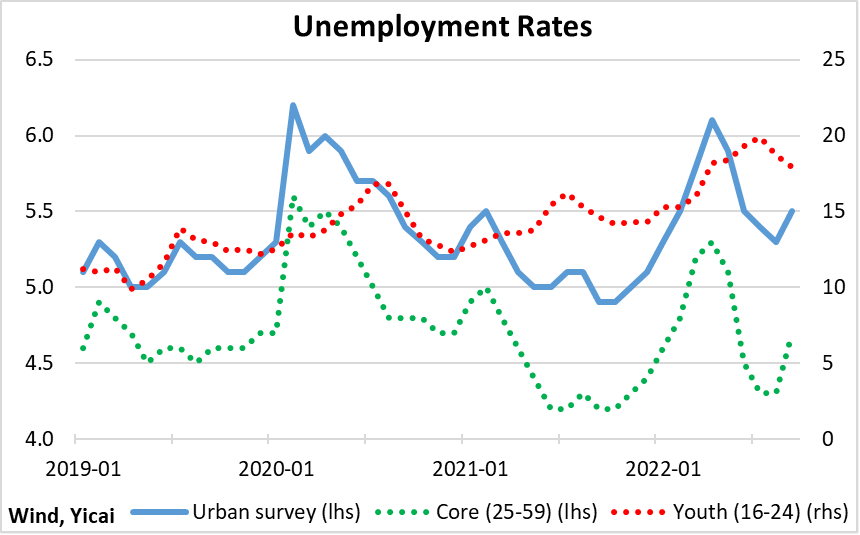 Average weekly hours worked in Q3 were quite high compared to the same quarter in recent years (Figure 9). This means that, even though GDP is still below trend, there is more than enough work to keep existing employees busy. Elevated hours worked suggest that firms could increase their staffing more aggressively as the uncertainty over the economy’s prospects fades. 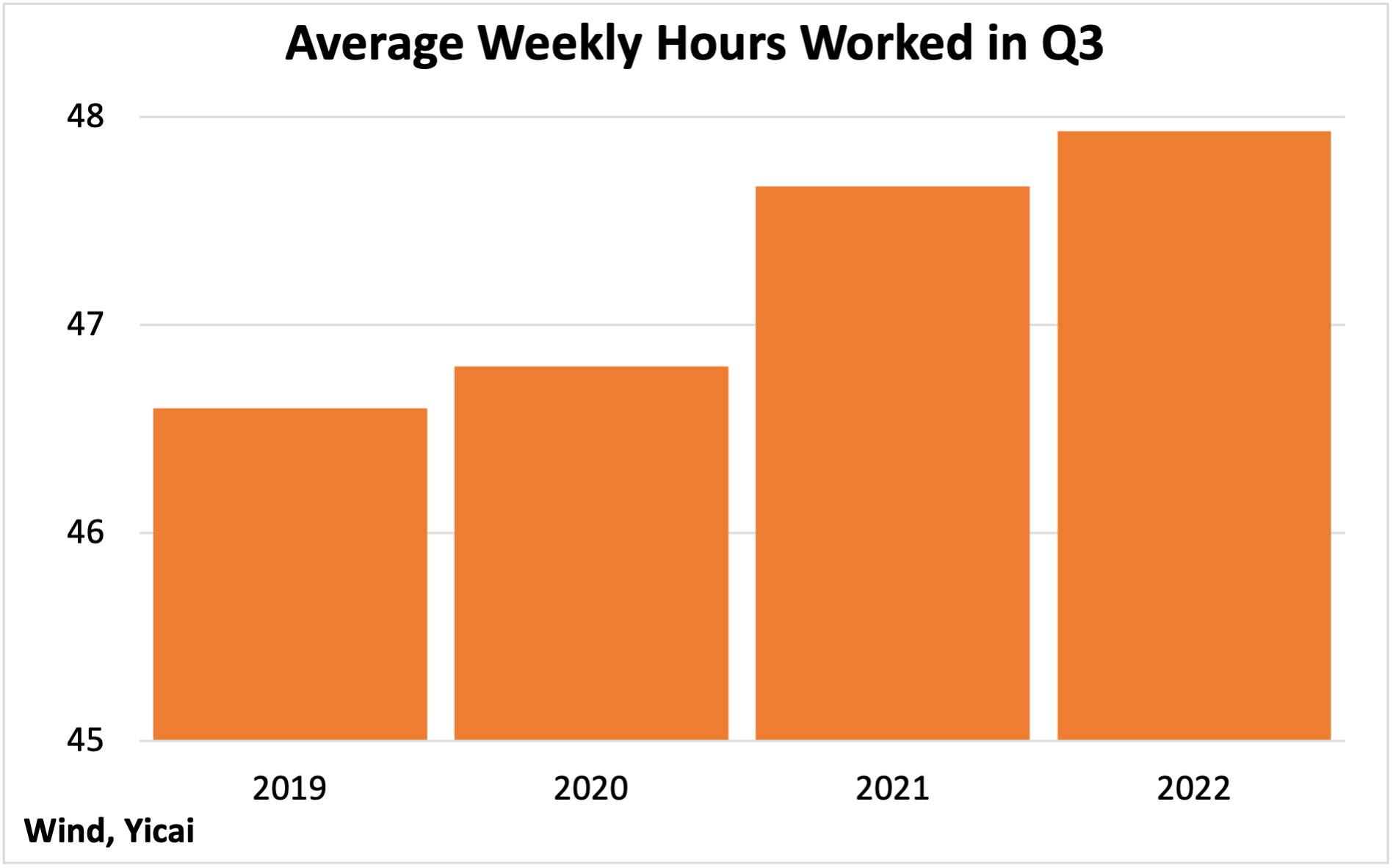 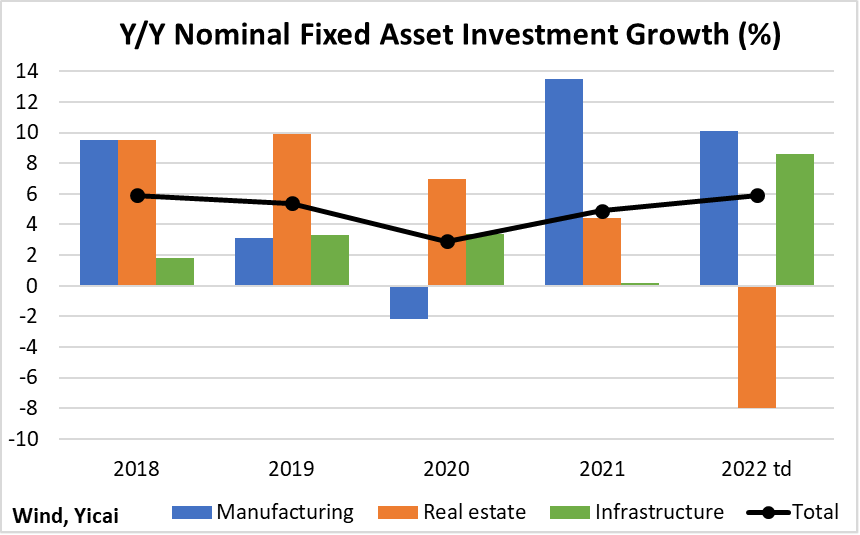 A rebound in real estate investment is unlikely until new home sales have bottomed out.

On a monthly basis, the year-over-year fall in the volume of new property sales reached its trough in April (Figure 11). While sales in September were still 18 percent below year-ago levels, August’s cut in the loan prime rate, smaller down payments for second homes in popular cities and higher lending quotas for provident funds appear to be having a positive impact on sales. 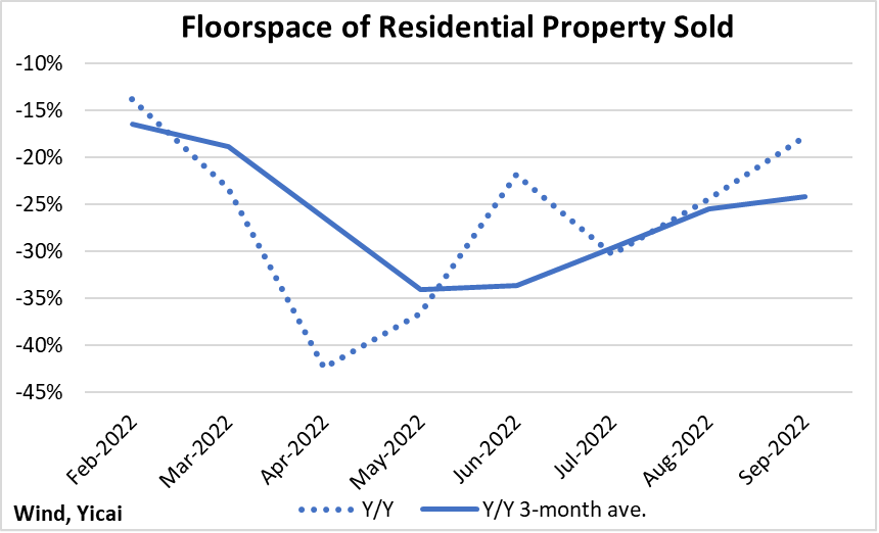 With consumption and investment both weak, the economy has become more reliant on fiscal and monetary support. The cumulative government balance so far this year has fallen to CNY-3.7 trillion. This exceeds the deficit in the first nine months of 2021 by CNY 2.2 trillion (Figure 12). The larger fiscal deficit comes from falling revenues, as expenditures have only increased modestly. The swing in the deficit represents close to 3 percent of GDP in economic stimulus as a result of the play of these automatic stabilizers. 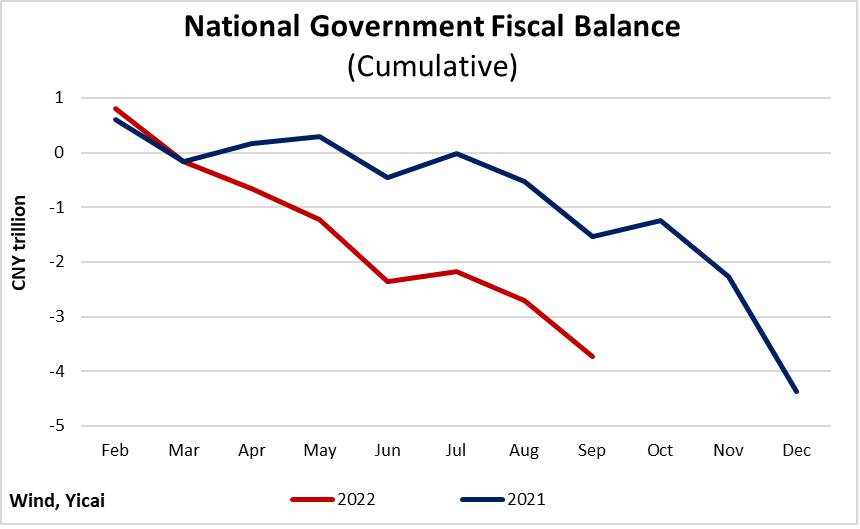 Interest rates have fallen somewhat less sharply during 2022 than they did in 2020 (Figure 13). Aggregate credit is growing at its pre-pandemic rate despite interest rates that are about a percentage point lower than in 2019. 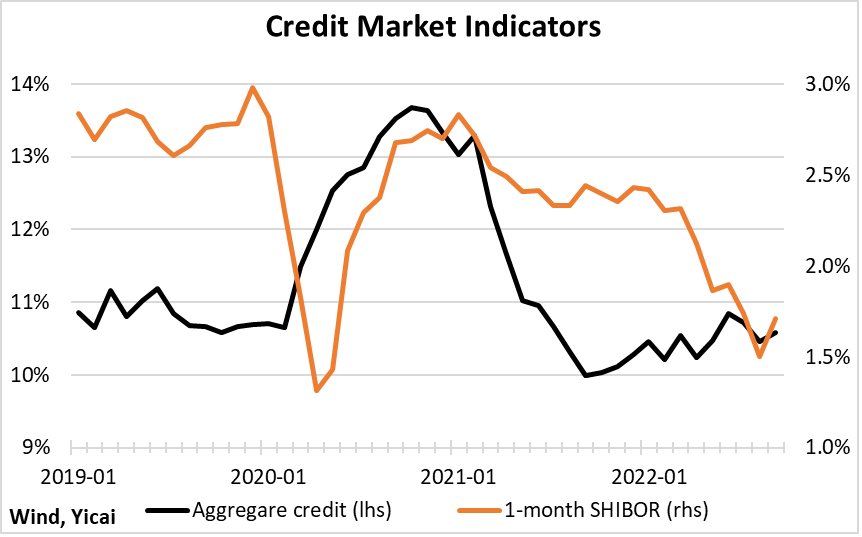 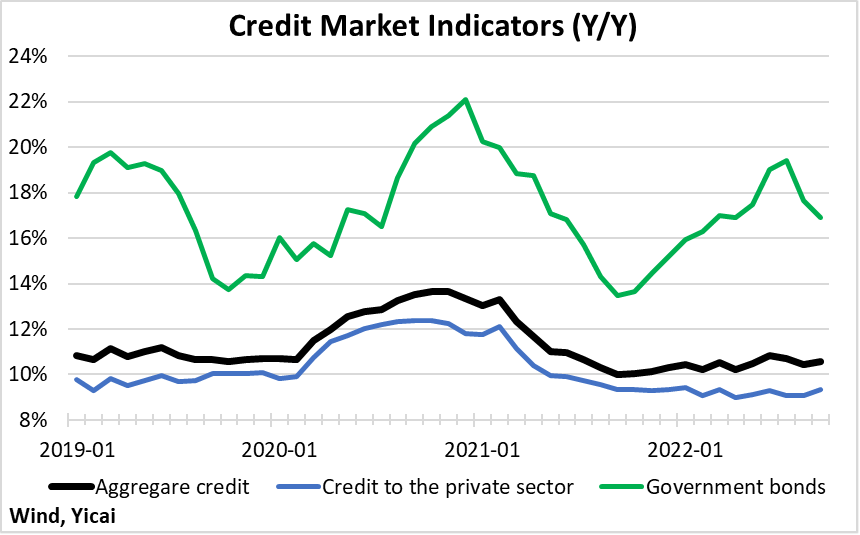 As noted above, the external sector has been a source of strength for the economy. So far this year, exports are close to 50 percent higher than those in 2020 (Figure 15). Net exports have consistently contributed about a percentage point to overall GDP growth.

However, there are concerns that with the major economies slowing this year, net exports may make a smaller contribution going forward. Moreover, demand for personal computers is falling now after a prolonged period of strength in late 2020 and early 2021.

Luckily, China benefits from a very diversified supply of exports. Indeed, automobile exports are up close to 60 percent in the year-to-date and China has displaced Germany as the world’s second-biggest auto exporter (behind Japan). 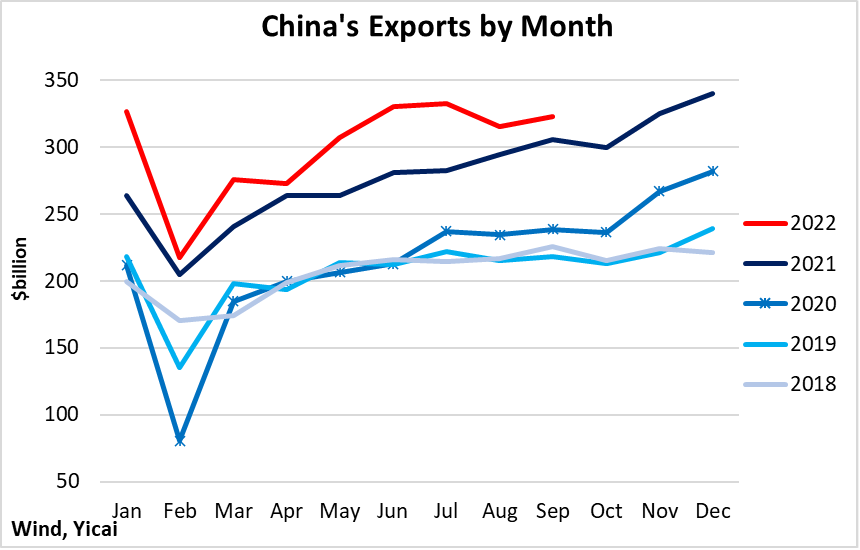 Looking forward to the fourth quarter, the key variable is the evolution of the pandemic and the government’s response.

New cases, so far in October, have averaged 1312 per day. By comparison, they averaged 926 in the second quarter. Thus, policy needs to chart a difficult course between protecting public health and restoring consumer confidence.