America's GDP Drop is a Reality Check for the Global Economy 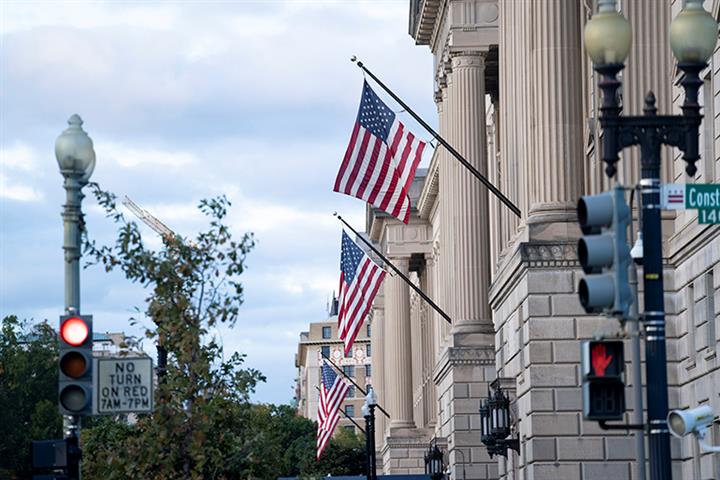 America's GDP Drop is a Reality Check for the Global Economy

(Yicai Global) April 29 -- On Thursday it was announced that in the first quarter of 2022, the Gross Domestic Product of the United States unexpectedly dropped by 1.4%, with growth having previously been forecast at +1%. The drop seemed to encourage markets as it promoted hopes that planned interest rate rises by the Federal Reserve will be held off given the prospect of slowing down the US economy. However, this barely makes the bigger picture more positive as the country continues to grapple with burgeoning inflation and wider uncertainty to the global economy at large. Ultimately, the trajectory of “covid recovery” has come to an end, and suddenly Biden’s policies are not as successful as he claimed they were.

The story of the American economy across the past two years has been that of a rollercoaster ride. Faced with a huge slump and drop in activity amidst the onset of covid-19, US leaders sought to forcibly haul the economy out of recession by a resort to extreme levels of stimulus and liquidity. Both Trump and Biden poured trillions of dollars into the economy, giving every citizen cheques in order to kickstart consumption again. For the short term this policy worked, the US economy indeed roared back in 2021 and GDP recovered quickly. Biden wasted no time taking credit for the recovery and vindicated it as a success of his own policies, claiming the greatest US job numbers in decades.

However, one fundamental rule of American commentary and reporting on the economy is that it always tends to be more optimistic and upbeat than things actually are. Whilst coverage of China’s economy is always negative, coverage of America’s is always positive and what was essentially a forced kickstarting of the US economy from covid was misleadingly framed as rapid growth, which hid its underlying problems. The massive overheating of the money supply by loose monetary and stimulus policies quickly contributed to surging inflation. For most of 2021, the administration sought to write this off as “transitory” but now it is quite obvious that is not the case.

This inflation cycle has also been triggered by the administration’s stubborn and irrational insistence on maintaining politicized tariffs on imports from China to serve the new consensus on protectionism. Not only did these tariffs fail to bring jobs back to the US, but they did not as intended serve as a deterrent for trade with China either. The consequence of this was a boom in consumer demand which saw US-China trade skyrocket in 2021, with China being the only country that had the manufacturing and logistical capacity to meet the needs of the American market. This factor contributed significantly to the inflation boom, with businesses rising prices across the board to offset tariffs and other supply chain constraints. Inevitably the continuing rate of inflation has begun to eat into the cost of living.

Thus, against all expectations, US GDP has, in fact, declined in the first quarter of 2022, a factor that nonetheless should also be weighed against other uncertainties too such as the Russia-Ukraine conflicts, surging energy prices, and of course the ongoing pandemic. Unsurprisingly, US commentators continue to be upbeat about the situation and are writing it off. Indeed, there is no indication yet that this may steep into a recession. However, these efforts to play it down also overlook the reality that America’s post-covid-boom is over, the US economy is almost certainly going to miss its end of year forecasts by economists, and that if there is growth, this growth is going to be small. This is worth keeping in mind when speculating about China’s 5.5% target.

This puts the Biden administration in a difficult situation politically. Having been riding on covid recovery numbers, he no longer has that advantage and likewise does not seem to have a plausible answer to the inflation crisis, with his personal approval rating now being less than that of Donald Trump. This may prove extremely damaging for the Democratic Party in the run-up to the Mid-term elections, with Republicans very eager to criticize his economic record. If the White House truly has any sense, it should immediately seek to wrap up a win by engaging in trade negotiations with China, seeking to secure a bilateral deal, and dropping tariffs in the view of attaining greater market access. If it wasn’t clear already, this “America First” outlook on the US economy is proving to be disastrous and a course correction is desperately needed. Yet, on a global level, it also reminds us that this is a reality check, the post covid boom is thoroughly over, and a difficult rest of the year lies ahead.