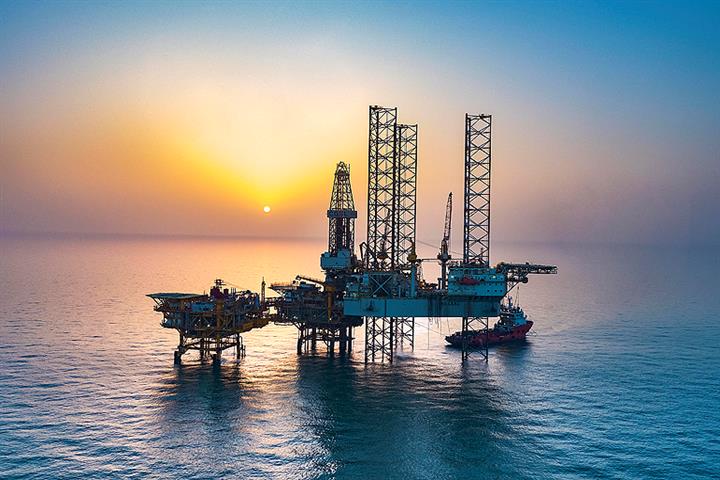 (Yicai Global) March 11 -- The China National Offshore Oil Corporation (CNOOC) announced Monday that it discovered a field in the Bohai Sea, near the city of Tianjin, holding estimated reserves of crude oil and natural gas totalling 100 million tonnes of oil equivalent, capable of producing of a daily output of 300 tonnes of oil (2052 barrels) and 150,000 cubic meters of gas respectively, making it the largest of its kind within China. The discovery comes after two years of preparation and construction on the Bozhong area. Production is scheduled to start in 2023.

The finding, and especially so its location, is a major strategic gain for China and its quest for greater energy dependency, traditionally a major Achilles heel for the country given its reliance on foreign crude imports and surging domestic energy demand, which has contributed heavily to the geopolitics of issues such as the South China Sea and the Belt and Road initiative. Although this will be far from enough to meet China’s entire demand, this discovery will be undoubtedly important to the country’s development.

China is one of the world’s largest consumers of oil, and the largest importer of crude in the world. With a population of 1.4 billion and a booming industrial economy it’s not hard to understand why. Despite efforts by the government to shift towards renewables and the boom of the electric vehicle market, this demand is only going to inevitably grow. Oil is a prerequisite for national development, and the long-term strategic dilemma that China’s leaders have faced is that the country has never had enough of its own domestic resources enough to facilitate its bulging needs, subsequently creating a growing reliance on foreign providers.

China imports its oil from a number of countries. These include primarily the Persian Gulf states in the Middle East, including Iraq, Saudi Arabia, Kuwait, Oman and the UAE (which collectively make up 43%), but also the Russian federation, the United States and several countries in Latin America. Aside from Russia, the transmission of these supplies all involve one common route: shipping. On a strategic level, Beijing has long felt vulnerable about its energy security. The Middle East oil trade for one, passes through the Indian Ocean and the Strait of Malacca, and the South China Sea in order to home ports, areas which are being increasingly militarized by the United States navy as part of its “Indo-pacific strategy”.

China’s response to this has been to promote the Belt and Road initiative as a means to diversifying its energy supply routes, financing infrastructure which changes the game. This has included for example, the construction of the China-Pakistan Economic Corridor (CPEC), including the development of Gwadar port and infrastructure up to Xinjiang in order to create land routes bypassing India, the construction of transcontinental trade routes and pipelines connecting China with Russia to establish new supply lines, as well as associated projects in Malaysia and Myanmar. This makes it more difficult for the United States to quash China’s energy as a strategic weapon in a conflict scenario, but it does not change the game that China remains dependent on foreign energy.

The discovery in Bohai however, offers some hope and respite. The oil and gas field are situated within the heartland of China’s waters and territories, and not in a position where any foreign power can contest or challenge it. In turn it offers a small opportunity for China to reduce its reliance on foreign suppliers and provide profit internally from the massive revenue it will provide. As quoted in the China Daily: “the new field is expected to play a pivotal role in helping the company (CNOOC) produce 40 million tons of crude from the Bohai oilfield during the 14th Five-Year Plan period (2021-25).

But this of course will not change the game entirely. The pressure is still on for China to expand the usage of renewables, reduce emissions and to articulate its own broader energy dependency, and irrespectively the local demand for energy, especially in China’s cities, will continue to grow. This will nonetheless take the pressure off the situation within the East and South China Seas, and thus compliment China’s options and energy security.