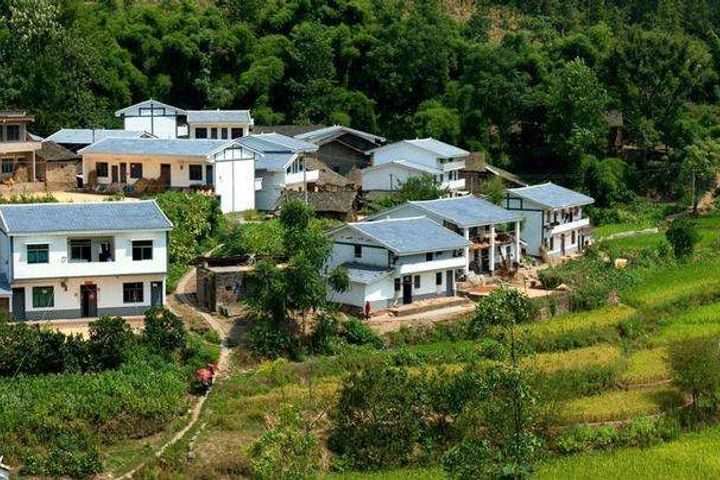 (Yicai Global) Dec. 12 -- Chengdu, capital of southwest China's Sichuan province, is piloting a program under which farmers can voluntarily waive their housing land use right in return for some economic compensation. The program aims to ensure effective utilization of local land resources.

The collective ownership of rural land is still common in rural communities in China. Under such regime, farmers enjoy the right to use homestead, but shall not circulate their homestead on the market.

Qionglai and Pengzhou are the main pilot areas in Chengdu where farmers are encouraged to voluntarily waive the housing land use right. As the national pilot area of balancing urban and rural reform, Chengdu plans to carry out the reform across the city before the end of the year to ensure successful implementation of the pilot program and achieve results before 2020.

Waiving Homestead to Live in Cities

During the reconstruction process in the aftermath of the earthquake hitting Lushan, Sichuan, in April 2013, some migrant workers from local villages were unwilling to rebuild their houses because they had already settled in cities, Xu Caixiang, chief of policies and regulations division at the Qionglai Bureau of Land and Resources, told Yicai Global. Qionglai has rolled out the policy for voluntarily withdrawing homestead in return for compensation, with a view to encourage the farmers to concentrate in cities and towns.

Under the policy, the local government will provide any villager who voluntarily waives the homestead and migrates to a city with a lump-sum monetary indemnity and 1-1.5 percent of house purchase subsidy.

Finding the offer attractive, some 411 households voluntarily and completely withdrew from their homestead back then, while 123 households chose partial withdrawal.

The formulation of homestead withdrawal mechanism can achieve a multi-win situation, Guo believes. The reclamation of some homestead expanded the farmland space. The compensated withdrawal can also solve the problem of insufficient accumulation of peasants, which slow down the pace of their "citizenization." Finally, the mechanism can provide favorable conditions for the development of the collective economy, Guo explained.

Although it looks promising, "no more than 10 households have withdrawn from their homestead in Pengzhou since the pilot project has started," said Zhang Huali, head of land cadaster unit at the Pengzhou Bureau of Land and Resources. As the village did not have any funds, there was no way to compensate villagers who were willing to waive their land use rights. Therefore, any potential investors will have to negotiate with the village administration and villagers for compensation to complete any exit process.

The fund issue is the key factor to formulate the rural homestead withdrawal mechanism, Guo stressed. However, most rural collective economic funds exist in name only, and villagers who are willing to accept the offer are mostly located in remote mountainous areas with weak financial strength.

The withdrawal process from rural homestead is actually a "buyer's market," which should regard the source of funds as the main priority, Xi Caixiang believes. Unlike state-owned land which enjoys stockpiling, the comprehensive land improvement is the major way for rural homestead withdrawal.

The areas with no project approval cannot easily withdraw due to lack of funding source, while the most rural homesteads are scattered and difficult to develop. Investors only eye places where they can develop easily.

In the hilly and mountainous regions, only the areas endowed with tourism resources will be able to attract investors' attention as they prefer to build tourism service facilities such as bed and breakfast and other types of hospitality units, Zhang told Yicai Global. In addition, construction can only be carried out on the original site of the homestead with no change in location. Thus, there is smaller room for investors to make choices.

The standard for compensation is being explored gradually. "We are moving ahead carefully, as there is no standard or a system for assessment of homestead compensation. The only requirement is that the price shall not be lower than the price of land consolidation and construction index of Chengdu, namely CNY300,000 (USD45,000) per mu."

Xu said However, the standard of compensation for the farmers in Qionglai for giving up on homestead is set as CNY250,000 per mu after completion of the post-disaster reconstruction policy. Remote homestead areas also benefit from the same rate.

Creation of a System Platform Is Essential

The farmers' leaving homesteads and therefore coming of such collective land into the market are under the spotlight. But Guo describes the situation with such terms as "limited group" and "limited demand."

"There is huge uncertainty in terms of making the transition. To reserve the homestead in the village represents a guarantee, while exiting will mean permanent loss of eligibility for living in the village, thus the majority of them wouldn't like to exit," he says.

For most farmers, the land still remains to be "last straw to clutch at" for the foreseeable future, Guo told Yicai Global. Any voluntary exit from rural homestead will only be a realistic choice for a small part of village households in the short term.

After the major earthquake in Sichuan, only 1.9 percent of village households voluntarily applied for homestead compensation in the areas involving land use for urban and rural construction in Qionglai, he disclosed.

The rate is not high, but the quantity is not an index judging the success of the reform, Guo believes. A platform should be established to facilitate the process so that farmers could enjoy property rights, he says. An innovative mechanism for voluntary withdrawal from rural homestead with compensation is only one task among various rural reforms.

In order to enhance the participation and success rate of such voluntary exiting, supportive systems and reforms should be promoted in coordination, focusing on the land system reform to lay a solid basis for the rural reforms, Guo suggests.