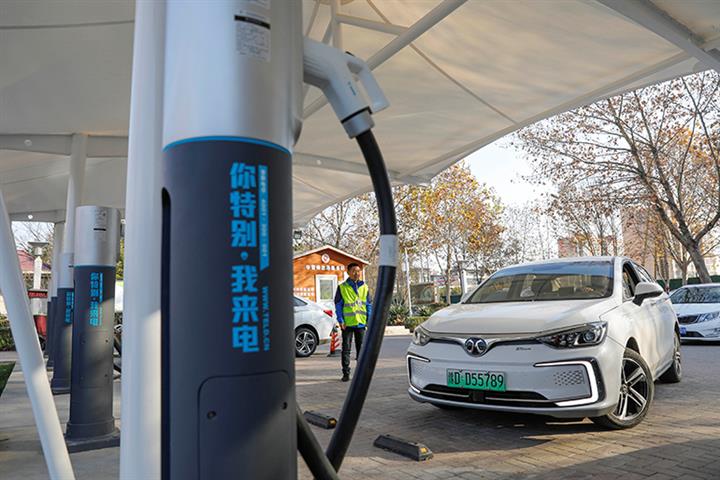 (Yicai Global) Dec. 6 -- China’s new energy vehicle sales may rise more than two times this year from the record-breaking year of 2020, according to an automotive think tank executive.

After that, 2022 sales should reach five million NEVs, making up more than a fifth of all car sales in the country, despite the production capacity, chip, and battery limitations, Ouyang Minggao, vice president of China EV100, said during a media briefing recently.

Last year, almost 1.4 million NEVs were sold in China, reaching a historic high and a nearly 11-percent increase from 2019, according to the China Association of Automobile Manufacturers. In the first 10 months of this year, sales already surpassed 2.5 million units.

"The new energy vehicle market growth already beat the expectations this year, but this was also logical," said the VP. It resulted from technological advancement, enriched product portfolios, and policy support, he explained. Thus, both sales volumes and the corresponding penetration rates rapidly increased on a month-to-month basis, he added.

The direction is upward. By 2025, China’s annual NEVs sales volume will range from seven to nine million units, said the think tank VP. The corresponding ownership should exceed 30 million cars. By 2030, sales should climb to a point between 17 and 19 million units. Vehicle ownership should be close to 100 million by then.

The boom is related to technological leaps. The improvement of battery and smart driving technologies has reduced the cost of production, enhanced the performance, and enriched NEV makers' portfolios while providing consumers with more options, said Ouyang. The share of individual purchasers has already risen to nearly three-quarters of the NEV market's total, he added.

But consumer demand will be put to the test soon. NEV subsidies will be fully phased out next year, said Zhang Yongwei, vice president of China EV100. That means that the NEV sector enters a new more market-driven phase, he added.