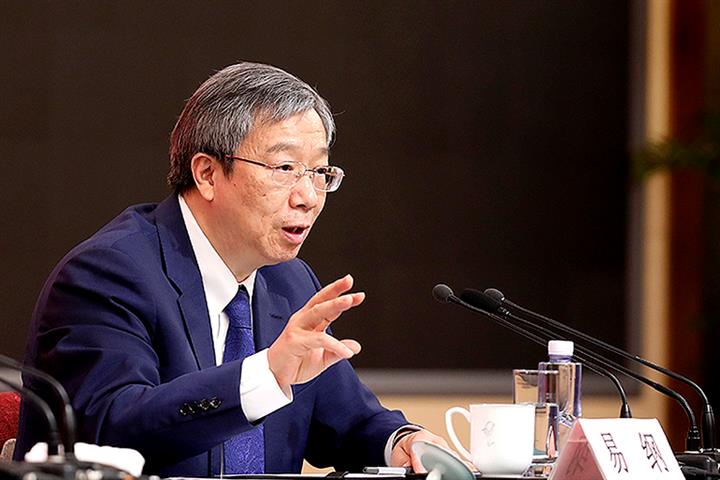 China's CPI to Rise Less Than 2% in 2021 as Inflation Is Under Control, PBOC Chief Says

(Yicai Global) June 10 -- China's consumer price index growth will remain below 2 percent on average this year as inflation is not excessive, according to the central bank chief.

The CPI is expected to make bigger moves in the second half than in the first half of 2021, Yi Gang said at the Lujiazui Forum today. But during the 12 months, the year-on-year increases should remain below 2 percent on average, he added.

In May, the inflation gauge ticked up 1.3 percent from a year ago, its fastest pace since last September, the National Bureau of Statistics announced yesterday.

China's producer price index has been surging faster this year, which has something to do with last year's lower base, Yi said. The PPI, an indicator of corporate profitability, added 9 percent last month from a year earlier, accelerating its pace of rising from April.

Prices of commodities, such as crude oil, have been increasing rapidly, and a short-term uptick in global inflation is a fact, said the head of the People's Bank of China. But big disagreements exist on whether such inflation is sustainable in the long run, he added.

China should remain vigilant regarding inflation and deflation pressures from all aspects in light of the uncertainties caused by the Covid-19 pandemic, and the macro situation, the chief added.

The quickly rising economic output is not stoking inflation, according to the official.

On June 9, the World Bank upgraded its forecast for China to lead the global recovery by expanding its economy to the tune of 8.5 percent this year instead of the earlier estimate of a 7.9 percent increase.

Yi shared his views on various aspects of monetary policy.

The country's interest rates, which are lower than those of emerging economies but higher than those of developed ones, remain at an appropriate level and are conducive to the steady and healthy development of the markets, he said. The central bank should continue to unleash the potential of the loan prime rate reform, he added.

The PBOC will continue to improve the managed floating exchange rate regime based on market supply and demand with reference to a basket of currencies. The central bank will keep the yuan's forex rate basically stable at an appropriate and balanced level, Yi added.