(Yicai Global) Sept. 19 -- On September 15, China's National Bureau of Statistics (NBS) released the key economic indicators for August. Not only were the data weak, but they once again disappointed the experts surveyed by the Yicai Research Institute (Table 1). The experts’ biggest error was their over-prediction of retail sales, but industrial value-added also slowed significantly more than expected.

A spike in Covid infections, concentrated in the city of Nanjing, dampened consumers' desire to shop in August. The infection rate in China remains well below those of other countries. Still, on average there were 60 new infections a day in August, up from 39 in July.

Not surprisingly, the pandemic's effect was felt most acutely in the service sector. The growth of catering sales fell from 14 percent in July to almost -5 percent in August (Figure 1). There was also a sharp drop in air travel, with passenger trips in August falling 52 percent below last year's level and to about a third of 2019's. There was further weakness in auto sales in August. This was, in part, related to the slowdown in car production. In addition to generalized consumer caution, base effects help explain why the growth of goods ex-autos fell from 10 percent in July to 4 percent in August.

Not only have Chinese consumers' desire for goods and services cooled, they no longer appear to be buying property either. Sales of residential floorspace were down 14 percent year-over-year in July-August (Figure 2). That drop comes after near-30 percent growth in the first half of the year. It likely indicates that homebuyers are still digesting their earlier purchases. However, a prolonged slowdown in apartment sales could spell trouble for indebted property developers, who are counting on a buoyant market to help them reduce their indebtedness. Indeed, construction activity contracted even more rapidly than sales in the last two months, as developers try to meet the "Three Red Lines" the government established to manage their leverage. 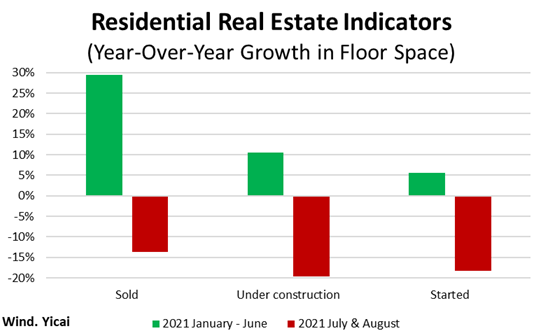 Property developers are not the only ones deleveraging. There has been a dramatic reduction in credit expansion. In August, Total Social Financing – the broad credit aggregate – grew by 10.3 percent, 3 percentage points lower than in January. Borrowing by both businesses and governments has slowed significantly (Figure 3). The one-month SHIBOR interest rate has fallen from 2.7 percent late last year to below 2.4 percent in recent days, suggesting that credit conditions remain sufficiently accommodative despite slower credit growth. 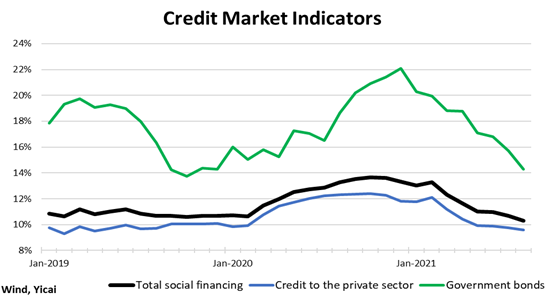 While domestic demand has been weak, China has benefitted from strong overseas sales. Around the world, supply has not been able to keep pace with the rebound in demand, which is in an earlier stage of recovery than in China. JPMorgan's Global Manufacturing Purchasing Managers' Indices (PMIs) show that a wide gap has opened between New Orders and Output (Figure 4). New Orders are still running well ahead of their pre-pandemic average, while Output has slowed sharply. Supply bottlenecks that restrain production are widely reported in both the US and the EU. China is battling supply concerns as well, but with the pandemic better controlled here, Chinese factories are in relatively better shape and exporters are able to gain market share abroad. 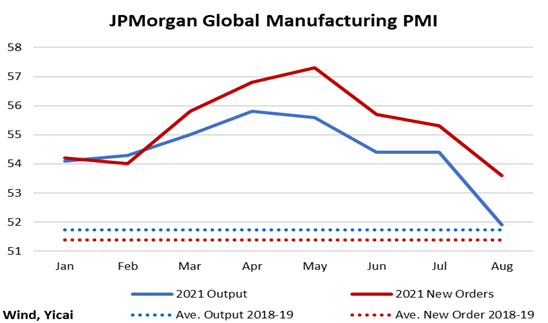 In August, China's exports scraped USD300 billion, up from USD234 billion a year ago (Figure 5). The increase was broad-based across both destinations and product groups. This points to China's supply chains having healed more completely than those of its trading partners. With overseas inventories at very low levels, re-stocking demand, investment in computer equipment and the continued rotation in consumption from services to goods should support China's exports through year-end at least.

Notwithstanding strong foreign demand, the month-over-month increase in Industrial value-added was, once again, very weak (Figure 6). The chip shortage continues to crimp output in the auto sector. China is hardly unique in this regard as global automakers have had to curtail production. China has also been cutting the production of steel and aluminum in an effort to meet environmental goals. Production of these metals was down 16 percent and 6 percent respectively in August from their peaks in the spring. 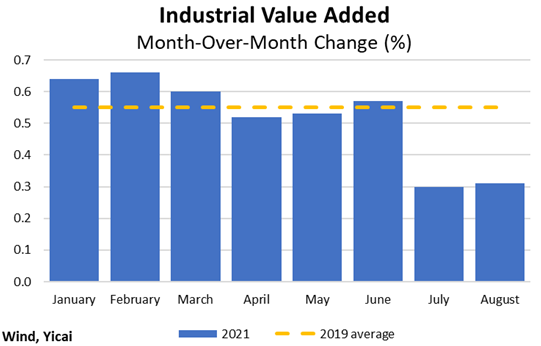 The weakness in industrial value-added comes after a remarkable post-pandemic run. The level of production is more than 9 percent higher than we might have predicted, based on its pre-pandemic trend (Figure 7). That's about a year-and-a-half of additional production at pre-pandemic rates of growth. Moreover, for the year-to-July, industrial firms' profit margins were 7.1 percent. If maintained to year-end, 2021 would be their most profitable year since 2011. 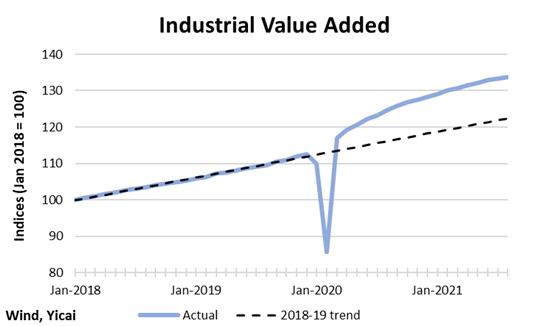 The high level of industrial output has been a major reason behind the robust Chinese labor market. New job creation is tracking pre-pandemic levels (Figure 8) and the NBS reported that more than 85 percent of the annual employment target had already been attained by August. 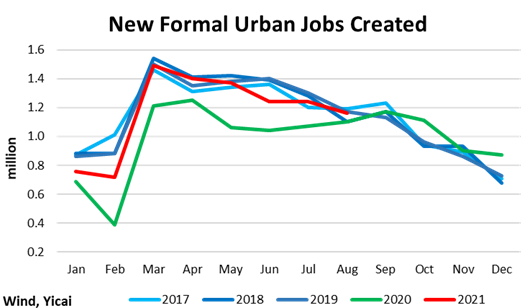 The strong demand for labor can also be seen in the hours-worked data. As was the case in July, workers put in more hours last month, compared to August 2020 and August 2019 (Figure 9). There was also a modest improvement in youth unemployment, which fell to 15.3 percent from 16.2 percent in July. Nevertheless, youth unemployment remains more than 2 percentage points higher than in August 2019.

To summarize, the Chinese economy is slowing because of consumer caution due to the pandemic and constraints that limit the production of goods. Most of the weakness is in the service sector. Output in the goods sector is also slowing but its level is high, thanks to strong foreign demand. Since the labor market is performing as hoped for, we do not expect the authorities to support the economy in the near term. Indeed, policy continues to be oriented toward reducing financial risks and meeting environmental goals.