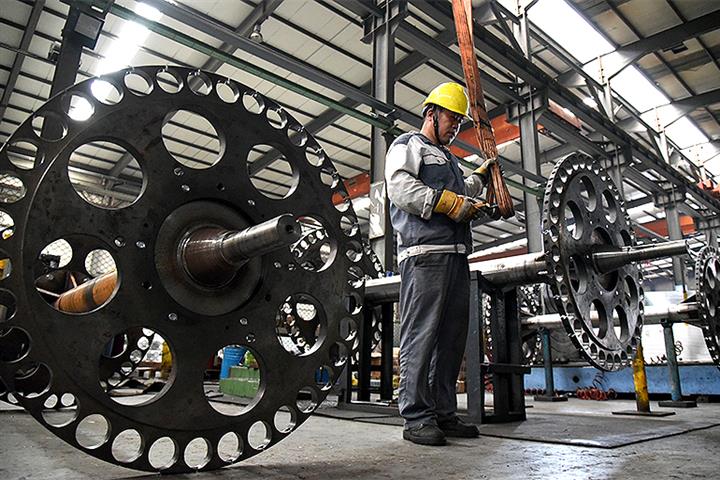 Most of the indicators still registered healthy growth rates on a year-over-year basis. But this just reflects the effect of the pandemic, which reduced last year’s level of economic activity and inflated this year’s growth rates.

The headline data came in below expectations. July’s year-over-year growth of industrial value-added, fixed asset investment and retail sales were all much slower than the median forecasts of the Yicai Research Institute’s Chief Economist Survey (Table 1).

First, there was the massive flooding in Henan Province. Torrential rains led to inundations, which killed more than 300 people and forced 815,000 to evacuate. The direct economic losses from the disaster have been estimated at CNY114 billion.

Next, there was a new wave of COVID infections. In July, there were just over 1200 new cases nationwide, 80 percent more than recorded in June. In response, several cities in Jiangsu and Hunan provinces were locked down. The pandemic’s resurgence keeps consumers from spending, especially on services like travel and dining out.

Finally, it appears that the government’s deleveraging policy is beginning to bite, especially in the property sector. China’s macro-leverage ratio peaked last September when the non-financial sector’s debt hit 271 percent of GDP. Between September and June 2021, indebtedness fell by almost 6 percent of GDP (Figure 1). While we do not have the sectoral detail, it is likely that the government’s “three red lines” are effectively containing borrowing by property developers. While this helps mitigate one of China’s key macroeconomic risks, it slows real estate activity. 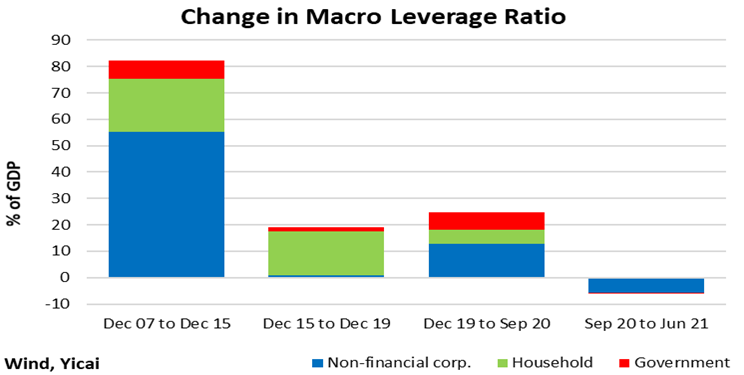 Housing sales, starts and floor space under construction all fell in July from a year earlier. While the sector could rebound somewhat in the coming months, real estate is unlikely to make a major contribution to growth during the rest of the year. With demand outstripping supply, the authorities are concerned about the potential for a spike in apartment prices. In July, they announced a series of administrative measures, which are designed to cool the market.

Industrial value-added only grew by 0.30 percent, month-over-month, in July. This is a pretty weak number. Monthly growth averaged 0.58 percent between January and June this year and 0.55 percent in 2019 (Figure 2). Autos likely weighed heavily on July’s industrial output. Moreover, crude steel output fell by close to 8 percent month-over-month in July. Tighter government policy probably played a role. In May, China’s National Development and Reform Commission issued regulations that called for steelmakers to reduce capacity. 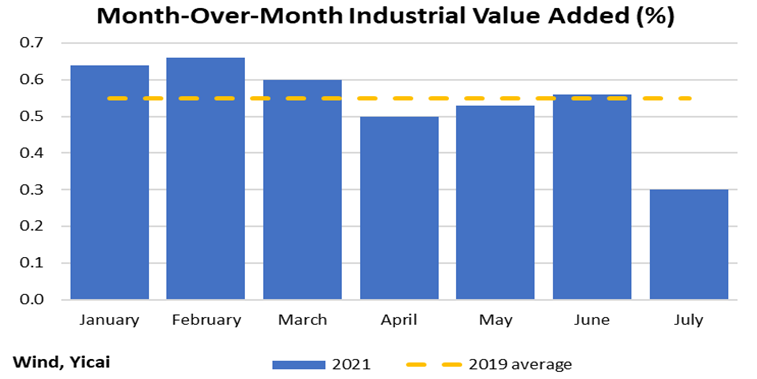 Retail sales fell, on a month-over-month basis, in July. Largely as a result of the pandemic, average monthly growth this year, 0.35 percent, has only been half as fast as in 2019 (Figure 3). 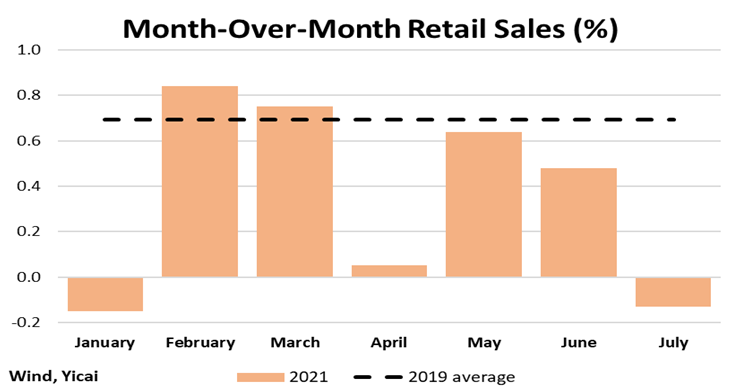 Exports, which rose by 19 percent year-over-year in dollar terms, are a bright spot. All year long, the level of exports has remained well above those of previous years (Figure 4). This is due to China’s trading partners consuming goods instead of services and their firms investing heavily in computer hardware.

There are some indications that China’s exports also benefitted from its trading partners’ restocking their inventories. Data from the US show that imports from China are typically strong when inventory levels are low (Figure 5). The exceptionally low level of US inventories suggests that American imports of Chinese goods could continue to be vibrant to year-end. 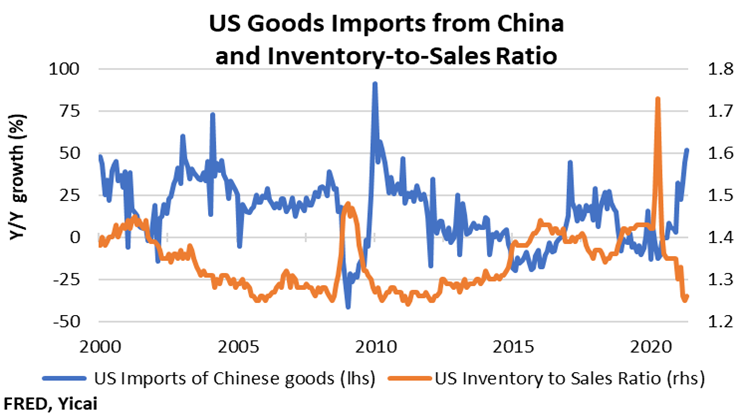 China’s labour market also remained resilient in July. New job creation returned to the pace of pre-pandemic years and was significantly higher than last year (Figure 6). According to the NBS, three-quarters of the annual employment target had already been achieved by the end of July.

The aggregate employment picture is encouraging but there are signs of a mismatch in labour supply. The youth (16-24 year-old) unemployment rate rose to 16.2 percent in July from 15.4 percent in June and 13.9 percent in July 2019.  This is, in large part, due to a record 9.1 million college graduates joining the labour market this summer. While college grads are having a hard time finding jobs, workers who are already employed are busy putting in longer hours (Figure 7). 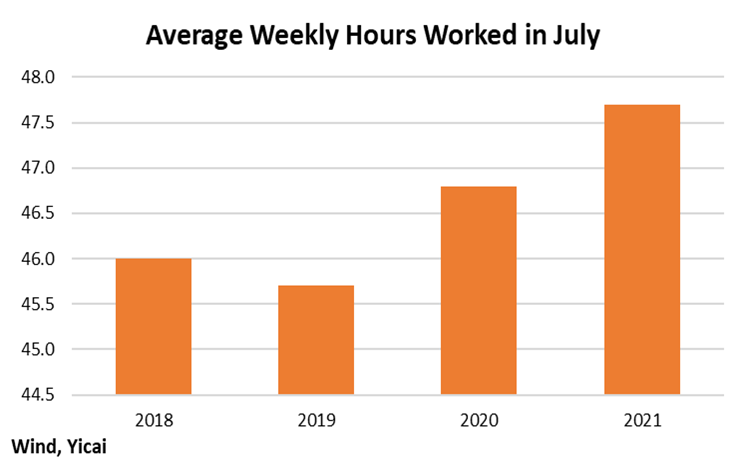 Except for the floods, the factors that depressed growth in July will continue to weigh on the economy in the months ahead. The pandemic got worse in August. While this wave appears to have peaked in the middle of the month, daily infections in August have been about double what was recorded in July. The chip shortage does not look like it will be resolved soon and it will continue to hamper auto production and sales. And policies to de-lever the economy, to stabilize home prices and to reduce steel capacity will likely be in force at least until the end of the year.

Despite the slowing, the government will not take major steps to support the economy as long as the labour market remains robust. It has targeted GDP growth in excess of 6 percent in 2021 and this should be easy to achieve.  If the economy simply maintained the level of GDP reached in the second quarter for the remainder of the year, growth would still hit 7.5 percent. Indeed, it is because the government feels that the economy is strong that it has turned its attention to reinforcing regulatory frameworks for internet finance, anti-trust, data security and education.