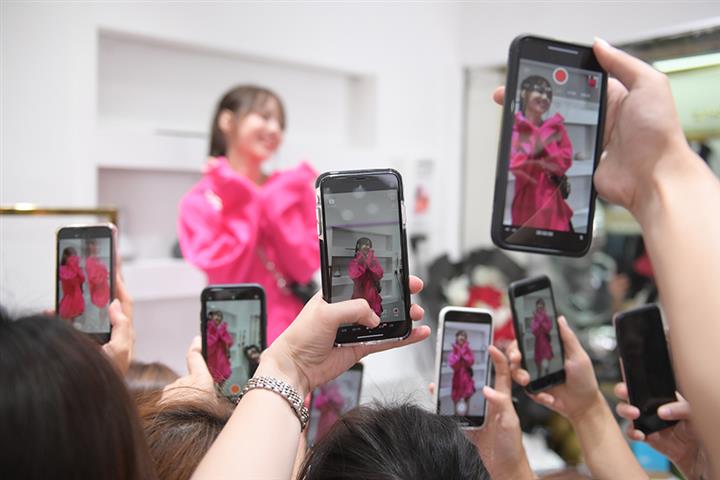 (Yicai Global) April 9 -- Garment makers based near Guangzhou in China’s southern Guangdong province were quick to act once Covid-19 struck and within a month the apparel heartland had morphed into a livestreaming hub. Now the factories are struggling to meet demand.

Nancun town is one of China’s densest clothing production centers with thousands of small and medium-sized factories packed into a three-kilometer radius. Eighty percent of China’s clothes are said to come from Guangdong province and 80 percent of that is from around the provincial capital of Guangzhou.

International buyers used to come to Nancun to buy the latest fashions, but the outbreak of the new coronavirus brought direct sales to an abrupt halt. Suppliers had to adapt quickly. Factory owners set up their own broadcasting studios and women vendors clog the airwaves promoting their wares.

There are now so many orders coming from live broadcasts that factories can’t cope, said Wo Long, president of the Guangzhou Live Broadcasting Industry Association. Many livestreaming hosts are only sleeping two hours a day, he added.

One of those caught in the upswell is Guangzhou Genuoyi Clothing.

“Millions of items of new spring fashion were piled in the warehouse after the epidemic took hold over the Chinese New Year break,” Chief Executive Ying Meilong told Yicai Global. Ying could not sleep for thinking about how it would affect the livelihood of the factory’s 2,600 workers and its upstream and downstream industry chain.

After the lunar new year holiday, Ying set about transforming his clothing exhibition hall into a livestreaming room. He contacted an agency serving merchants on Alibaba Group Holding’s e-commerce platform Taobao and they started six hours of live sales promotions each day.

“Though I was quite skeptical at first, sales exceeded CNY1 million (USD141,672) in the first three days,” Ying said. The factory’s backlog of clothes sold out in 20 days. Overall sales were even slightly better than during the same period last year, he added.

Nancun’s apparel industry park had 20 live broadcast studios up and running by the end of March, locals told Yicai Global. The park’s manager is even planning to make 20,000 square meters of land available to build these studios. It is also looking into building work for infrastructure such as e-commerce warehousing platforms equipped with logistical services linked to the live broadcasts.

There should be 100 streaming rooms available in the park by the end of the month, said Hua Nan, chairman of Yuanpai Clothing. This figure is expected to grow to the thousands, he added.

"Clothing is fast fashion, and time is life,” Hua said. “Selling a product one day or even one hour earlier is a good thing.”

Livestreaming was not well regarded before. Clothing wholesalers did well out of their brick-and-mortar outlets. In 2016 only three out of more than 20 streaming agencies survived in Guangzhou, said Wo.

This year the situation is completely different. The number of live broadcasters in Guangdong province tripled last month from the same period in 2019, the fastest growth in China, according to Taobao. And the number of streaming agencies doubled.

“We’ll continue combining our offline business with livestreaming,” Ying said. This way the firm’s wholesale customers can place their orders online from their hometown. Live broadcasting has opened a door and we will keep exploring, he added.