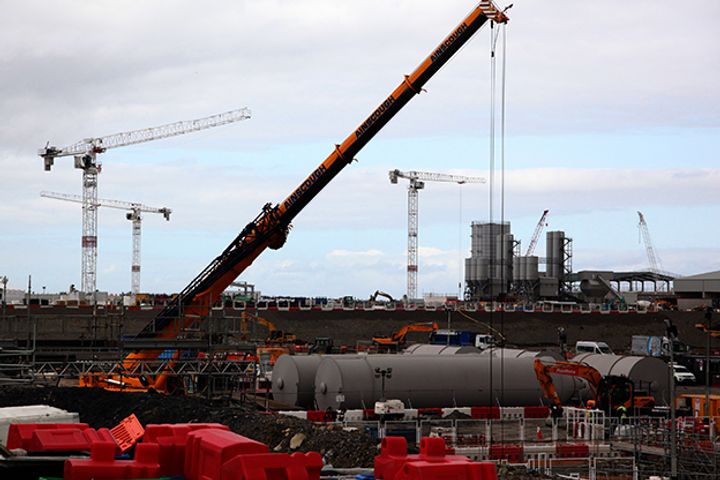 The project has advanced according to schedule since the buildout began, said Zheng Dongshan, general manager of CGN's British subsidiary. The nuclear island corridor has started to take shape, and construction of the main structure of the nuclear island will commence in mid-2019, Zheng said.

The plant is situated in a coastal area about 280 kilometers southwest of downtown London. A circular area has been cleared at the site for building the main part of the station -- the nuclear island foundation pit. The foundation of the main control room is currently being laid. The number of workers at the site peaked at more than 5,000 and is between 1,500 and 1,700 now, a construction manager said.

A consortium led by CGN, with a 33.5-percent stake in the joint venture, and Electricite de France (EDF) won the contract to build the plant's two nuclear reactors. Once opened, the plant will be able to satisfy about 7 percent of the UK's demand. It will hire around 900 employees, and reduce carbon dioxide emissions by nine million tons a year during its projected lifetime of 60 years, Zheng said. Construction of the plant will create 25,000 jobs in total, stimulating nuclear power industry chain growth in France and Britain. The project also marks the international debut of Chinese nuclear power technology.

The Hinkley Point C Nuclear Power Station is part of a blanket agreement signed by CGN, EDF and the British government to build nuclear facilities in the UK. Two other schemes, Sizewell C and Bradwell B, were also proposed under the deal, with a total investment of USD23.2 billion (GBP18 billion). The consortium has a 66.5-percent shareholding in the Bradwell B plant and will lead its construction, Zheng said. The project will be the world's first nuclear power station developed using China's third-generation nuclear reactor technology, Hualong One. It is undergoing a general review, and preparations are underway as planned.